The icicle lights we have are LEDs which is nice because they use incredibly little power and should last a long time, but has the drawback that they're slightly harder to diagnose when they misbehave.

Once I was recovered from my various maladies I pulled out the 10 strands we have to get them up on the house (starting last weekend).  One of the strands wouldn't light so I got to play the fun game of tracking down the problem.

So I started with the obvious of checking to make sure no "bulbs" (I'll say "bulb" because it conveys my meaning even though there are no actual bulbs) were missing.  And I tested the other end of the strand and was getting a solid 120V connection, so I knew the wiring was still good.

[Edit: Individual bulbs can fail like normal and have a shunt which will allow the rest of the strand to stay lit.  These bulbs are easy to find and replace (they're the only bulb unlit).  The problem I explore in this post is a bulb where the leads are broken so the power didn't make it to the shunt in the first place.]

But once you have to go beyond those steps some of the common troubleshooting techniques won't work on LED strands.  I started with my multimeter that contains an inductive AC voltage detector ("no-touch").  Since the bad bulb breaks the circuit, traditionally you can use a voltage detector to find where the circuit breaks.

Unfortunately, for whatever reason, my multimeter was detecting voltage everywhere along the strand and along each "icicle."  So that did me no good, I'm not entirely sure why.  So then you can take the obvious approach of just switching out bulbs with replacements, but the trouble is, you might have more than one bad bulb.  In which case, you won't know if you're replacing a good bulb or a bad bulb.

Instead you need to be able to test each bulb individually to know whether it is good or not.  The usual approach is a simple continuity tester (check whether a circuit exists from one lead on the bulb to the other).  But, a continuity test won't work because there is no simple circuit to test.  Unless you actually cause the LED to activate (with enough voltage) you won't have a circuit.  A continuity test only uses a very low voltage and so it will report an open circuit (bad bulb).  So, despite having a multimeter and knowing how to use it, it did me no good in finding the bad bulb.

Instead you need an LED tester.  You can make a simple LED tester using the following:  a 9-volt battery, a resistor, and a rubber band. 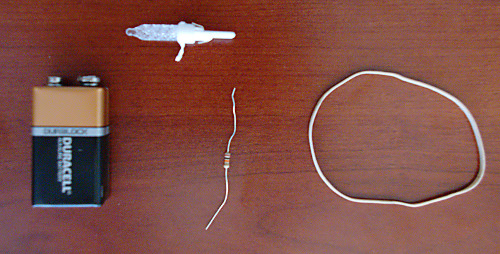 Without the resistor the only thing you'll learn is that the LED used to work because you'll blow out the LED from too high of voltage (which I did twice before finally digging one out).  The resistor I used happened to be 10,000 ohms, but 1,000 ohms should be fine too. 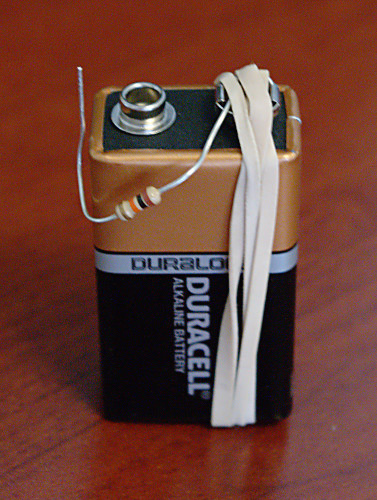 If you touch the LED leads backwards nothing will happen (LEDs are one way only).  It won't damage the LED, but it won't light up either.  Because of this your bulb should be keyed to only fit in its socket one way.  Pay attention to that keying so that you can reliably test the correct orientation and save some time. 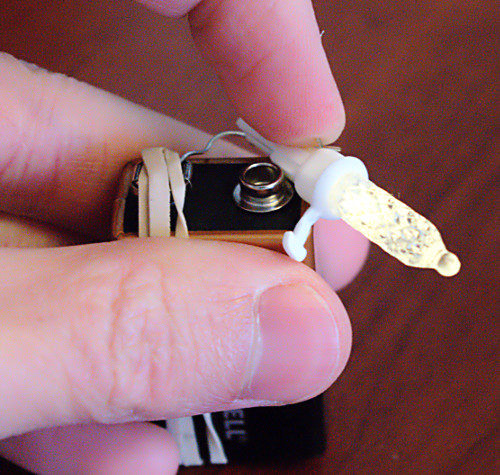 So with my makeshift tester I started popping out bulbs and testing them (the edge of a dinner knife worked great for popping the bulbs out of their base).  I was actually getting pretty quick at it and it was the 21st bulb I pulled that was bad.  Popped in a replacement and everything was working.

Okay, not a particularly fascinating story, but when I was searching the Internet for how to track down a bad LED in a strand of Christmas lights I wasn't finding much useful information (just lots of information about incandescent lights sometimes with a disclaimer that it wouldn't work for LED strands).

(And in case anyone cares, these are 70-LED icicle strands in "warm white" made by Vickerman.)