Heather has been in a toddler dance class for the past year.  They had their recital today.  Heather thought it was the most amazing thing ever.  I think she burned through 3 days worth of energy reserves during and after it. 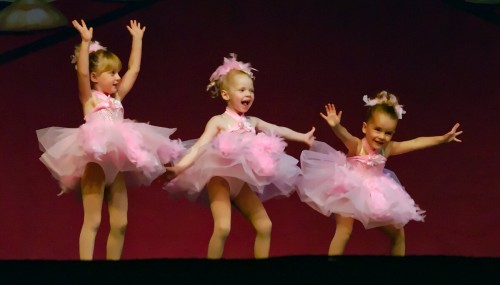 The studio strictly forbids anyone recording video during the performance (they're more than happy to sell you a DVD for $40 though).  So I only have photos.  Their pricing only really irks me because they charge admission for the recital at $16 per person.  At a rough estimate they brought in around $10,000 at the recital (held at the high school), seems like they could afford to provide the video at a reasonable price (considering everyone has to pay for their own costume, makeup, shoes, and to be in the class in the first place).

They had a picture day a few weeks ago and we bought a print from that so we'd have at least one high quality picture of Heather in her costume: 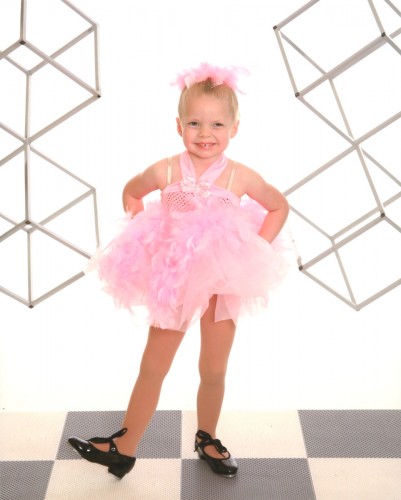 At the recital the lighting was challenging.  To compensate for low light, I used a wide aperture (and thus shallow depth of field, making focus difficult) and still needed to apply a rather aggressive noise-reduction algorithm.  And then my task was complicated by the guy in front of me who, just as Heather's class came on stage, pulled his cellphone out to take pictures.  We were sitting in the third row, so our heads were actually below the level of the stage, which is why the dancers are cut off at the shin in every picture.  So the pictures aren't amazing, but I think they get the gist across.

They gave each dancer a little medal after the performance.  No matter what we say, Heather is convinced this means she "won" and was the best dancer.  She is incredibly competitive.  We have no idea where she gets it from.  If anything, we go out of our way to downplay any competitive aspect of the activities she participates in. 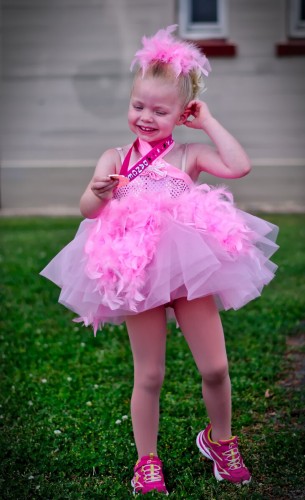 After the recital I asked her where she wanted to go for dinner to celebrate.  She chose Chick-fil-a.  We left at about 3pm and she fell asleep on the way there and on the way back and then went to bed at about 6:15pm (hence why we left for dinner around 3pm).  Going to bed she was complaining that her stomach hurt and her head hurt.  I think she's just beyond exhausted; hopefully she's feeling better in the morning.

As we were leaving the theater, Heather got tripped and fell pretty hard.  She was crying and one of the studio's employees (possibly the owner) gave her a fancy cookie from their concession stand to try and cheer her up (you can see the cookie in the last picture below).