After our Thanksgiving traveling, Christmas was a simpler affair.  We stayed in Livermore and decided to buy our tree from a lot, shipped from Oregon, rather than driving out to cut it ourselves.

In contrast to our cut-it-yourself adventures of the past, though, we did get a very nice tree.  We looked for a Douglas Fir at the tree lot, but the largest they had was barely 5 feet tall.  So instead we got this massive Grand Fir.  It's very full, very green, and the needles are fairly soft.  But I don't think it has as much pine smell as a Douglas Fir.  Economics and specialization being what they are, it was cheaper for someone to grow, cut, and ship this tree to us than it would be for someone to grow a tree here and for us to go cut it down ourselves.  I'm having a hard time selling the cut-your-own-tree Dickerson tradition.

I got the lights up on the house and added some more above the eave over the garage and wrapped around one of the trellis columns.  I had to more-than-double the number of lights we had inside on the tree to get this massive tree properly lit. 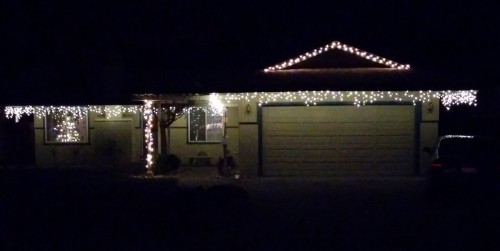 Soon enough it was Christmas Eve.  The Badger family invited us to their house for Christmas Eve.  We stayed there for a few hours, ate snacks (including l'il smokies and wassail), and hung out.  Then it was back home to get to bed and wait for Santa.

Last year Heather awoke to find various stuffed animals dressed up and sitting on the couch.  She seemed to get a kick out of that and this year she discovered the bear wearing this fairy costume.  Heather came trundling in to our room at about 7:15 am carrying this bear and being concerned / excited about the bear wearing this costume.  She insisted that she wear it instead.  So we put it on her and then headed out to the living room.

I set up my off-camera flash on a stand with a white umbrella in front of it.  In general it made the pictures all come out much better lit this year. 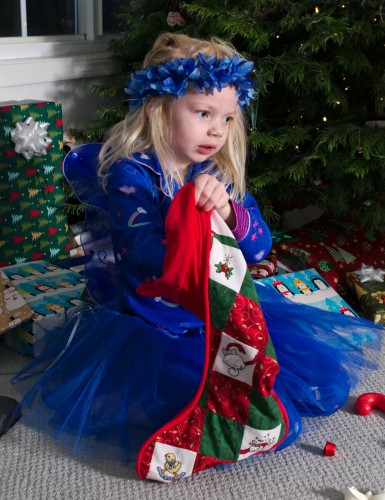 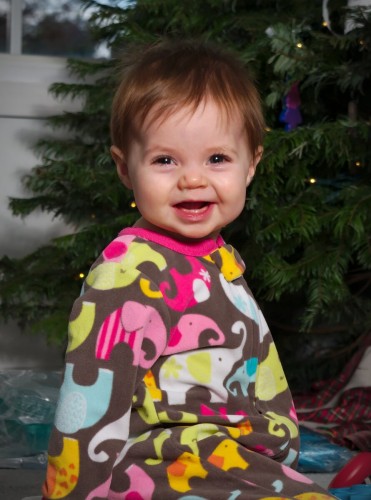 Heather received this booklet (thanks Erin!) which has layers of material on each page.  When the top layer gets wet it allows the colors behind it to pass through.  So it's "coloring" with water.  Heather had played with similar toys at friends' houses and was enthralled.  She ignored everything else and played with this for the next 48 hours straight (minus eating and sleeping). 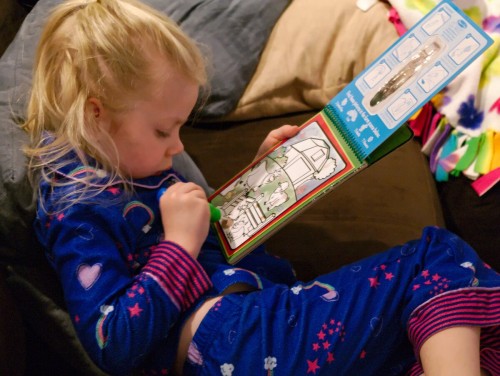 For Thanksgiving this year we drove down to Texas to visit with Jess' family.  Christopher & Jenny and their kids were going to be down from Colorado and Cameron was home from school.  Chance & Rachel and their kids live in the general area as well as Colton; so it was a pseudo-family-reunion kind of thing. 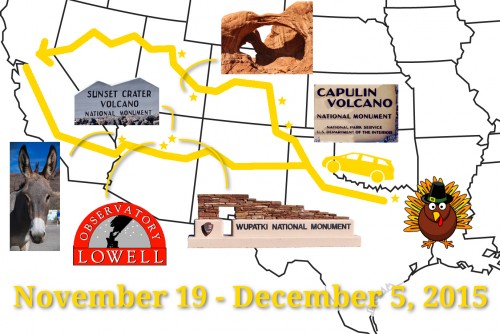 We had originally intended to leave Livermore the morning of November 19, but Heather's preschool had their Thanksgiving Feast that day around noon.  So we stayed for that and left immediately after.

Heather made the front-page of our local paper when the kids were singing the songs they've been learning: 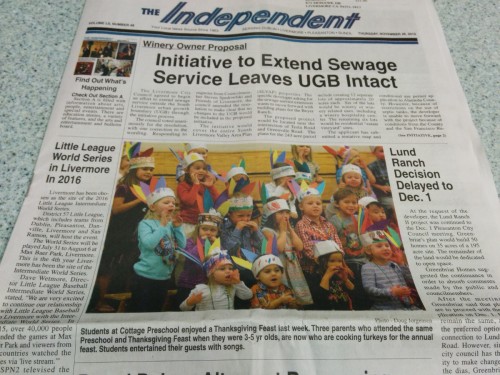 Once the feast was over we loaded up in the van and drove to Needles, CA for the night.  On Friday we loaded up and drove into Oatman, AZ to see the burros.  Heather was a little apprehensive, but it was still a good way to get out of the car and stretch for a bit.

From Oatman it was on to Flagstaff, AZ.  We grabbed dinner (at Chick-Fil-A) and then headed up to the Lowell Observatory.  They have public viewing and talks each evening.  We got to see the moon up close through their largest telescope and we saw Uranus as well (even with a building-mounted telescope it still only looks like a fuzzy blue dot).

We also listened to a talk about Pluto.  The Lowell Observatory is where Pluto was discovered.  In July of this year the New Horizons Probe completed it's 9.5 year journey to flyby Pluto and take the best pictures of it the world has ever seen.  Heather was actually somewhat interested in the talk, but she really wanted to interrupt every few minutes to ask unrelated questions or make statements.  They were always still space related though.  I had to threaten to leave if she didn't wait to ask her questions at the end.  She reluctantly agreed to do so.  Then she asked the presenter what hit Uranus to tip it sideways.

The next day we drove North to see Sunset Crater Volcano and Wupatki National Monuments.  Sunset Crater is one out of a string of dormant cinder cone volcanoes in Northern Arizona.  North of the volcano a ways is an old pueblo from the 1100's. 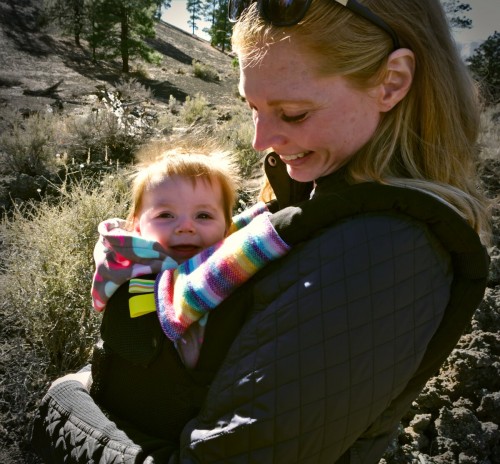 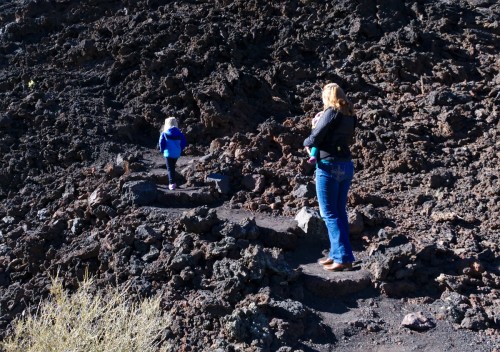 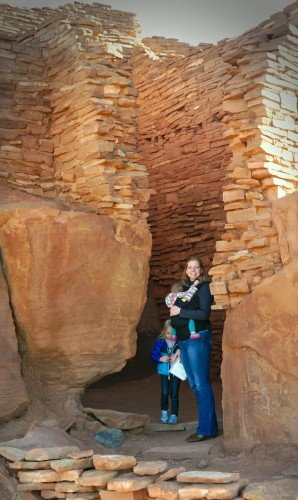 By the time we finished at the National Monuments and headed back out the East side of Flagstaff the sun was already setting.  We drove to Albuquerque, NM and stayed the night there and then drove straight on to Frisco, TX.  I had more stops planned, but by Albuquerque we were already almost a full day behind schedule, so we skipped the remaining stops.

We spent November 22 through November 29 in Frisco.  We went to the Zoo with Christopher & Jenny and kids on Wednesday, but mostly just hung out.

We did get Johnson Family pictures taken while we were there and one of just our little family as well: 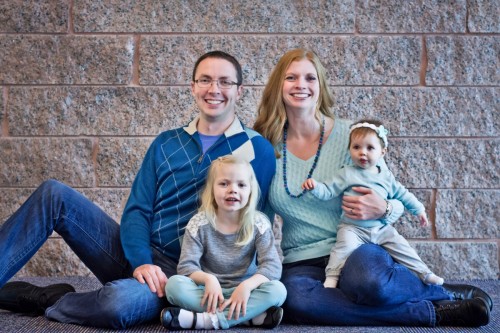 When our week in Frisco was up we began our long trip back home.  Weather looked clear so we opted for the Northern route up through Colorado and across Utah and Nevada.  We stayed the first night in Amarillo, TX and then angled up across the corner of New Mexico.  We passed by Capulin Volcano National Monument on the way.  We had to drive down a snow-covered road to get to it, but the park entrance had been plowed by the personnel running the monument.

Unfortunately, they hadn't plowed the road that runs up to and around the rim of the (dormant) volcano so we couldn't go up and have a look around. 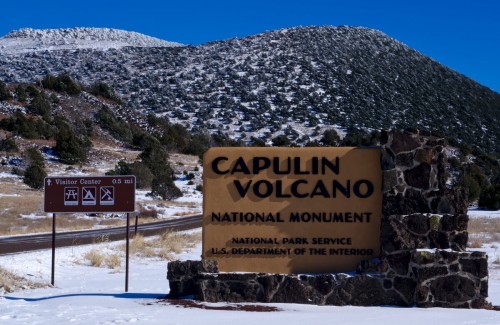 Our destination that evening was Christopher & Jenny's house in Colorado Springs, CO.  We stayed a couple of nights there and gave Heather the chance to play in snow.

We drove out the West side of Colorado and spent the night in Moab, UT.  The next morning we drove through the first third or so of Arches National Park before continuing on our way to Lehi, UT. 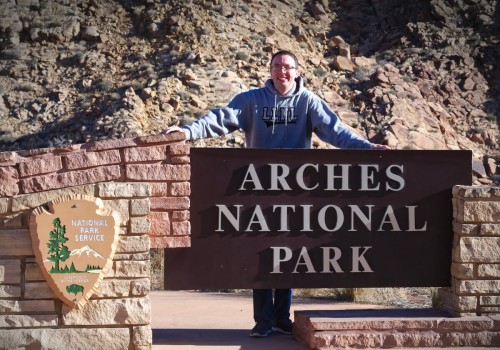 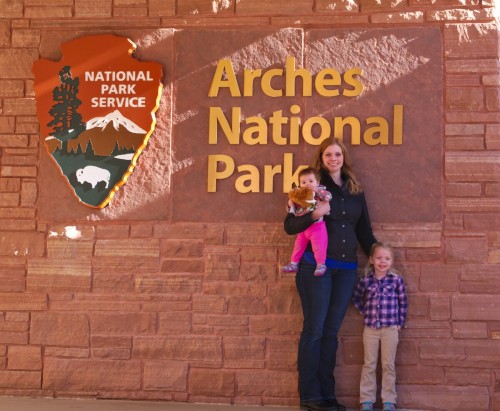 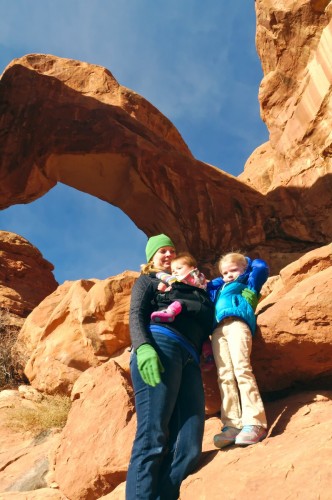 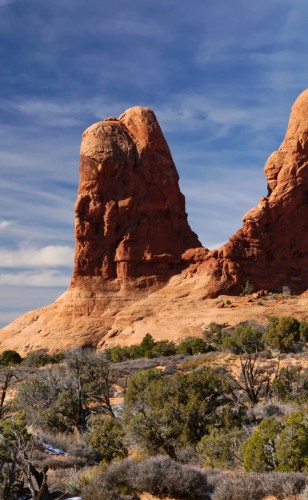 From Arches we drove up to Lehi, UT to spend a night at the house of some friends from college.  Then it was on to Winnemucca, NV and home the day after that.

It was a lot of driving which was made bearable by having the Raspberry Pi running Kodi and hooked in to the van's entertainment system.  We had movies and TV shows to watch to keep Heather occupied as we drove across hundreds of miles of nothingness.  I caught up on all my podcasts which could be played through the front speakers using Bluetooth while Heather watched stuff in the back with headphones.  I'm not sure how my family growing up survived driving across the country from Connecticut to Utah and back without such conveniences.

I've spent the last few months watching the BBC's 1973 mini-series titled, "The World at War" about World War II.  It's a fantastic study of the war.  It doesn't demonize the Axis; it doesn't revere the Allies.  It recognizes that the vast majority of participants were just everyday people trying to live their lives as best they could in unbearable circumstances.  It would be great to have a production of this quality done today with all of the information we know from after the fall of the Soviet Union and the declassification of many documents.

I bring this up because one of the important threads from WWII was the persecution of minority groups and how the general population was led from (often) having some underlying negative feelings towards these groups in general to willingly rounding them up and shipping them off to their slaughter.

With these lessons fresh in my mind some of the rhetoric I'm seeing in the news as it relates to Muslims is concerning.  Do I think the U.S. is on the verge of rounding up Muslims in to concentrations camps like we did U.S. citizens of Japanese descent during WWII?  Not today.  I hope not ever.

Nevertheless, rhetoric that riles up emotions of anger, mistrust, and fear will inevitably escalate to calls-to-action.  Fearful members of the public will lash out in their own simple-minded ways.  Activities like these people attempting to intimidate Muslims by standing outside their mosque with firearms and following around people who come and go will increase.  Without some calming influence I fear it's only a matter of time before one of these people murders a Muslim and believes they are "protecting America."

I am heartened, however, by the counter-protesters who are calling out this dangerous activity.  So long as counter-protesters keep showing up and are willing to defend those targeted by anger then I believe we can avoid national disgrace--and unmitigated bloodshed.

Last year, as part of obtaining a graduate certificate in national security affairs, I took a graduate course on the history of terrorism and counter-terrorism.  One thing Americans seem to be playing directly in to is one of the recruiting tactics used by Islam-based terrorist organizations.  The recruiting message is that the West is at war with Islam and that God (Allah) is calling them to fight.  Anything we do as a country and as a people that provides evidence that this is true amplifies their message.

We need to be the calming influence that prevents these events from spiraling out of control.  We need to show that we understand the difference between religion and violence that uses religion as an excuse.

Terrorism is a parasite that, throughout history, has infected one ideology after another.  The current ideology that it infects is extremist Islam.  It will eventually move on to find another host.  When it does, how are we going to view ourselves and how we handled it?

I don't claim to know what the appropriate response is, but I have some relevant observations.

I've known about the ban on using federal research money to study gun violence for a long time.  It's always been stupid.  If we want to make policy decisions based on anything but emotion then we need data.  Banning federal research money from being used to study one of today's most prominent policy debates it's absurd.  This is something everyone should support.  If you think more people having guns will reduce gun deaths then the data gathered in legitimate research should support you.  Maybe it's true, maybe it's not, currently we have very little data from which to draw any conclusions.

The Constitution is what "the people" want it to be.  Personally, I'm surprised that given the absolute refusal from the we-need-more-guns groups to enter into rational dialog on how to reduce gun deaths there isn't more call for simply repealing the 2nd Amendment and ending the "Constitution shredder" argument entirely.

Is anyone with a loud mouth actually trying to discuss and consider these questions?  Or has the public dialog been entirely reduced to "guns are the problem" -- "Nuh-uh, guns are the solution!"?