Heather has been asking to go camping for several weeks, but while I was still in class there was no way it was going to happen.  So once that wrapped up I decided to stop putting it off and pick a date.  So I took the afternoon off on Friday, and Heather and I packed up the car, and then sat in traffic... (Jess and Corinne stayed home.)

I wanted to get on the road by 1:00-1:30, but inevitably it took longer.  We were driving by 2:30 which I thought would still be alright, but no.  It was stop-and-go, bumper-to-bumper traffic from Livermore out the other side of Stockton.  That drive should normally take like 40 minutes, but it was over an hour and a half.  Then we had another hour of driving to do on top of that.  Heather fell asleep, which was good given the amount of sleep she was likely to get in the tent.

We drove out to Indian Grinding Rock State Historic Park.  I liked it when I was there last year--quiet, secluded, trees, and shade.  Presumably there are comparable locations closer to home, but I couldn't figure out how to find them.

We got to the campground, picked out a spot and got our stuff unpacked.  Then we wandered about looking at the bark houses and grinding rocks.  The high for the day was in the upper 90's and we probably should have rescheduled, but that's tough to do with a 3-year-old whose heart is set on the adventure.  Once it cooled down a bit we got our fire going and roasted our hotdogs for dinner. 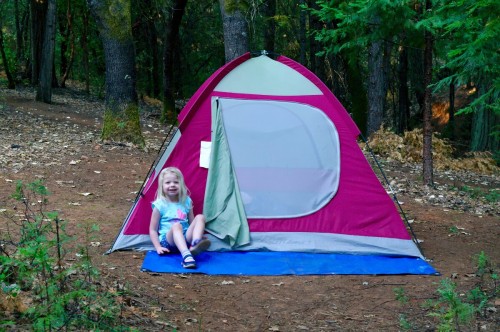 Once dinner was cleaned up it was time for s'mores.  I had neglected to put the chocolate bars in the cooler.  But it wasn't a total loss, I bought the "fun size" chocolate bars which are still salvageable after becoming bags of liquid chocolate.

After Heather was asleep I played with the camera for a bit.  Couldn't get any usable pictures of the stars, but I got this really fun picture of one of the neighboring campsites:

I really like the light hitting the trees.  And a picture of the fire: 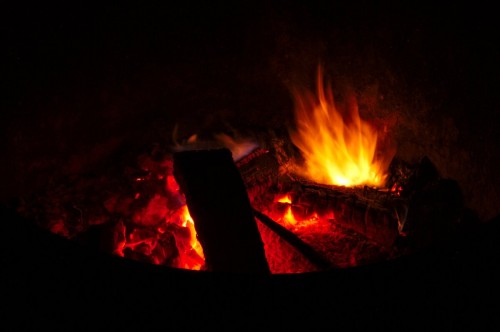 In the morning we had breakfast of Silly Circles (off-brand Fruit Loops) at like 5:30 AM since that's when Heather decided that it was too light out to sleep.  Then we went for a hike and back to the bark houses and grinding rocks while it was still cool and shady.  After that it was time to pack up and head home.

Heather fell asleep, but I woke her up for lunch at A&W.  She was excited to discover they have mini corndogs and milk, her favorite meal.  Then we stopped at the Ghirardelli chocolate outlet and ice-cream shop in Lathrop for an ice-cream sundae. 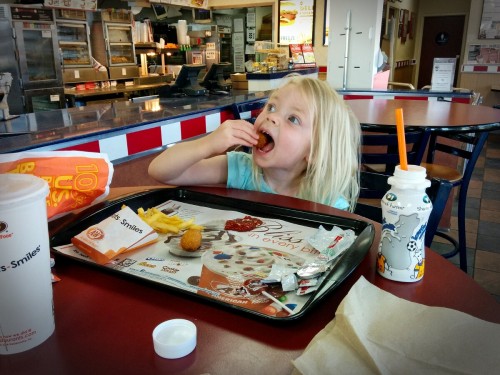 Heather declared it, "The best camping trip ever," so I guess it was a success.  I think we avoided sunburn and heatstroke with only mild sleep deprivation.

It occurred to me that I could set up the camera on the tripod to take pictures automatically so we'd have some pictures of the both of us camping.  Then I thought about turning them into a little video.  So enjoy the 4-minute abridged version of the trip with more music and less heat (sadly, I didn't take the camera with us hiking or to the historical sites).

If your browser doesn't want to play the video you can download it here: Camping June 12-13 2015 (small)

One thought on “Camping”