Last weekend we spent a few nights in a cabin in Calaveras Big Trees State Park.  We drove up on Thursday (Heather had no school on Friday) and stayed until Sunday.

Our confirmation email said to arrive by 5pm.  We pulled up about 4:45pm to find the entrance kiosk closed up and the park just about empty.  As we considered what to do next we saw a park employee locking up the visitor center so I quickly went over to her to see if she could help us.  She didn't have access to the kiosk where the cabin keys are kept, but stuck with us to help us out.

She went to check around the kiosk to see if the person who was supposed to still be there had left any information available and sent us to go look for the park ranger.  We never found the ranger, but ran across another employee closing up for the day who also joined our party.  He tried to raise the ranger on the radio without any success.  The girls danced about in the rain and we ate apple-cider donuts we had picked up on the way while both employees tried to come up with a good next step.

Diane, the first employee we had found, decided to take us up to the cabin to see if it had been left unlocked for us which would have been the standard procedure for late check-ins.

The cabin was not unlocked.

Diane's cell phone didn't get any signal out there, but mine had enough to make a spotty call.  So I let Diane use it to start calling numbers in her contact list to figure out who she could get to show up who would be able to get us in to the cabin.

While she did that we poked around the area.  Next to the cabin was a storage shed.  With nothing better to do I checked the door on the storage shed and found it unlocked.  It was full of firewood, repair materials, and cleaning supplies.  The cleaning supplies made me suspicious that it just might be possible there would be cabin keys around for whomever would do the cleaning.

Looking around on shelves, along wall studs, and behind electrical cords I hit the jackpot and found a ring of keys.  One labeled for each cabin--except ours.  But!  There was 1 unlabeled key!  Up the steps to the cabin door, key in the lock, and woohoo--the key turned--and we were in.

Diane apologized profusely throughout this process for the inconvenience (though accommodations was not her responsibility).

We brought in all of our stuff, turned the heat up, and then took off to town to grab a quick dinner.  I think it had been about an hour and a half from when we arrived until we managed to get in to the cabin.  There are 4 cabins together there that used to be used for rangers to live in (I believe).  They could use a little work, but they're decent overall.  Larger than we expected, big enough you could live an extended period of time there fairly comfortably.  It had 2 bedrooms (one with 2 twin beds, the other with a queen bed), a living area, a kitchen, a mudroom, and a bunch of closet space.

The next day we went back to the park entrance to get our actual key and saw Diane again.  We had been the talk of the park that morning when the employees arrived.  I got the impression that the employee who was supposed to be at the kiosk had left early without permission and was now in a fair bit of trouble for leaving us in the lurch.

Anyway, that's the end of the drama regarding accessing the cabin.  The ranger eventually stopped by to also apologize for our trouble and that he hadn't been available to help.

On Friday we drove down to the South Grove and hiked about a mile in before turning around to hike back out--without ever having reached any of the sequoias.  At the beginning the trail crossed over a creek and I stopped to take some pictures. 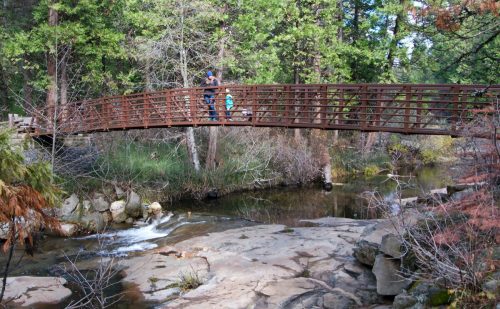 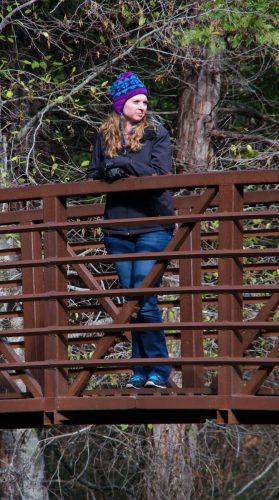 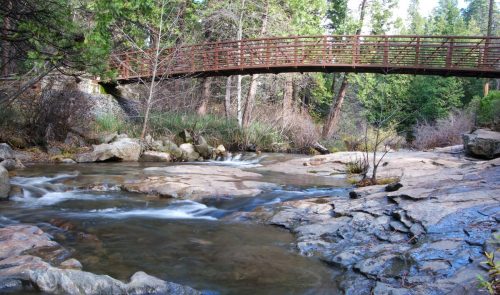 We cooked dinner in the cabin and then had a campfire for s'mores.

On Saturday we headed out to Moaning Cavern.  Heather does not like caves.  They make her very anxious.  Moaning Cavern involves climbing down 235 steps (and back up, of course).  Many of the steps are around this ~100-year-old spiral staircase: 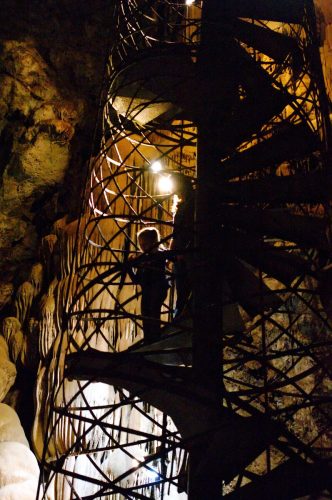 I carried Corinne all the way down and almost all the way back up.  After we finished climbing the spiral staircase she wanted to get down, so I let her climb up the remaining wood steps herself. 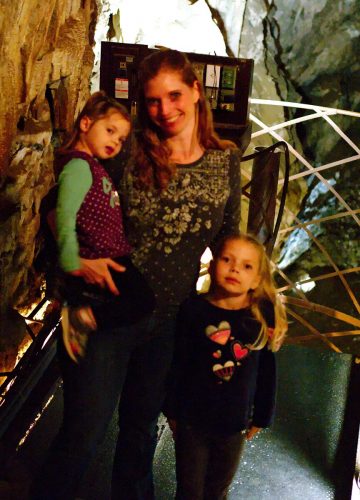 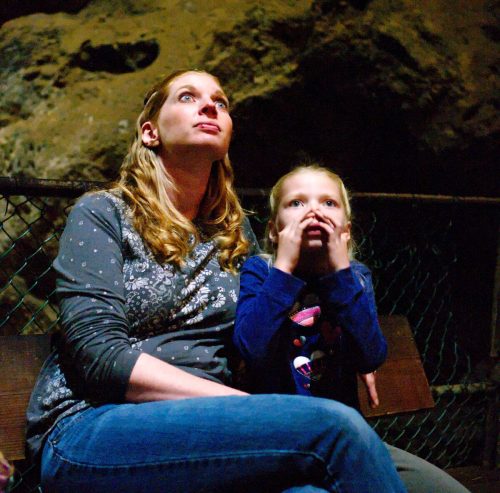 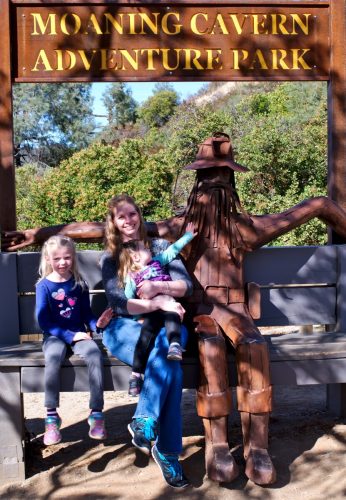 After the cavern we grabbed lunch at a local pizza place, which I thought was pretty good.  Then we headed off to find the Sutter Creek Ice Cream Emporium.  Along the way we ran across a glass-blowing shop with lots of neat, but very expensive art pieces.  We did not buy anything, but the girls enjoyed feeding the two chickens that live in the shop.  The dog took one look at us when we came in and wisely disappeared.

After dark that night I sent Heather out into the field with a flashlight to play with long shutter times on the camera: 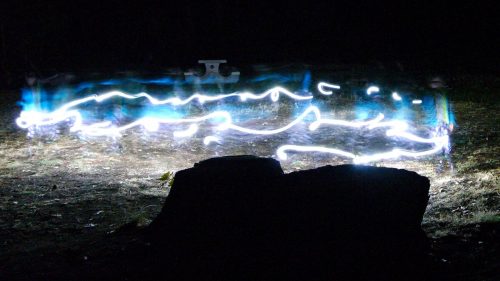 On Sunday we packed up and walked the North Grove trail to actually see some sequoias before heading home.

I enjoyed the quiet of the cabin (as quiet as you can get with the 2 nutters jabbering constantly anyway).  There's no TV, no Internet, no phone, and just about no people.  It was nice.

3 thoughts on “Cabin in the Woods”