Our friend Barry is the gun totin' type.  He made a bunch of targets and goes out shooting every so often.  He invited me to go with him on Saturday to do some shooting, but also to take some pictures and video.  We went with him and some others.  We drove out into the Central Valley to some Bureau of Land Management land where it's legal to shoot.  So it's pretty much a desolate set of hills and canyons which make nice backstops.

We set up a pistol and rifle course to run through.  I had not shot a pistol before this so I was fairly lousy with it, but I was a little better on the rifle.  Because of my lack of experience I did the course with a .22 pistol and a .22 rifle.  But later on I was able to fire an assault rifle, a .45 pistol, a 9mm pistol, and a .357 magnum revolver.  Those are pretty fun guns to shoot--the .357 really packs a punch.

Here are my favorite pictures and the video of my run through the course is at the end, you won't want to miss that, I'm sure.

We were out pretty much the whole day, we left town before sunrise and got back after sunset.  It was long and exhausting.  The high temperature out there was in the 97-99F range.  I did pretty well with the help of my Subway visor and my polarizing sunglasses, but by mid-afternoon I had a pounding headache behind my eyes.  I'm just not used to that much intense sunlight.

I also made a rookie mistake of taking ibuprofen (for said headache) on an empty stomach.  That made for a rather unpleasant experience of focusing on keeping my stomach calm while riding home, exacerbated by the fact that nausea is a symptom of severe dehydration and it wasn't immediately obvious whether it was the ibuprofen or if the 5L of water / Gatorade I drank wasn't enough to keep me hydrated.  But the nausea subsided half way home and I haven't experienced any additional issues, so I guess I'm alright.

And now the moment you've been waiting for: Kyle's run-n-gun, with the oh-so-manly .22 pistol and .22 rifle (which I managed to drop the magazine out of while swinging it off my back).  I don't think I did too badly having never fired a pistol until this day.  I did a lot better later after practicing and learning how to properly fire and suppress the instinct to compensate for kickback before the shot occurs (not that the .22 has much kickback, but those larger ones sure do).

These are the final chipmunk pictures I ended up with from the hundred or so I took during the campout we went on in July. 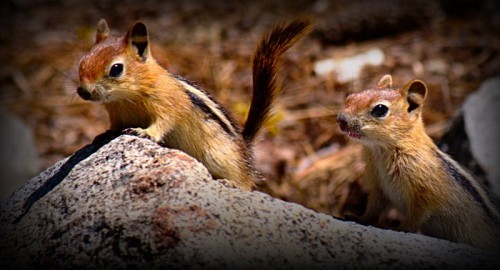 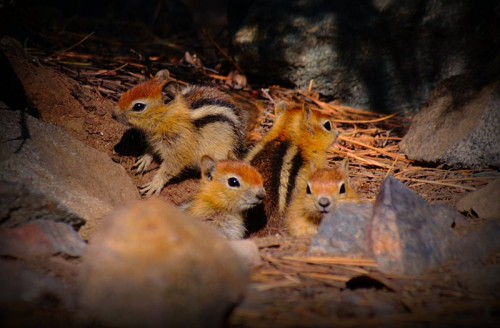 This is another post elicited from The Lucifer Effect by Philip Zimbardo.  First, a word about the book.  The first bit of the book is a walk-through of the events that occurred during the Stanford Prison Experiment.  He bases it off of the transcripts and recordings that were made and he keeps it accurate and scientific, but the transcripts of interactions between guards and prisoners is riddled with obscenities--just a word of warning to anyone planning to read it.  If that bothers you, you can just skip those chapters and move right into the discussion afterwards, but you may not fully appreciate the transformation of the participants.

This post comes from chapter 12, from a subsection entitled "Ten Lessons from the Milgram Studies: Creating Evil Traps for Good People" which begins on page 273.

Stanley Milgram ran a long series of experiments that involve participants believing that they are inducing increasingly powerful electro-shocks to another participant (a confederate acting the part of being shocked).  They do so under the guise of a memory-enhancement training program while being watched and ordered about by an official looking "scientist."  During the course of the experiment the participants must administer a shock each time the "learner" provides a wrong answer.  During the course of the experiment the confederate "learner" screams in pain, demands to be released (he's strapped down), complains about his heart hurting, and eventually stops responding (suggesting to the participant that the learner has become unconscious).

The participants almost always look to the "scientist" for guidance as things get bad, but the scientist always gives them reasons to continue with the experiment unless they simply get up and leave.  65% of participants followed the experiment all the way through the 30 levels of shocks.

Milgram ran this experiment over and over again all around the world making slight variations on the design to try and learn more about what factors contribute to participants' conformity.  It's really interesting.

I want to talk about the 10 methods of inducing compliance that are pulled from Milgram's experiments.  These techniques are used very successfully in myriad settings including: salespeople, cults, the military, governments, advertising, and others.  Each item has its own paragraph, so I'm going to summarize them briefly:

The last one is interesting.  Zimbardo elaborates discussing Erich Fromm's 1941 work Escape from Freedom.  In this work, Fromm discusses how throughout time the "greater good" used by dictators and tyrants in order to convince citizens to give up their freedoms is a promise of security.

I also can't help but read that list and think of how accurately it fits with how the TSA has operated since its creation.  Here's how I think the rules (except 2 and 5) easily apply to the TSA's behavior:

If you're so inclined you can probably turn these around and see how they are used against the TSA agents to convince them that further abuse of passenger's civil rights is acceptable.

It's incredibly effective.  Just think of what the national reaction would have been if, when the TSA was instituted, they had rolled out the body imaging scanners and said these are now required for all flights.  People would have flipped out.  Instead it was one slow addition to the rules after another until people just accepted the new scanners.  Those that did complain were told that their comments were appreciated and then nothing changed.  Now the TSA talks about how few complaints they get about the scanners / pat-downs (only several hundred per year!) which is a useless figure because it ignores the thousands of people who will no longer fly to avoid the issue (like myself).  As of July  2011, Amtrak has had 20 consecutive months of record numbers of passengers, but surely that has nothing to do with how awful and demeaning airports have become.

So, I've heard that when you're pregnant, you shouldn't wear heels because the hormones that relax your tendons and ligaments all over cause your joints to become less reliable. But I like my heels, and I have a hard time finding flats that I feel are dressy enough for church, so I've still been wearing them. Specifically, today I was wearing these. Now, for the record, these are apparently devil shoes. They were fine the first few times I wore them, but then they started giving me blisters on my toes. I've been determined to either break them in or toughen up my feet, though, so I wore them this morning. They have upped the stakes now, though, by bucking me off.

I twisted my ankle pretty badly. Just walking down the hallway from sacrament meeting to Sunday school, of course—nothing fancy. I even had my arm around Kyle's waist at the time (fortunately), which kept me from actually falling. Well, that and the wall. But I completely rolled my left ankle off that shoe (all 3" of it!), and it's not in fabulous shape now. I haven't hurt my ankles that badly since I was dancing!

Fortunately, like I said, Kyle was there, and my friend Sarah. And then my visiting teacher walked by and hailed her husband to assist Kyle in getting me to the foyer (while Kyle pulled the car around) and then to the car. I iced it for a few hours after we got home, and the pain is a lot better. It's not very swollen, either, which is great. So hopefully I'll be able to walk normally again in a few days? Sarah says I can't wear heels anymore, though.

I don't remember where I heard about it originally, but I've had the book The Lucifer Effect: Understanding How Good People Turn Evil (by Philip Zimbardo) on my wishlist for a little while.  Yesterday I was able to pick it up at the library and I'm reading it now.  I have a feeling there may be several blog posts that come out of this book.

The author is the creator of the infamous 1971 Stanford Prison Experiment (wherein students were randomly assigned as prisoners or guards and during which things went terribly wrong).  So he has a long and varied history of studying human behavior.

I'm only on page 11 but he already describes something that is all too apropos:

When a power elite wants to destroy an enemy nation, it turns to propaganda experts to fashion a program of hate.  What does it take for the citizens of one society to hate the citizens of another society to the degree that they want to segregate them, torment them, even kill them?  It requires a "hostile imagination," a psychological construction embedded deeply in their minds by propaganda that transforms those others into "The Enemy."  That image is a soldier's most powerful motive, one that loads his rifle with ammunition of hate and fear.  The image of a dreaded enemy threatening one's personal well-being and the society's national security emboldens mothers and fathers to send sons to war and empowers governments to rearrange priorities to turn plowshares into swords of destruction.

It is all done with words and images.  To modify an old adage: Sticks and stones may break your bones, but names can sometimes kill you.  The process begins with creating stereotyped conceptions of the other, dehumanized perceptions of the other, the other as worthless, the other as all-powerful, the other as demonic, the other as an abstract monster, the other as a fundamental threat to our cherished values and beliefs.  With public fear notched up and the enemy threat imminent, reasonable people act irrationally, independent people act in mindless conformity, and peaceful people act as warriors.  Dramatic visual images of the enemy on posters, television, magazine covers, movies, and the Internet imprint on the recesses of the limbic system, the primitive brain, with the powerful emotions of fear and hate. [The Lucifer Effect p11 - emphasis mine]

I read that and I can't help but think of what's happened in our country since 2001.  How much blind hatred has been stirred up against an entire people because of the actions of a few?  How many ways have we willingly allowed the feelings of fear, suspicion, and vulnerability be used as reason to change our society without factual basis?

It certainly has happened and is happening against anyone with a Middle-Eastern skin tone or practicing Islam.  But it's also spilling over into the rest of our societal interactions as well.  Has this not been the exact effect we've been seeing in political debates?  It's always how the "other side" is trying to destroy everything we hold near and dear.  Political ads are designed to instill fear and anger about what the "other side" is doing.  Carefully designed to get you to react emotionally rather than intellectually.  Because an intellectual position can be discussed and reconsidered; attempting to discuss an emotional position makes you "one of them."

As a society we're being pitted against each other.  It bothers me how much outright propaganda we allow because even when you know it to be nonsense and predatory it still achieves its goal of creating a new baseline of emotion.  A new baseline of suspicion, fear, and anger.  And making those emotions normal is only going to lead to trouble.