Kyle and I finished off the last of our wedding M&M's on Wednesday. We've just kept refilling the smallest of our kitchen canisters and eating them. (I suppose now we'll have to put in rice or something equally boring. Less tasty.) 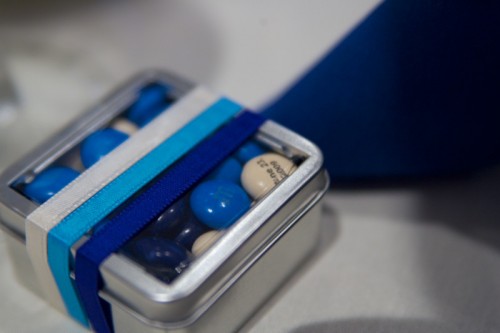 You can see in the picture that some of them said "June 23, 2009," but some also said "Kyle & Jess." We had them special ordered to give away at the receptions, and Kyle's mom and sisters put them into those super cute tins and tied the ribbons on them (which I bet was way fun). There were TONS, 'cuz we originally ordered 15 pounds (5 pounds cream, 5 pounds blue, and 5 pounds mixed with the printing on them (because it is ridiculously and outrageously more expensive than just getting a custom color!)). But then they sent us the wrong color of blue, so by the time they sent us another bag of blue, we had 20 pounds of Om-Noms! We just mixed them all together and it was grand. But there was a lot.

And Tianna just told me she may still have some. We're thinking about ordering more each year on our anniversary. They're just such fun!