This evening I was cleaning raw chicken so we could bag it and freeze it. When I was done I went to throw away the remnants and to my surprise found a suspiciously new-looking laptop, slightly busted up and sitting in the dumpster on top of everything else: 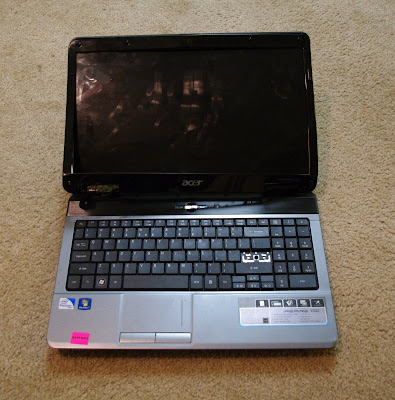 The protective plastic on the top of the lid was still adhered, and it has fairly decent specs with a "Windows 7" sticker. It doesn't look worn, just busted. The little pink sticker on it has the date 3-21-10, the words "Best Buy", and the number 134 (the enhanced image of the sticker is on the left): 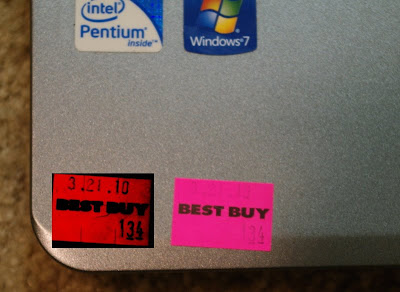 It just so happens that the closest Best Buy, in Dublin, is store number 134. Seems to me that someone stole a display model laptop, managed to bust it up, and decided to throw it out (which is illegal in and of itself due to the e-recycling laws). The thief destroyed the screen, but was apparently not smart enough to take out the RAM, or hard drive, or DVD drive, or battery and try to sell them.

I called the police department and reported it. They were supposed to be sending an officer by to pick it up sometime this evening, but it's 10:00 now and I don't think they're coming (** Update: The officer came by and picked it up, and it was the same officer Jess did a ride-along with for her training. **). It looks like this model is currently retailing for about $500. Jess won't let me mess with it anymore (after looking to see if the RAM and hard drive were there), but maybe the person was also stupid enough to take some pictures of themselves with the integrated webcam before breaking it.