On Saturday we slept in, of course.  But the Inn at Occidental is prepared for this and serves breakfast until 10.  The entree for the day was Pecan Caramel French Toast, very tasty.  After breakfast we headed out to the Armstrong Redwoods State Natural Reserve.  It was, as you might expect, a bunch of trees.  But they are, you know, big....and tall....and old.

We only did a fairly short "hike" (let's be honest, it was walking along an almost completely flat and cleared path).  It started with a stop at a labeled cross-section of a tree which lived from ~948 until ~1906: 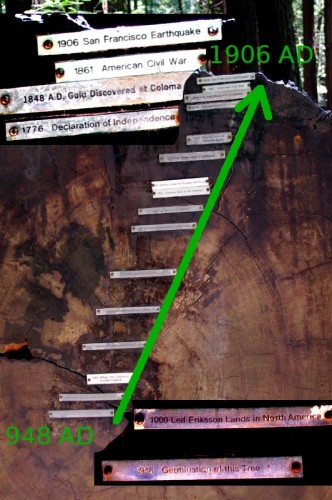 Along the way the path goes through the Burbank Circle.  Apparently, when a redwood is damaged, or dies, offshoots from its roots/stump grow.  This naturally creates a circle of trees around the base of the dead one.  Eventually the dead one decomposes away and leaves a clearing within a circle of trees.  There's enough time for this to happen since the trees live to be 1000 years old.  So, we rested on the benches in the Burbank Circle.  Here's a picture looking up from the center of the circle (it looks more circular if you're really there looking around): 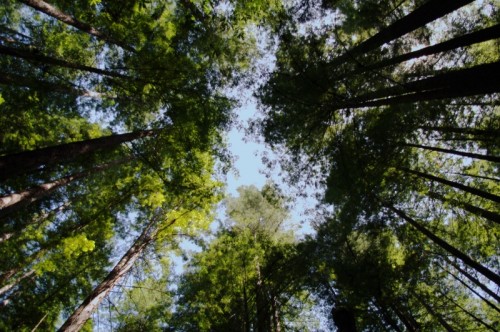 A very large amount of the ground in the woods is covered in redwood sorrell (not to be confused with clover).  If it gets too warm (like when the sun is hitting it directly) it folds up.  This spot was in the shade so the leaves (I guess they're leaves?) are spread apart. 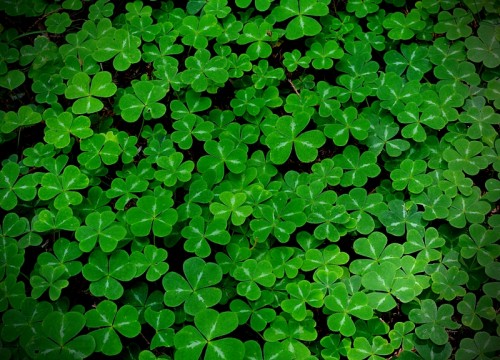 Here's the two of us standing against the cross-section of a fallen redwood.  They're big trees. 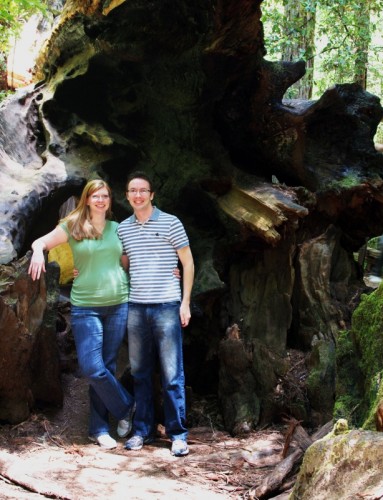 As we were heading back along the trail to the parking lot we spotted a banana slug on a post.  They're silly-looking things:

One of the things I like to do with our camera is to take either really quick exposures or really long exposures because you get to see things in a way you can't with your eyes.  Here's 15 seconds of walking through the woods: 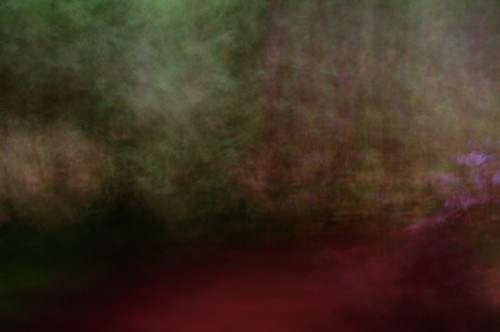 There's something kind of interesting and ethereal about it.
We like the redwood forest.  It was quiet and shady.  It'd be really fun to go camping up there sometime.  Once we finished up we headed into Sebastapol.  We stopped for pizza at Mary's Pizza Shack, which was pretty good.  The food was needed and Jess needed some time to recover from her first bout with car-sickness.  The roads were a bit windy and up-and-downy.
After lunch it was on to see the Sonoma Horticultural Gardens and Nursery.  We concluded that they would now be better named the Horticultural Gardens of Doom.  So stay tuned.
Up Next: Part 3 - The Horticultural Gardens of Doom, Part 4 - The Ocean