Skip to content
This is how you can tell Heather's doing well: fists up by her face, legs relaxed. She's just chillin'. 😀 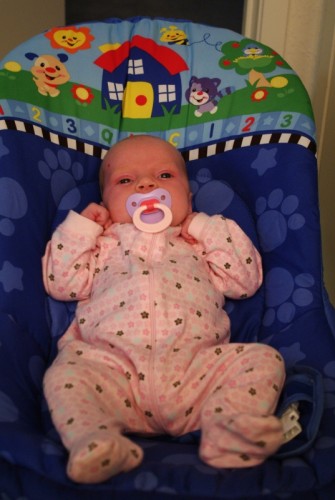 I cross stitched a birth sampler for Heather, but of course couldn't finish it until after she was born. It is now hanging in the nursery, though: 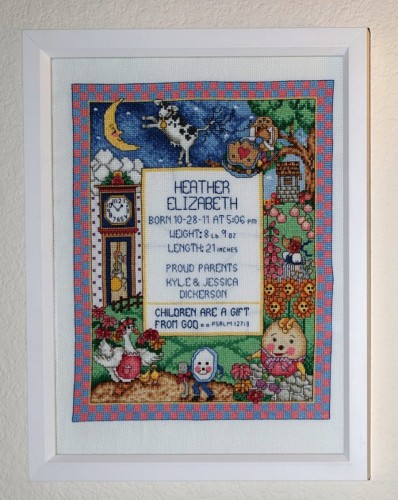 This is something else I did. My mom made it and it hung in my room as a child, but the fabric had become really discolored over the years. So I re-stitched it and gave the wood a fresh coat of paint: 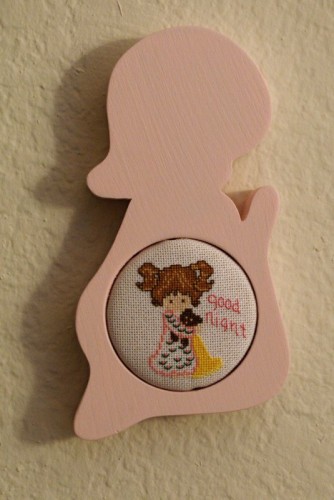 Lastly, here's a picture I took of Heather this morning: 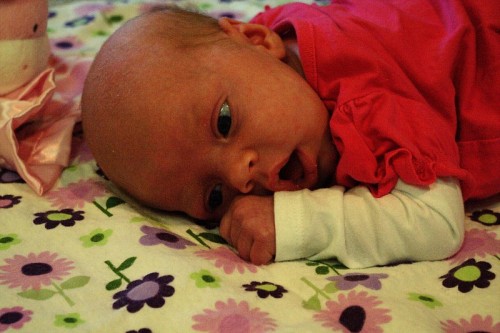 I was going to include this in my post earlier, but it wouldn't work. I don't have any new pics of Heather, but Kyle took this video of her this afternoon. It's nothing too exciting—just Heather being Heather.

Heather is one month old today. We "celebrated" by reading to her for the first time—Sometimes It's Turkey, Sometimes It's Feathers; Babes of the Wild; and Stanley & Rhoda. She actually did seem to enjoy it; at least, she sat quietly on my lap while I read to her.

Heather is doing well. I feel like things are starting to settle down a bit; we don't have anything like a reliable routine or schedule yet, but things are gradually becoming more predictable. Like, if she's awake, she's going to want to eat every 2 hours. And at night, she'll usually go down for a long stretch (4-6 hours) between 6 and 8pm, then sleep in 2- to 3-hour increments until morning. Her feedings are going much more smoothly these days (day and night), and she's getting easier, overall, to get back down at night. She still doesn't love sleeping during the day, but she'll at least sleep for short naps (30 minutes to an hour) a couple times a day (only in her bouncer, or the car, or on a walk or something, though; she hates her crib during the day).
She really isn't too fussy overall. She is impatient, though—most of her actual screaming is done between the time she wakes up and the time I actually start feeding her. (Less when her dad gets her up; she likes him better than me.) Other than that, she fusses when she's gassy (which happens frequently, unfortunately, but I think it's improving). We're accumulating a small list of things that work (most of the time) to calm her down. In no particular order:
I keep meaning to try a bath, but I'm scared because she did scream through that once (it was time to eat, and like I said, she can be impatient). She really enjoys her baths in general, though, so I'll have to give it a whirl sometime.
Kyle is back at work now (he started back last week, but only Monday and Tuesday, and he spent the afternoons working from home). It's been a pretty smooth day, though. When she wakes up, I'm going to feed her and then go for a walk that may take me by Dairy Queen to celebrate a successful first day alone with the drgn. Who knows. 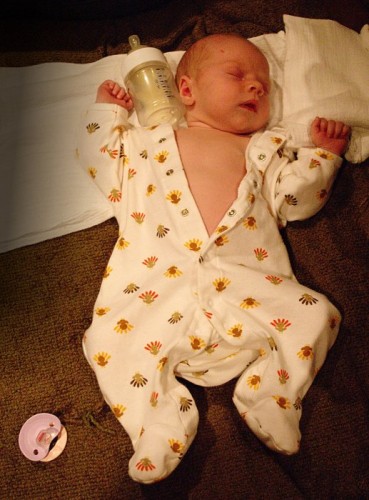 Possibly my favorite picture from Thanksgiving.