I submitted a picture from our trip to the San Diego Zoo to the Intermediate Pictorial category of our camera club this week. This year there have been a lot of good photographers in the intermediate group. Some months I disagree with the judge and the pictures that place. However, as we were going through the images this week I was thinking there were many very good pictures and that I wouldn't feel grumpy about them being placed over mine. When my picture was shown the judge didn't have any critiques about it, but also moved along fairly quickly without much comment. So I was actually quite surprised, and very flattered, when it was awarded first place.

I do rather like the photo. But I don't claim to be able to find and take shots like this with any regularity. Of the 328 pictures I took at the zoo this is the only one that I still really liked after I worked with it. So I'd like to show a few of the steps this image took before the finished product.

Top-left: The original image as it came off the camera.
Top-right: The first step was to take out the extra blue. Your eye is very good at making you think the color balance is OK, but when you see the image with the blue removed it looks much better. The only thing done between the original and this image is the removal of the extra blue.
Bottom: Then I cropped in on the face and bumped up the contrast a little, the saturation a little, and removed some distracting blobs in the background. 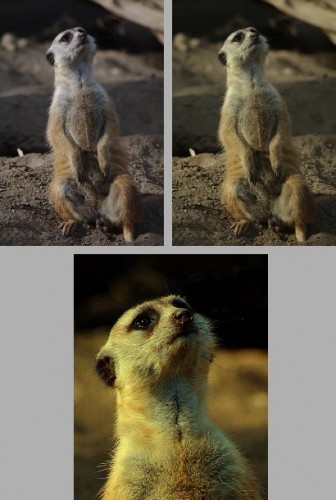 The final step was to add some selective darkening to tone down overly bright areas and help the eye stay focused on the face. Here is the final image: 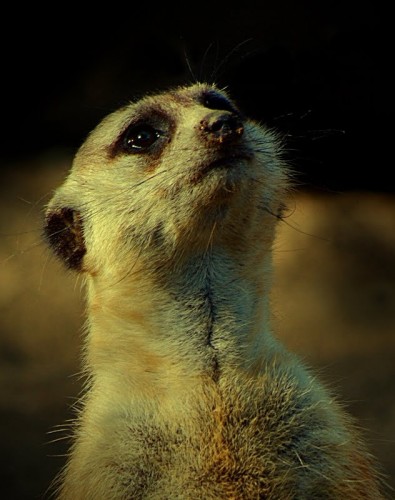