I have a habit of making up little songs that I sing to Heather.  They're not impressive in any way, but she likes them (usually).  The most often criticism I get from her is to "make them more rock-starry."  I don't really know where she got the concept, but she then is happy if I give the song a more rock-and-roll style.

Because of her regular insistence on my songs being more "rock-starry," on Saturday I told her I was going to put on a song for her that I thought she'd like.  I told her it was a song I associate with Grandpa (her Grandpa, my Dad) playing on Saturday mornings for some reason.

Dickerson kids should now make a guess about the song, we'll see if we developed a similar association.

I played "I'm gonna be (500 miles)" by The Proclaimers and she thinks it's awesome.  We listened to it a few times and she can sing along with some parts.  During the chorus she got her stroller and would strut around in circles pushing it along.

Now for something completely different.

One of the kids from Heather's preschool class had a birthday party this week.  It was Monday evening and Corinne was going to need to be going to sleep, so I took Heather to the party.  It was at a party place in town that has a room with big inflatable play structures and a rock-climbing wall and some other rooms for eating and such.  We arrived and I told Heather she should find the birthday girl and say, "Hello" and wish her happy birthday.  But Heather didn't want to leave my side.

She was a little overwhelmed by the noise of the fans on the inflatable things and by the number of adults milling about.  So we walked around the room getting a feel for the place and she started to relax.  I asked her if she recognized the kids.  She said they were the kids from preschool (with that tone of voice that says, "obviously").  I asked her if she could tell me their names.  So she started rattling off the names of the kids in her class.  I interrupted her and asked if she could tell me who particular kids were, "Who's this girl who came over and said 'hi'?"  But she didn't know.  We did this a few more times and she didn't seem to know the names of any of the girls.  Then a couple of boys ran by and she did know their names.

At school they do a game where they say a kid's name and toss them a ball.  When they do this they're all wearing name tags.  Heather has no problem with names during this game.

We think she's reading the name tags (probably not completely, but recognizing enough letters to then pick the right name from her memorized list) during the game. 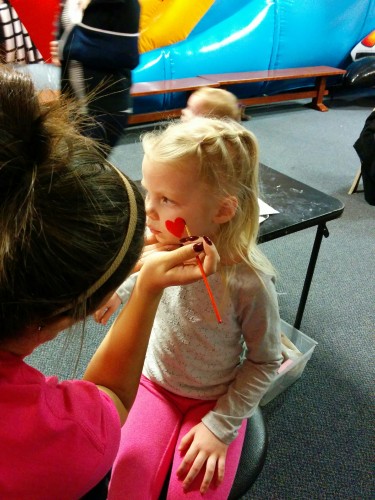 I think she must have the same issue that I have with recognizing faces.  I can learn to recognize a face, but it seems to be harder for me than it is for other people.  Especially if I run across someone outside of the usual context--it can be incredibly hard.  Often times I will be able to recognize that I know the person, but have no idea how or why or who they are.  Heather seems to be the same way.  At the party she definitely recognized the kids, but couldn't connect them with their name, but she knew all their names.

I find it really interesting.  It took a long time for me to realize that I took a lot longer to learn names and faces of people.  I don't think it was until I was in college that I really figured it out.  Which probably has something to do with growing up in a town where the entire grade was the same ~100 kids from kindergarten through graduation.  I would have learned all the kids eventually and then they didn't change much.  Whereas in college there was little consistency.

Taking her to that party and watching her in a full-blown social situation where I don't know anybody and can't really help things along made me realize how much of my personality she has.  Jess says she sees a lot of her own (Jess') personality in Heather as well.

We know she does play with other kids in a very normal way, but we also, at times, see her play less with the other kids and more in-the-vicinity-of the other kids a lot too.  And she will, not-uncommonly, just go off by herself to play. 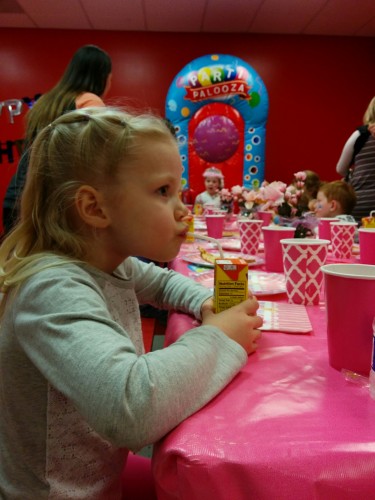 At the party, when it was time to sit down and eat, she went in and carefully sat at the corner seat furthest from where the other kids were already sitting.  The table then filled in around her.  During the time they were all sitting at the table she only lightly interacted with any of the kids.  I recognized that I was displaying the exact same behavior.  I didn't really interact with any of the other parents.  I tried to stay to the outside of the room so that Heather would be more likely to interact with the other kids and less likely to just interact with me, but I suppose I wasn't being a good example of pro-social behavior.  At one point she wanted to tell me knock-knock jokes. I redirected her to tell them to the other kids at the table which she did just fine.  She wasn't unhappy at all--just not really interested in the other kids.

This makes me feel a little torn.  I fully recognize the benefit of developing the ability to have smooth social interactions, but I also recognize that it probably doesn't bother her (in the same way that it didn't bother me at all that I wasn't interacting with the other parents at the party).

In some ways its feeling like I've acquired all this understanding about the world and now have to decide would I have done anything different in my own life growing up that I should now encourage Heather to do.