I've really been debating writing this post.  We're excited about our new van, but I dislike posts that come across as bragging.  So, I don't intend for this post to sound braggy.  We're just excited and we hope you can be excited for/with us.  [If you don't want to read the boring details, a picture gallery is at the bottom.] 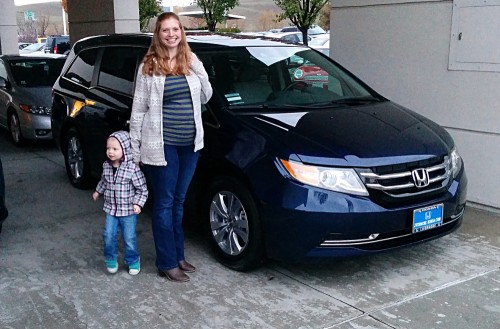 As all non-trivial purchases around here do, this one started with research.  With the expectation that long road trips are likely in our future and a second child imminent we decided to go the minivan route.  Overall they're safer, more versatile, and more fuel-efficient than SUVs.

With that decision made, our first stop was Consumer Reports.  The 2015 Honda Odyssey EX-L is currently their top-rated minivan.  We stopped by the local dealer a couple of times to poke around the model they had in the showroom.  With my semester finally over (NSLP class on terrorism) and some major deadlines at work completed we decided it was time to move forward with our plans to purchase.

On the Friday after Thanksgiving we stopped by the dealer to do a test drive.  It went fine, but I really didn't think that Thanksgiving weekend is a big car-buying weekend.  It is.  So that could have been planned better.  With the test drive done we were sure the Honda Odyssey was the vehicle we wanted to buy.  Now the hard part.

I dislike the idea of haggling over prices.  I just want you to tell me for how much you're willing to sell and I'll decide if I want to buy at that price.  Luckily I had an email sitting in my inbox from Consumer Reports about their partnership with TrueCar.com.  TrueCar is a service that lets you configure a vehicle and then ask for quotes from nearby participating dealers.  TrueCar tracks purchase prices and gives you statistics on what prices people are paying for the car.  They also provide invoice prices and the MSRP.  This gives you a good idea of what price you can expect to get and what constitutes a good deal.  The entire process involves no commitments.

The main benefit seems to be that TrueCar-participating dealers make a commitment to not jerk you around once you get to the showroom.  Our local Honda Dealer, Livermore Honda, has a pretty good reputation for treating customers well so I was pleased to see the lowest offer come from them.  If TrueCar's information is to be believed then we paid about $500 below the factory invoice price--about $3,700 below MSRP.  And we were able to do it from the computer without haggling with anyone.  It was lovely.

Once the dealer commits to a price they call you to talk details.  As it turned out the dealer was willing to sell us a matching vehicle at the quoted price, but they didn't actually have one on the lot (none at all for the trim level we wanted regardless of color).  They would need to make a trade with another dealer to get it, but (since that's a cost to them) they won't do it until we're in the dealership actually making the purchase.  Not a big deal.  The transfer and delivery adds $200 to the price, also not a big deal--still well below the other offers we saw on TrueCar and still below factory invoice.

So we went in on Monday after work.  We talked to the Internet Sales Manager who was working and he started calling around looking for a matching vehicle.  This is the part that exposes why car dealerships have bad reputations in general.  Livermore Honda sells their vehicles without modification.  If you want accessories then you can buy them, but they don't pre-install them.  Many dealers pre-install accessories and then charge you for them or charge you to remove them.  It's incredibly sleazy.

Since we were looking for a specific vehicle in a specific color we had to look for one with the least amount of junk added on from one of these other dealers.  Since making a trade is work, the other dealer isn't interested in negotiating the accessories.  And since our dealer has to pay for the accessories either way they're not really interested in eating the cost.  Fair enough from our dealer's perspective.  If I were a haggler I suppose I could have tried to convince them to eat the cost in order to make the sale.  But I already knew the price I was getting was a good-to-great price and since they'd been fair and transparent with me about the whole process I felt it was fair to treat them the same way.

After a few calls we found one that only had the stupid wheel locks installed.  The other dealer invoiced the wheel locks at $149 for being pre-installed, but our dealer wasn't trying to make additional money off the wheel locks that we didn't want anyway and told us the price increase would only be $99.  This was another point in favor of Livermore Honda.  You may be thinking, "Yah, but you still ended up spending $99 you didn't have to."  And you're right.  But we decided it was worth it to get the exact van we wanted with the color we wanted instead of settling for something else.  If I had a regret about my Civic it'd be that I didn't get it in the color I wanted--I got it in the color they had available.

Anyway.  The salesman was helpful and transparent about the entire process and never once attempted to sell us anything.

With the dealer trade arranged it was time to fill out paperwork.  We decided to finance the full price at the 0.9% APR Honda is offering and keep our money in the bank.  The total interest on the loan will be a little over $500.  I expect interest rates to start ticking up over the next few years and if that happens then we'll likely end up earning more interest on the money we're keeping in the bank than we'll pay on the loan.

Aside: The new "Truth in Lending" forms they have to use are really nice.  They clearly and unambiguously state the principal being loaned, the interest rate, the total interest charge over the life of the loan, and the monthly payment.  It makes it impossible to trick someone into something.  And I believe it has a fraud clause that if the information is incorrect then the contract is nullified.

This is always the worst part of buying a car.  The salesperson didn't try to sell us anything, but for some reason the finance person always does.  I suppose it has to do with the psychology of having gotten this far and sitting in a little office instead of out in the open.  However, the only things she tried to sell us were a service contract and an extended warranty (unlike the finance guy when I bought my Civic who tried to hard-sell us 4 or 5 things).

The most frustrating aspect to me is how the pitch they use is always in almost direct contradiction to what the salesperson would tell you (and usually what actual data says too).  The Civic guy used a line about how Civics are always being stolen to push some secondary insurance scheme (a complete mis-statement that I addressed in a previous blog post about Bayesian reasoning).

This finance person tried to tell me about how these new cars are full of so many electronics (true) and that they'll basically fail all the time because it isn't an "exact science."  Seriously?  Electronics aren't an exact science?  If electronics aren't an exact science then I'm not sure anything really is.  The only real question is, "To what level of quality did they build and install the parts?" If I were concerned that this vehicle were going to start falling apart the minute I drove it off the lot I wouldn't be buying it in the first place.  So which is it: Hondas are reliable, well-built vehicles or their electronic systems are shoddy and fail at the drop of a hat?  I'll make my decisions based on data rather than fear, thanks.  And the Consumer Reports data is that even the electronics are reliable.

Anyway, after turning her down a couple times she moved on and we signed all the paperwork.  No little fees tucked away.  The agreed-upon price from TrueCar plus the $200 transportation / dealer-trade fee plus the $99 wheel locks.

Of course, the vehicle wasn't actually there, it was in Merced.  So the next day they sent their driver off with the trade vehicle to pick up our van and bring it back.  They got it, cleaned it off and dried it (it had been raining all day) and did all the delivery prep work and called us to let us know it was ready.

After work on Tuesday we drove over to pick it up.  The salesperson walked us through most of the various features and then Jess drove it home while Heather and I rode in the Civic.

After we got Heather to bed we went out to the garage to play with it, customize the displays, get our phones paired to it, clone the garage door opener into the built-in system, mess with the controls, etc.

I actually hadn't even driven it yet until today when I backed it out of the garage into the driveway to take some pictures.

We decided that if we're going to buy a van to keep for the next 10-15+ years we should get something a little nicer.  This is probably the closest thing to a luxury vehicle we will ever own.

And now, the only part, if any, I'm sure most of you care about: