Kyle and I went to Frisco, TX to see my family for Thanksgiving. We flew out Tuesday evening (our flight was delayed for mechanical problems, so we got in VERY late) and came back early Saturday morning. We would have liked to stay longer, but it would have cost big bucks to stretch it any longer. Insane. But we really enjoyed our quick trip anyway.

Part of the reason it was such a priority to get out there was that Chance, Rachael, and Maddox hadn't yet gotten to meet Kyle! But they all finally got to meet, which was good. It took Maddox a while to warm up to Kyle, but by the time we left, he had acknowledged him as a human being. Sometimes with a name! "Uncle Kyled," he calls him. Here's Chance and Rachael: 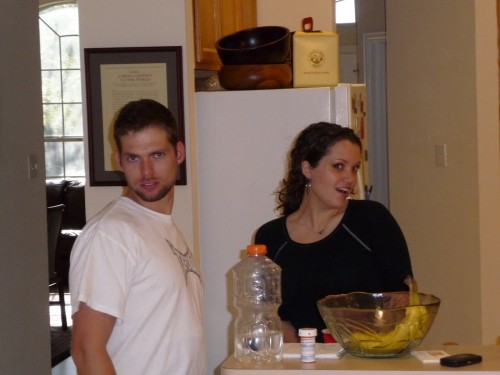 We spent Wednesday just hanging around the house, mostly. We played Mario Kart and Guitar Hero with Colton (who actually beat Kyle pretty bad at GH!). 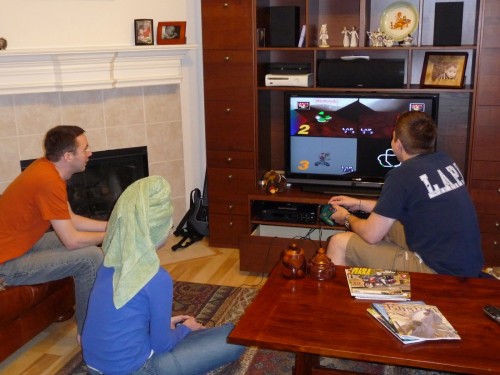 Chance, Rachael, and Maddox came over and I got to play with him and try to remind him that he already knew me, so he didn't really need to be afraid of me. The process was significantly sped up by playing with old McDonald's chicken nuggets toys. Also reading video game manuals. Basically, we all goofed around most of the day. It was lovely. 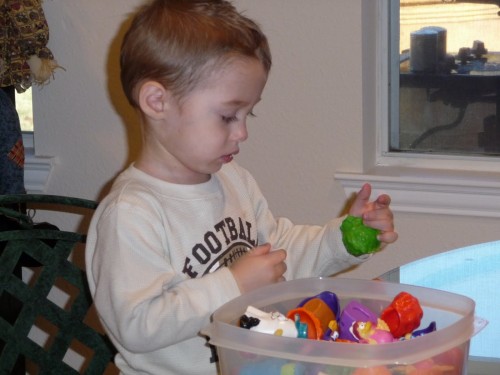 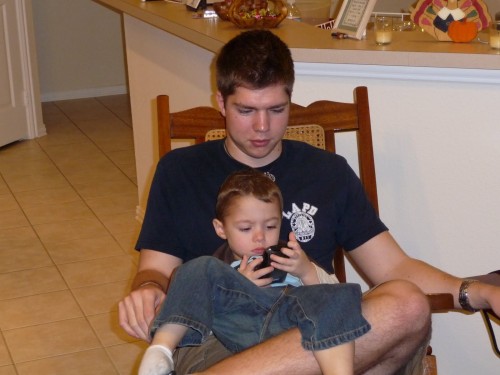 On Thanksgiving morning, Chance, Colton, Cameron, and Dad went to the ward Turkey Bowl, but Kyle chickened out on the grounds that he hadn't brought anything warm enough to play football in that early in the morning. We were already up at this point, though, so I dragged him into the office and made him watch while I rediscovered a bunch of my favorite childhood books. This was definitely a highlight of the trip.

Later on, everybody came back and we got ready for dinner. Mom and Dad had invited Shelley and Robbin Holley to join us, so they came over, too, which is always fun. Dad barbecued the turkey, and we had all the classic sides, just like I like (though Mom says every year that we need new stuff, 'cuz it's boring...blah blah blah). And delicious pies for dessert! We played cards and Scattergories later on, and talked all afternoon. It was a great time, and I'm so glad we were there. Here's a couple of random pictures from that day: 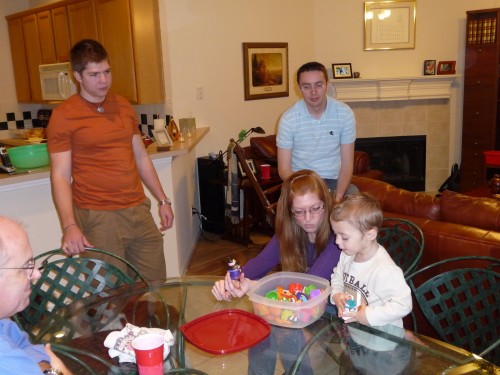 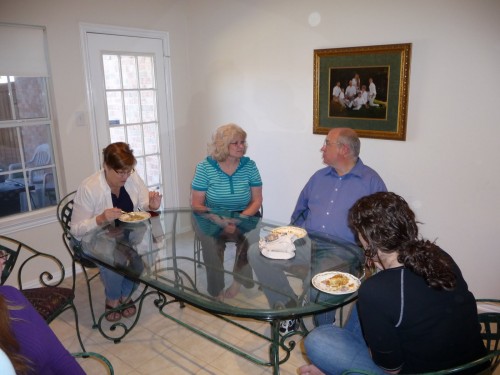 Friday was our last day in Frisco, and again, we didn't do a whole lot. (Actually, all this time, Kyle was doing quite a bit of work on the registry website, but I'm sure he'll post about that some time far more intelligently than I could, so I'll leave it at that.) I took one of my completed cross stitch projects with me so that Mom could "help" me make it into a bell pull. See, I know how to cross stitch, but I can't really sew. Plus, I don't have a sewing machine. But Mom does, and she's a genius! And a benevolent one at that. So she agreed to "assist" me with this (I'd like to avoid having every single one of my cross stitches get framed so they all look exactly the same, y'know? And since this one is actually designed to be made into a bell pull, it seemed ideal for doing something else with.) Anyway, she made it into this:

And isn't it great? Now I just need to find some kind of hanging hardware (which is being slightly more difficult than I thought it would be). I'll probably end up getting a dowel rod and finials and staining them; I just don't want to stain them. Call me lazy.

Anyway, we all went out for dinner Friday night at the restaurant I used to work at, which was slightly odd just because I have all these vivid memories of working there, but it's been ten years, so nobody remembers me at all. Which is fine. Just slightly odd.

And then it was before the crack of dawn Saturday and time to go. It was so good to see and get to talk to everybody! I miss you guys.

One thought on “Thanksgiving!”