I have a couple theories about why I am still sick. What say you?

In good news, I think the cold is improving, if very slowly. And my eye is definitely getting better—antibiotics are a miracle, and I love Kaiser.

My new birth certificate arrived today! That was completely unexpected—I assumed it would be weeks at least. But it's here. I am once more valid. Huzzay!

Fun fact: It was issued on my birthday (of this year). How very cosmic.

P.S. It lists my name as Jessica Holly Johnson Olsen. That's not a problem, right?

Monday was my 31st birthday. It was a pretty good one, too! Kyle hung up the birthday banner for me before he went to work, and when he came home for lunch, he brought me flowers and balloons! I spent a couple hours that afternoon with some friends (one of whom I share a birthday with). When Kyle got home, he finished up my cake (funfetti with cherry frosting*) and we went to dinner at the Cheesecake Factory. It was good, but I think they've increased their portion sizes—it was a ton of food! We relaxed at home for a bit, then had cake and opened presents. It was a fun day, and the best kind of birthday—one that made me feel special. 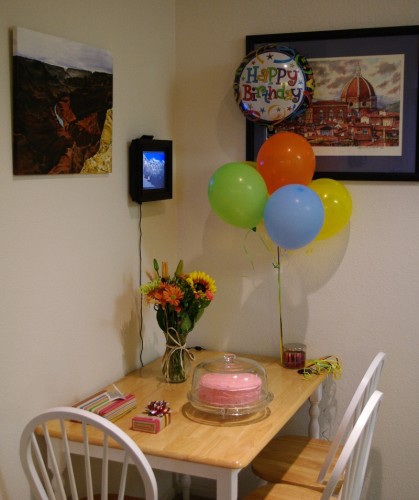 *You may recall that for my first birthday after we got married, I requested a white cake with cherry frosting. And that even though Kyle drove all over Livermore, he couldn't find any, and we had to make do with cream cheese. Well, the next year, he made me a cheesecake, so it wasn't an issue. But this year, Kyle got online and found that the Target in San Ramon carries it! Now, San Ramon isn't super nearby, but I was having my final biofeedback appointment out there in just a couple of days, so I stopped in a picked up 3 cans (you never know when you're going to need some!). Kyle seemed really surprised by just how pink cherry frosting is, and it is his opinion that it smells more like cherries than it tastes like them. I just know it's yummy. OH, and I almost forgot: I talked Kyle into buying these candles that we saw at the grocery store with colored flames. How cool is that? Pretty cool. Granted, the flames are not as vibrant in color as the box indicated, but they still looked awesome.

In other news, I had another ultrasound yesterday to check the baby's growth. I've been getting worried that she's breech or something and huge, so it was good to find out that she's head down and measuring right on schedule. And she kept sticking her tongue out at us! So cute. And her due date is just 4 weeks from tomorrow!

I have had a cold for a little over a week now, and it sucks. I had been feeling a bit better the last few days, but today it is killing me again. My throat hurts, my head is all stuffed up, and I am so tired. I don't like this regression.

Also, in case you were wondering, yes, being pregnant during the summer sucks. I completely realize that it could be lots worse than it is here in California, but it is still true that it has been an unusually warm summer for us. Way too much time spent way too close to 100 degrees (or more). I am not coping well.

Well, this blog post took kind of a nosedive here at the end, didn't it? Don't worry; even though I can barely breathe and feel like I haven't stopped sweating since May, life is pretty awesome. 🙂

Apparently the whole I-need-a-new-birth-certificate issue kind of got left out of my blogging. So now I have to fill in backstory before I can tell you the latest developments.

I dutifully got online in July to request my new birth certificate. The main hangup here is that Puerto Rico's government website is largely in Spanish (in a lot of places you can click to an English version, but not all of them). Fortunately, I did it while Josh was visiting (yes, this was back in July 2010) and he helped me get around the Spanish stuff. Basically, I just needed to tell them a bunch of info from my original certificate (like my parents' info) and, oddly enough, stuff that wasn't on the original (like what city the hospital was in). So that involved a few phone calls to my parents, but we got through it. Uploaded a scan of my photo ID, and done!

Except not really. I got an email 8/2/2010 (so a month later) saying that there was an error. Actually, it said a bunch of Spanish stuff, then it had an English version stating that there was an error. The error itself, however, was not translated, so I had to get some help figuring it out. But the gist of it was that the name on my ID didn't match the name on my birth certificate (duh, I got married), so to call them so I could send them a copy of my marriage certificate. I could also check my application's status if I followed this link (which took me to, you guessed it, a webpage all in Spanish).

At this point, I have to admit to being really lame. I've been really scared to call the phone number they gave because what if nobody there speaks English? Or just has too thick an accent for me to understand? So, yeah, I have let that email sit in my inbox for over a year. I know. I suck. But on Monday, while Kyle was home for lunch, I decided that enough was enough and I was just going to suck it up and call the number. I did. And it rang. And rang. And rang. (You get the idea.) So I hung up and, in my frustration, showed Kyle the original email and the Spanish website they sent me. He told me that if I were using Chrome (I was in Firefox), it'd offer to translate the page for me! So I pulled it up in Chrome and, sure enough, it did! And it worked! Brilliantly! And it turns out that I've had the ability to just upload a scan of my marriage certificate, rather than calling and getting an address to mail one to, all this time! So I did that and they now have it and my application is marked as In Process, not Error. Yay! Maybe I'll get a valid birth certificate before my daughter does!

The events of September 11, 2001 were dramatic.  The images were powerful.  For the families and friends of 2,977 people September 12 would be a tough day to face.  I understand that they were feeling pain, grief, anger, and myriad other emotions.

However, I don't understand why the rest of the country felt so strongly.  Did the entire country become angry and afraid after the Oklahoma City bombing in 1995?  After the WTC bombing in 1993?  Or when it was still believed that the crash of TWA flight 800 was a terrorist attack in 1996?  Or after the USS Cole attack in 2000?

For millions upon millions of us, September 12 was much like September 10.  Nothing in particular about our lives had changed.  So why were so many people suddenly afraid, angry, and vengeful?  I wish I knew.  Perhaps it would help me understand why our country vastly overreacted.  Compare the sweeping changes that occurred after September 11 with the changes enacted after those other events.  Having a tough time?  Me too.  Now, admittedly I was much younger for the other events I've mentioned.  So if you remember drastic legislation changes and invasions occurring after any of those events, please share.  But I don't think any such thing did occur.

So why the massive overreaction this time?  And subsequent overreactions at every new (and all failed) attack attempts?  My best guess is that we, as a country, but in particular government leaders, reacted purely out of fear and anger.  And when you make decisions from a place of fear and anger you make bad decisions.

I also think the anger many felt was a actually a desire for vengeance.  I think people felt their opportunity for vengeance (and hopefully justice) had been stolen from them because the assailants died in the attacks as well.  And not only died, but planned to die and welcomed death.  They didn't feel punishment, they felt rewarded!  I truly wonder if the course of events over the last decade would have been dramatically different if the attacks had occurred in such a way as to allow the attackers to survive.  Then they could have been caught, tried in court, and subjected to sentencing.  Perhaps that would have satisfied the bloodlust of our populace.

Our country changed dramatically after 2001.  But, the attacks themselves didn't change our country.  We changed our country.  In response to this nebulous, faceless threat we decided it would be acceptable to treat law-abiding citizens like criminals.  We allowed the government to conduct warrant-less wiretaps on U.S. citizens.  We gave up our freedoms because we were afraid.  We invaded 2 countries because we were angry and desired vengeance.  Our anger has resulted in the deaths of over 130,000 civilians in those countries.  Our anger and fear pushed our military to use torture and indefinite incarceration (many times on innocent people).

We pounded our chests and talked about how great we are and why "they" hate us for our freedom and liberty.  Then we quietly disposed of a slew of those freedoms and liberties in the name of "safety."  Our reaction to 9/11 as a country was a complete disaster.  And our reaction has cost hundreds of thousands of lives, trillions of dollars, some of the principles we claim to hold dear, and, so far, 10 years of our nation's focus.

I look around at the absurd paraphernalia being sold everywhere right now that demands we "Never Forget 9/11."  And I wonder what that's supposed to mean.  Are loved ones supposed to spend their days focusing on the pain they feel from their loss?  Are the rest of us supposed to spend our days nursing anger and fear?  And I wonder to what end?  Is there anything whatsoever to be gained by never forgetting?

After the attacks I mentioned at the beginning of this post, we, as a nation, mostly moved on and got on with life.  We didn't pass new laws to violate the Constitutionally guaranteed rights of the citizens (which we claimed were why "they" hated us in the first place) to make some people feel better.  We didn't start any wars.  We didn't spend trillions of dollars on changes affecting our daily lives in order to keep us "safe."  We mourned our losses and pushed forward with life.

Until that happens--until we, as a nation, simply get on with life--we'll continue to sacrifice our rights, freedoms, and liberties for hollow promises of security.  We'll continue to respond from places of fear and anger while the world we actually live in crumbles around us from lack of attention.