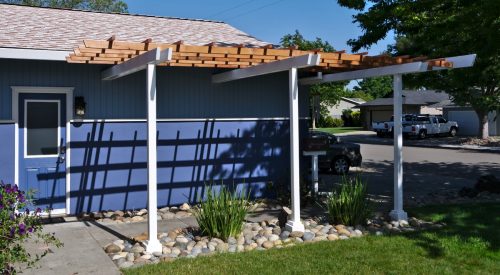 When we had the house painted we cut down the wisteria. It was rotting in the center and insects were living in it so we figured it was only a matter of time until it died anyway.  Cutting it down would let us get it off the pergola so we could have it painted.

Once the wisteria was down it became clear that much of the pergola was rotten too.  Probably because it had not been regularly repainted as it had wisteria growing all over it.  So I took down the pergola as well.

Now that the house is painted and the weather has been nice I finally got around to rebuilding the pergola.  I chose to build it out of redwood so we could let it naturally weather and not have to deal with keeping it painted.  So now when the wisteria (hopefully) grows all over it the pergola won't rot out from under it. 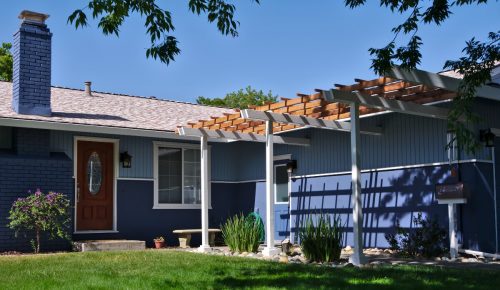 The existing 2x6s are beveled on the ends so I matched the same angle on the redwood.  Since I don't own a miter saw or a table saw, I had to do all the work with a circular saw.  I think it came out pretty well considering I've never built anything like this before.