Just stumbled upon this after upgrading to Grails 1.3.7. One of our gsp pages had an empty code block in it "${}" which was causing this error when trying to build the war. Running the app locally had no problems and Grails 1.3.4 had no errors when building a war with this empty code block, but Grails 1.3.7 did. Since there's nothing on the Internet about this little annoyance I'm putting it here so someone else seeing that error in their console knows what to look for.

Just to put the information in one clean place:

When trying to build a war, I got an error pointing to "codecOut.print(())" as failing. The culprit was an empty code block in one of the gsp files. That is, in one of the gsp files this occured: "${}". Clearly, someone forgot to fill in a value. I filled in the correct value and the war built without issue.

Jess got The Hunger Games trilogy for Christmas. She read them sometime last month and I read them this past week. I was quite impressed. I was a little skeptical at first since the series has been getting a lot of attention. And it seems that oftentimes things that are highly popular tend to pander or don't have any depth. For instance, the Harry Potter series was highly overrated in my opinion, especially since the writing was only mediocre until book 4 (when it improved dramatically).

Anyway, I thoroughly enjoyed the Hunger Games series. It definitely was not formulaic. The analogy I thought of was that the Hunger Games is to Harry Potter as the Daniel Craig Bond movies are to the Pierce Brosnan Bond movies. That is, when Pierce Brosnan was Bond he was basically untouchable. The perfect hero who can get through anything without so much as a scratch. While the Daniel Craig version takes a lot of damage. Sure, in Harry Potter there's plenty of trouble for side characters, but Harry, Ron, and Hermione all end up basically undamaged and triumphant in the end.

The characters in the Hunger Games series are definitely worse for wear by the end.

The storyline is excellent and really drew me in. I had no problem reading for several hours at at a time.

In short, I really enjoyed the series. So I recommend them to anyone who likes stories based in future dystopian societies. 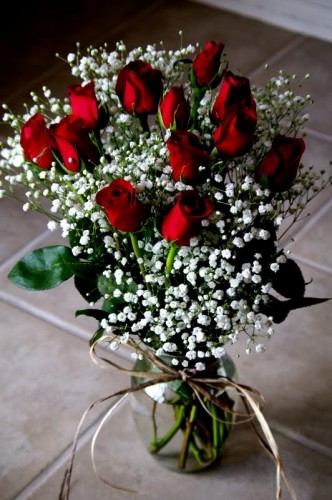 Valentine's Day this year was fairly standard. I always find it humorous to see the guys dressed like thugs trying to act tough while they're waiting in line with a bouquet of flowers and a box of chocolates at the grocery store.

Surprisingly, Livermore has more than 1 (and at least 3!) gourmet cupcake stores. I decided to give one of them a shot and ordered a half-dozen gourmet cupcakes for Jess. I brought them home at lunch, along with some flowers. There were 3 vanilla and 3 chocolate cupcakes. The chocolate ones had a cream filling. They were very tasty. Jess happened to like the vanilla more than chocolate and I liked the chocolate more than vanilla, so it worked out well.

For dinner we went to the Cheesecake Factory. We knew it was going to be busy, but it was busier than I expected. We got there around 6 and there was already a 2-hour wait. But, it's located at the mall, so we just spent the time wandering around the mall. The food was good and we, of course, each ordered a slice of cheesecake to take home and eat once we weren't completely full.

The Monday following our adventure in Utah, Feb 7th, I gave a presentation about GIMP to our camera club. A few weeks back the presidency sent out a survey about club interests to help find topics for presentations. On the survey they asked if there was anything you'd be interested in presenting. So I volunteered to give a presentation about GIMP (free photo editing software). Pretty much everyone there uses some version of Photoshop so I wasn't sure what their response would be, but it went quite well. A lot of people were very interested in being able to do the same things they've been doing, but not having to pay several hundred dollars every few years to do it. Hopefully at least some of them like it and end up saving themselves some money.

Jess claims I'm the one who's supposed to be blogging at the moment. So here are some updates about our last month.

At the beginning of February we went to Provo for another Career Fair. We were looking for Computer Science students but didn't have much luck. We got a total of 5 resumes from BYU CS students. There were probably over 30 Mechanical Engineering students and a bunch of Chemical Engineering students. Which is fine, the Lab hires those people, but we (the two recruiters that went) are from Computations. So we don't really know a whole lot about what Engineering needs or is looking for.

We did have a whole bunch of CS students from BYU-Idaho show up though. Now, no offense intended, but, if we wanted students from BYU-Idaho....we'd....you know....go to Idaho to recruit them. I don't know anything about their CS program and it's probably fine. The two main issues are that 1) BYU has a good reputation at the Lab; BYU-I has no reputation. And 2) When we come to the Career Fair we stay an extra day to do preliminary interviews with students. BYU-I students leave at the end of the day and we don't get a chance to interview them. So at that point they're really not any better off than just submitting a resume through the website cold like anyone else. From my point of view (in terms of immediate employment opportunities) it's kind of a waste of their time and our time when they drive down and talk to us.

We drove out to Provo on the 1st. The Career Fair was on the 2nd. We had interviews and lunch with professors one the 3rd. And we drove back on the 4th. So it was a very quick trip. But we did get to see Erin and Co. And Mom was in town and we saw her. Jess got to see some friends while I was working and we got to bring back another stock of Jess' favorite bread.

So from a business standpoint it was slightly disappointing, but socially it worked out well.

The travel had its own special fiascoes.

We didn't have any weather problems, so that was nice. Clear skies there and back. Though, when we left Livermore it was ~50 degrees and when we arrived in Provo that night it was 6. It felt very cold comparatively.

Anyway, back to the travel fiascoes. On travel days Jess and I like to swing by McDonald's in the morning for breakfast-on-the-go. Now, for years, my go-to breakfast item at McDonald's has been their bacon-egg-and-cheese bagel. I've ordered this in Connecticut (my SAT breakfast), and several times in Utah, and several times in California. When we drove to Texas for Christmas I ordered it in Texas too. But Arizona and New Mexico knew nothing of this "bagel" I asked for. I wrote it off as a strange regional variation in the menu.

BUT! Sadly, McDonald's has apparently discontinued the bagel breakfast sandwiches nationwide. When I tried to order one in Livermore when we left I was told they don't have them anymore. And we saw signs to that effect posted in a McDonald's we stopped at during our journey. I'm quite annoyed by this.

However, the McDonald's betrayal doesn't end there. Oh no. Halfway across Nevada Jess decides she wants some ice-cream, a McFlurry to be precise. Figuring this shouldn't be too hard we pull off in Battle Mountain (sounds like it's straight out of a video game) and into the McDonald's parking lot. We walk inside and ask for a McFlurry and they say they're out of ice-cream. But they're kind enough to suggest a place down the street that has ice-cream (really it was the only other place that looked like it served food in a 25-mile radius). Fine, so we went in there, which was a little coffee shop place, and looked at the menu. We discover they don't offer what Jess is looking for. So we leave Battle Mountain dejected.

An hour later and we're going through Elko. We figure we'll try again. So we pull off the highway again and into the McDonald's parking lot. We go in and order a McFlurry for Jess and a hot chocolate for me. I know McDonald's redid their hot beverages in an attempt to be fancier or something, and I've tried their hot chocolate once since then and didn't like it; but I thought I'd give it another chance. We get our items and get back in the car. We fill up the gas tank before getting back on the highway. As we're pulling out of the gas station and on to the main road towards the highway I take a sip of my hot chocolate and gag. Not hot chocolate. It's some disgusting coffee disaster.

So I manage to get turned around and back to the McDonald's. The teenager behind the counter who took my order, made my drink, and handed it to me looks at me with a blank stare. I hand him the cup and say, "This is not hot chocolate." He look at the cup and then back at me and says, "It's not? sorry..." and wanders off to remake the drink. OK, no big deal, but it wasn't like the place was busy! We had ordered our food and he walked over, made the drink, and handed it to me. But apparently in the 8 seconds it took to walk to the beverage area he forgot he was making hot chocolate. Sigh.

Anyway, this time it is hot chocolate, but it's still pretty crappy. I guess in order to be "fancy" hot chocolate they also had to make it taste bad. But I guess that's what I get for growing up with the sophisticated taste of Swiss Miss. McDonald's is --this-- close to being on my blacklist. But Jess says I'm not allowed to blacklist McDonald's because she still really likes their biscuit breakfast sandwiches.

On our way back from Utah we decided we'd stop off in Sacramento and grab some Panda Express for dinner. So we find a Panda Express on the GPS which should be just off the highway and start working our way through Sacramento. But, turns out that Sacramento has changed their streets since the GPS maps were updated. It asks us to drive through a set of steel bollards and onto the sidewalk. We decline that option and try to work our own way around to the address, but after 10 minutes of getting stuck at one-way streets and not getting any closer we give up on Sacramento and just get back on the highway. I'd be ready to swear off Sacramento too, but our train is going to leave from there next Christmas.