Okay, the last real update on Heather was around Christmas, I think. [shame] Here goes! 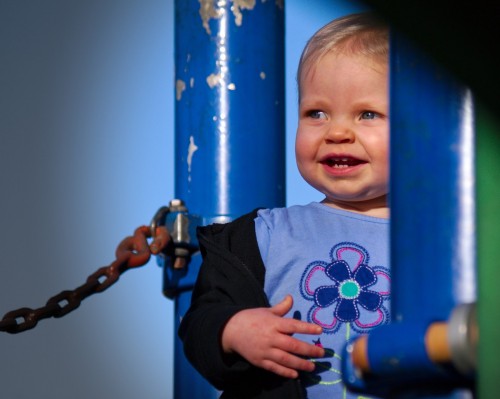 She walks and runs like a pro these days. And dances. And laughs.

As of her 15-month doctor's appointment, Heather did not say one single word. Not even "mama" or "dada." But now, I count 30! For the record, her first word was "eye," said while poking me in the eye. The second was "bubbles." Some are very clear, like those two, but others are a bit trickier to decipher, like "flower" (row-ee) and "cheese" (gee).  And although she's been saying "dad-ee" for a while now, she's just barely starting to say "mama" or, sometimes, "mommy." 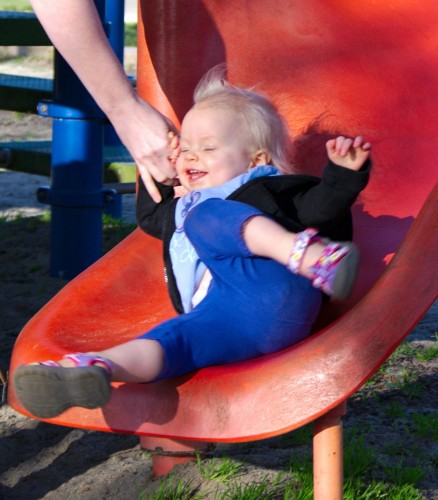 I have an app on my tablet that plays animal sounds, and she loves to imitate them. She's pretty good at it, too! My favorite is her rooster: "ock-oo-oo!" On a semi-related note, she is convinced that giraffes neigh (they look like horses?) and snails hiss ("snail" sounds like "snake"). I can't convince her otherwise because I have no proper sound for those animals to teach her. 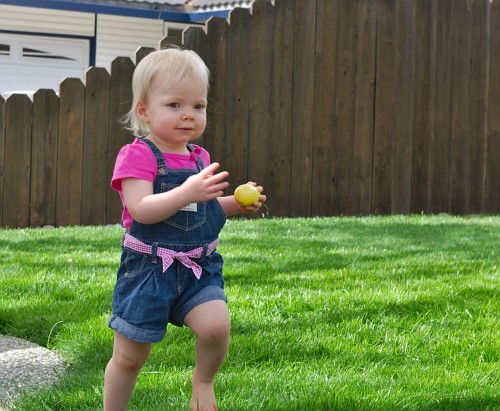 Let's see, what else? I completely weaned her around 13 or 14 months when she started biting and refused to stop. We'd been down to only nursing before bed for a while, but with the biting, it stopped being a soothing part of the routine. So I stopped and she really couldn't have cared less. So we haven't looked back! She's a pretty good eater, too. There's not a lot she won't eat, though she will sometimes decide she doesn't want a certain food for a while. A week or two later, she'll be back to scarfing it down. I would say that her two favorite foods, though, are easily eggs (fried or scrambled) and macaroni & cheese. She'll eat astonishing amounts of either.

Oh! She now goes to sleep entirely on her own. I don't think I can communicate how much my life improved when I stopped having to get her to sleep. At her 15-month appointment, Heather's sleep had gone completely haywire and I was at my wits' end. Her pediatrician recommended a modified cry-it-out method (with frequent checks) and addressed my concerns about it. I decided to give it a shot, and it worked great! I can now put Heather in her crib and just leave. She puts herself to sleep. It's fantastic! Although, in the last month or so, she's started taking a really long time to fall asleep. Like, over an hour. She doesn't cry--she plays happily in there, and does eventually go to sleep. So I don't know if I should adjust her nap/bedtime, or if she actually needs that time to herself. We'll have to see.