We started off Saturday by going to the Primary Easter Egg Hunt at the ward building. Mostly, we hung around and watched, and then helped point out ones the kids couldn't find. After that, we stayed because Kyle had signed us up to help clean the church. This is where the day started to get long and tiring (and I'll admit that since I'd cleaned the apartment on Friday, I was tired of cleaning before we even started). We cleaned for about an hour and a half and then came home for some much-needed lunch. When we did, we discovered that Kyle had a voicemail from the furniture store: our nightstands were in! Huzzay! (Okay, I just looked, and it seems that we never blogged about our nightstands. But we spent an epic trip at a furniture store in mid-Feb. picking out nightstands, trying to find ones we liked that would match our bed. But we were told they would take 6 weeks to arrive, so here we are.)

All we had to do now was find a truck to transport the furniture in, right? (We had opted out of having it delivered, as the store is in San Leandro, half an hour away and that tends to make delivery ridiculously expensive.) We'd planned on just going to Home Depot and renting a truck ($20 for 75 minutes) like we'd done previously, no big deal. So we told the store we'd be down, though it may take a couple hours (just to be safe), had some lunch, and took off for Home Depot. It was then 1:00 p.m. My only explanation for what ensued is that the weather out here is starting to get really nice, and everybody and their dog wants to take advantage of that (and for a lot of people, that means doing outdoorsy projects that require big trucks? I dunno). Home Depot's truck is unavailable until Wednesday or Thursday. Lowe's does the same deal, but their truck was being used for a delivery (and no, they don't know when it'll be back or even where it's being taken to. (Really? No managers keeping track of that? That seems odd, especially when they could be making additional money by renting the truck out, but whatever.) And no, they couldn't take our name or call us (of course, a store that doesn't keep track of their own property or personnel wouldn't do anything as service-oriented or sophisticated as a reservation), but we could call them back later and see if the truck was back. So we came back home. FAIL.

Kyle then started to look around online and make phone calls, and the results were extremely frustrating. Most moving companies will rent you a truck a day at a time, for something like $50 plus mileage. U-Haul will rent a truck or a van for $20 (I think) plus mileage, which would have made it around $60. The HD and Lowe's in Dublin had both rented out their trucks. The Lowe's in Pleasanton had rented out its truck, but the HD there had its truck available. So we hurried over. Of course, in the ten minutes it took us to get there, somebody else had showed up and rented it. By this point, it was a little after 3:00, and Kyle knew that the truck from Pleasanton's Lowe's was due back at 3:45, so we decided to camp out there and wait for it to come back. By 4:15, we were sitting on the floor in front of the Customer Service desk (out of the way) and all the employees at that desk knew what we were waiting for. (They were pretty nice about it.) We were still just worried that we would miss it and it would get rented out to somebody else while we weren't looking. Finally, at 4:30, the guy returned the truck and we got on our way. It only took 3.5 very frustrating hours.

I guess the good part is that Kyle was so tired by this point that he couldn't get all worked up about having to maneuver the big truck on the highway. He handled it much more calmly than last time. 😀 Anyway, we got the nightstands and brought them home. Of course, we got stuck in the evening highway traffic we'd been hoping to avoid by doing all this in the early afternoon, but whatever. We were glad just to get back home again. And now, pictures! 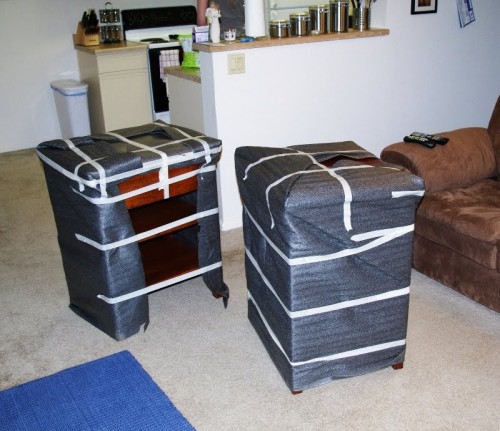 And now, unwrapped (I'm just wiping out one of the drawers): 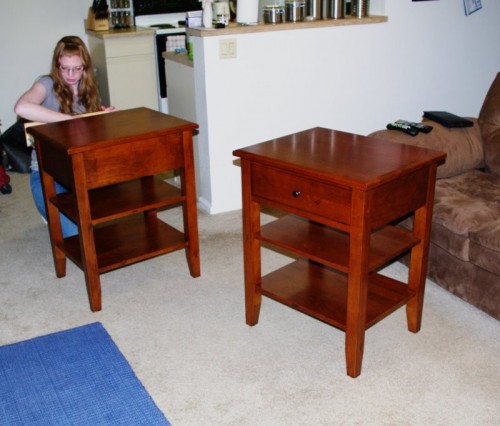 Aren't they pretty? I love the color. They match the bed really well (it's not perfect, but it's dang close) and I have always enjoyed wood with reddish hues. So warm and comforting. So then we got to put them back in the bedroom and load them up, which was great. I like to have a lot of stuff within reach of my bed (y'know, in case I need it (yes, it's the pack-rat tendency!)), so I've just had a huge pile of stuff on my side of the bed. It's all sensible stuff, though--water, music, books, scriptures, drugs, etc. Anyway, here are my and then Kyle's nightstands all loaded up. ('Cuz I know you care!) 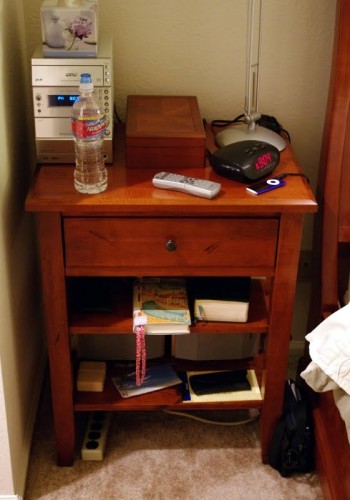 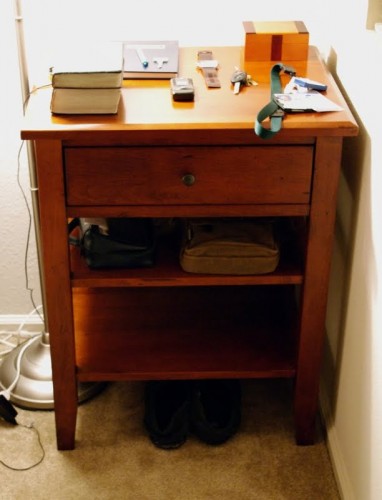 I don't know if you noticed, but the floor lamp is on Kyle's side of the bed. Since that's the only light in the room, we're both very excited for me to finally have a place for a lamp, given my tendency to stay up reading. Yay! And lastly, the overall effect: 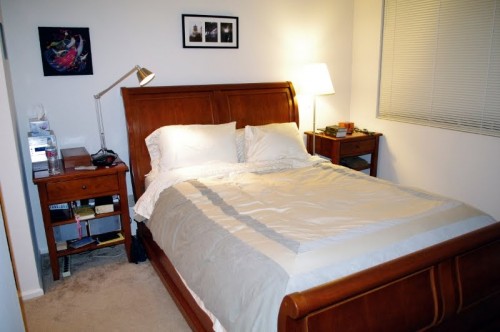 I swear, it's starting to look like a real bedroom in there! Y'know, for grownups!