Still playing catchup here. It should go faster now, though.

We stayed at a hotel near Yale. Not much to say about this bit: it was rainy. Connecticut is beautiful, though, and I really like it. Oh, and our hotel was awesome. It's called the Study at Yale, and it's all studyish! Way fun. 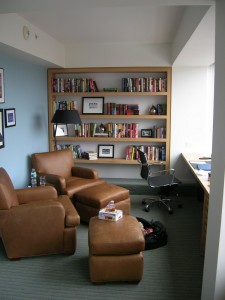 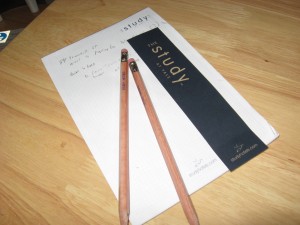 We left Wednesday afternoon for New York City. I'd never been there, so I was excited. We took a train, too! I found this immensely exciting. 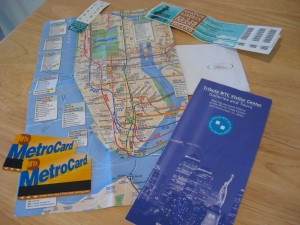 Shown in the above picture: subway day passes and a map, the train ticket down, tickets to Liberty and Ellis Islands, and a WTC brochure.

The day pass came in handy when I locked myself out of the subway by not knowing how to properly negotiate the turnstile. That was annoying, but we got cheesecake while we waited for it to let me in again.

Wednesday afternoon, we just went to Central Park and Rockefeller Plaza. So, I knew that Central Park is big, but I thought it was all grass. Not so! Tons of trees and such, and they hide things in there! Like a carnival. And a zoo. And it's so weird to see all those trees with the skyscrapers rising up behind them. 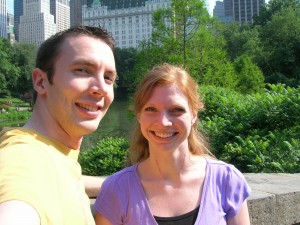 Here's Kyle at one of my favorite hidden things: a wonderfully trellised chess playing area! 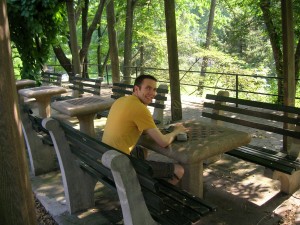 And this is me, eating breakfast (a granola bar) and looking out the window of our hotel room the next morning: 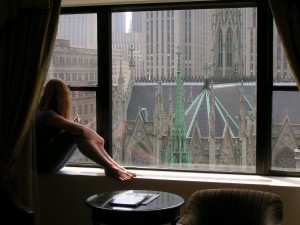 We had a lot to do that day! We started out by going to Times Square. It was so busy! And those ads are huge. Then we found a subway station and were off to the site of the World Trade Center. Basically, it's a huge construction site. Complete with fencing so you can't really see anything (if there's still a viewing platform anywhere, we couldn't find it). At this point, we got very lost. Kyle got all turned around and his internal map was no longer matching reality. (I still don't quite get this, since I have no internal map at all. This means there's nothing in my head whatsoever to confuse me when I arrive somewhere I didn't think I was going, but that's what kept happening to Kyle.) For obvious reasons, we let the guy with a map in his head navigate, and he eventually got it sorted out. We spent a long time wandering around in search of a subway station, but we did get there. Of course, that's when I locked myself out, so a cheesecake break was actually exactly what we needed, I think.

Anyway, we did eventually get onto the subway and down to the ferry (another mode of transportation I was very excited about, having never been on one before). Kyle stood in the blistering sun to buy tickets while I sat in the shade (such a good husband!), and then we got to go through security, just like at the airport. But we eventually got onto a ferry headed out to Liberty Island. Guess what? The Statue of Liberty is large. Which is basically all there is to say about it.
Next, we hopped back onto the ferry for a trip to Ellis Island. This was super cool, 'cuz they've got an amazing museum there. The main floor has a bunch of exhibits about immigration, like country of origin charts and such, but they're done in interesting ways, so it's not lame. The second floor has several different rooms, each explaining a different step in the immigrants' process of being allowed into America. There were all kinds of examinations, like intelligence, mental health, and legal status. It was super interesting, and one of my favorite things we did in NYC. 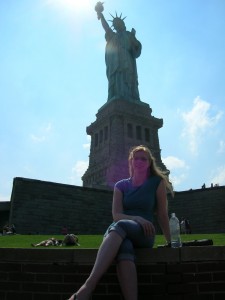 We took the ferry back to Manhattan, then got on the subway again. (Side note: some of those stations are massive! I had no idea how big they were until we got lost in a couple of them.) (Other side note: I'd always heard that New Yorkers were rude and mean, but we had several people offer to help us figure out where we were going or help us with stuff. It was very nice and very unexpected.) So, we get off the train and head above-ground again, only to be stopped at the bottom of the stairs by a crowd of people who weren't quite ready to venture out into the pouring rain that had appeared out of nowhere. (Now, I'd been carrying around an umbrella all day b/c the weather forecast called for thunderstorms. Thus far, it had been sunny and hot, and I figured my umbrella efforts would be wasted. But I was so glad to have it with us!) We busted out the umbrella and tromped up the stairs into the worst thunderstorm either of us has had the pleasure of being in in years. The Manhattan temple (which was what we had come to see) was just across the street from the station, so we darted across and sheltered under the overhang with a bunch of other people. On the way across the street, I peeked out from under the umbrella long enough to see the angel Moroni. It was impossible to get a good look at the building, though, 'cuz it was just raining too hard. We could see Lincoln Center across the way, though, and we enjoyed watching the storm for a while. It just kept getting harder and harder! 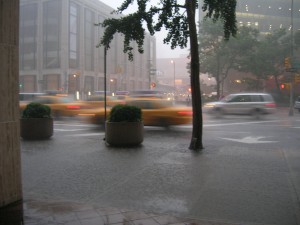 (You can't really get the severity of the storm from that pic, but it was awesome.)

We had wanted to visit the Empire State Building and the Met, but we were both really tired at this point, so we decided those could wait until our next trip. I was all for walking back to the hotel, but Kyle insisted that it was a lot further than I thought it was, so we popped back underground again to the subway. (He may've been right about that, but don't tell him I said so.) So we went back to the hotel to retrieve our bag, then headed to Central Station for the train back to New Haven. Kyle's parents picked us up there, and we got back to Cromwell.

We stayed in a hotel in Cromwell, and our main priority for this part of the honeymoon was to relax and recuperate. NYC was awesome and fun, but very tiring, so we took that weekend very easy. Saturday night, we went to see Up, which was great fun. I loved the short at the beginning, too. On Sunday, we went to church and then had dinner over at Kyle's parents'. We also opened gifts, which was fun. 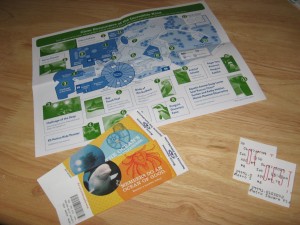 On Monday, we went out to Mystic to the aquarium there. This was my other favorite thing we did. It's a great aquarium, with sea lions, beluga whales, and penguins outside in tanks so you can see them both above and below water. The inside exhibits had all sorts of crazy fish, sharks, and octupi, which were super fun, too. Kyle was disappointed that the penguin shelter was closed for renovation (he'd been telling me about these penguins for weeks!), but we did still get to see a couple of penguins in another room. Just not nearly as fun since there was no water. I told him we could go back, though. For dinner, we managed to track down the one and only Mystic Pizza, which was quite good. We also got to see a drawbridge in operation with real ships going under it!

This was the day we flew back to Utah. That basically took the entire day. I had the longest flight of my life, from Hartford to Las Vegas. But I got to see cool Las Vegasy stuff from the plane, so that was neat. Once again, we were exhausted. But even though the honeymoon was over, the fun was just beginning.