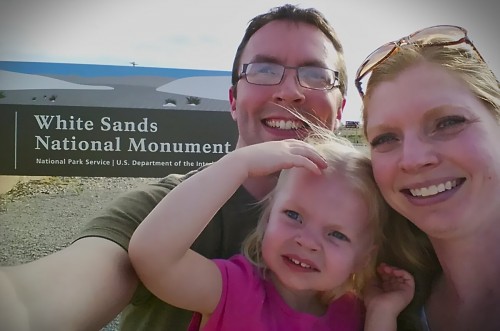 After Carlsbad Caverns we headed off to White Sands National Monument.  When planning the trip I wondered whether it would be worth it to stop off to see some sand, but it wasn't too far out of our way and it was worth it.

We arrived in the evening and I expected the air to be hot and the sand to be hot from sitting in the sun all day.  But it wasn't.  The sand was amazingly cool, not like sand at the beach for whatever reason.  The sun was on its way down and mostly behind clouds and there was a nice breeze so instead of being unbearably hot it was almost pleasant.

Heather thought it was the most amazing thing ever.  When it was finally time to leave she decided to just take off into the dunes instead.  There's nothing dangerous around so I just followed behind her waiting for her to get tired out which she eventually did after running up and down a couple of dunes.  You can buy sleds from the gift store, but since we didn't know what it would really be like out on the sand we didn't buy one.  However, a family that stopped at the same place as us let us borrow one of theirs for a little bit.  It didn't work out very well, but it's the closest thing to sledding Heather's ever done anyway.

We discovered a fun game of taking some of the more solid chunks of sand and hurling them way up in the air and then watching them land.  When they land they make a very satisfying thud, but explode into plain sand.  So it just disappears back into the all the other sand.  It was fun.  Heather got into pretty quickly, so here's a video:

If you're in the area it's worth a stop.  You'd think that a whole area covered in sand would be pretty dead, but there's actually a fair amount of life going on.  I managed to spot a few of the white lizards that live in the sand.  There are plants that rapidly grow as a dune moves over then, but then when the dune passes they collapse down in a heap.  And there are other plants that hold a column of solidified sand underneath themselves when the dune passes by them.

Once we finished up at White Sands we headed into Las Cruces, NM to stay the night.