Believe it or not, Heather is 11 months old. I can't believe how fast time has gone by, nor how big she is! Here's what she's been figuring out these last two months:

She can clap, which she loves. (Though what she loves even more is to grab my hands and make me clap.) She's recently learned to wave, though it usually looks more like a "come here" gesture than a wave. Sometimes she'll flap her whole arm, though, and it's clearly a wave. 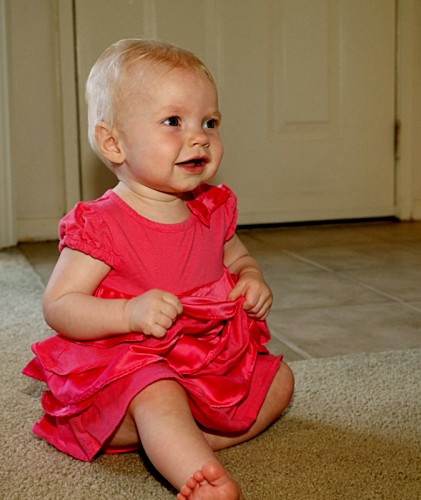 Some of her favorite toys are her books. She'll sit and pull her board books out of the bin and turn the pages and stare at the pictures. She loves to turn the pages, so her favorite books are the fatter ones that she can just keep going and going with. 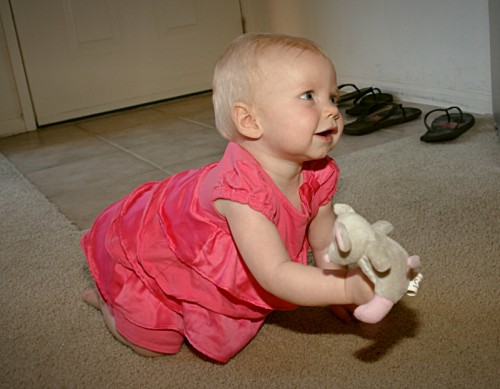 She's getting much better about playing by herself, and it's wonderful, but every once in a while, she'll crawl over to where we are and start grumping and generally making a nuisance of herself until one of us realizes she has a poopy diaper. It's hilarious.

My very favorite development is that she has become a snuggly baby! She never has been, but now she'll crawl up to me or Kyle and lay her head down on us for a few seconds. Especially if I've been kissing and squeezing her, she'll snuggle me back. Then she's usually off again, but it's so adorable. She loves us! 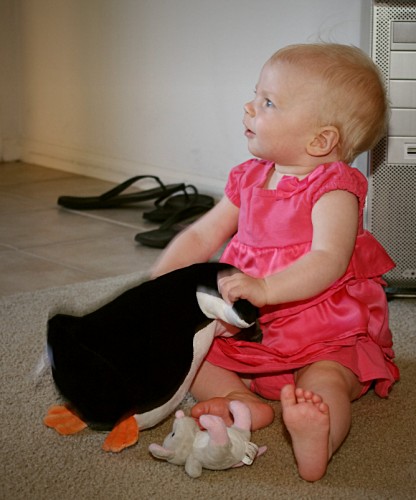 Heather doesn't do this very often, but every once in a while, she'll sing along when I'm singing her lullabies to her. It's just this tuneless "aaaAAaaaaaaAAAaaa..." but it's awesome.

My baby girl is turning into a monkey. She's climbed up onto her exersaucer multiple times, and she'll stand on anything if it gives her a few more inches of height so she can reach more stuff. And no matter what she's standing against (couch, tv stand, chair, whatever), she's lifting her legs and pulling with her arms to try and climb up. 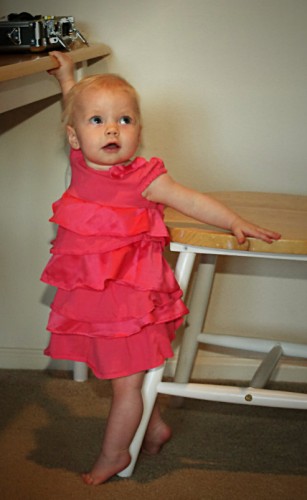 She's gradually moving into the stage where she is not only destructive—she's also constructive! We've taught her to put her bath toys back in their bag, and she's experimenting with stacking blocks and the like, which is so fun to see.

Lastly, our sweet little girl has adoring fans wherever she goes. At church, she entertains the people behind us, for several rows back. Cashiers at the grocery store find her adorable, and all the employees at the LoveSac store in the mall are completely charmed by her growls. Complete strangers tell us that she's adorable, and all we can do is agree with them. We have such fun with her, and we love her so much! 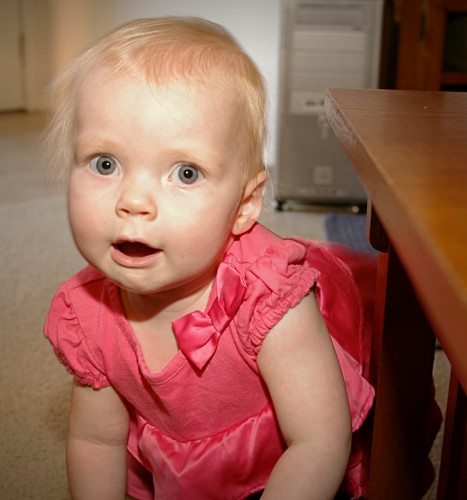 And now for a couple of videos. Kyle's attacking her with the tickle plane in the first one. Usually she gets more excited than this, but she gives a couple of laughs.

In this video, Heather's just kind of doing her thing. Enjoy!