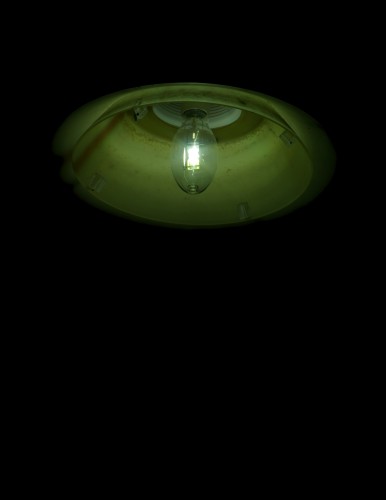 As many of you probably recall, Jess and I drove to Texas in protest of the TSA grope-a-thon required to fly these days. Before the new, creepier security screening processes were put in place we had purchased airplane tickets with Southwest. When the change occurred I was particularly unhappy. I called Southwest and asked for a refund, which they refused to provide because "we don't control the TSA; it's not our fault."

So I moved to plan B: I filed a charge dispute with my credit card company (CitiBank) and carefully detailed why I considered the scenario to be a breach of contract. They conditionally refunded the money and sent the dispute to Southwest which had 60 days to reply. The reply just came through and my refund has been made permanent! Hooray!

On a related note, an update about the letters we sent to the airlines and government officials. Every airline responded with a written answer. Most were along the lines of "it's not our fault, we can't do anything about it." But the response from American Airlines was very simple and direct:

Thank you for taking the time to contact us about the recent changes that the Transportation Security Administration (TSA) has made to checkpoint security screening procedures. We are monitoring our customers' feedback on this issue very closely, and we thank you for providing us with your impressions.

They're the only airline that didn't simply deflect the issue away from themselves. I appreciate that. The airlines claim they have no control over the matter and, ostensibly, they don't. However, they do have rather influential lobbying efforts which could certainly be brought to bear on the situation. And that's the goal I'm going for. If they get enough pressure and begin losing enough customers they will find a way to reign in the TSA.

Now for the responses I got back from the government officials. We wrote letters, (physical letters!), to our two Senators, our House Representative, the TSA, the FAA, and the President. We received exactly zero replies. In over two months not a single person, organization, or office responded to our concerns. No form letters, no acknowledgement of any kind. That really kind of bothers me.

The fact that no part of the government could be bothered to even acknowledge our concerns is why I have very little faith that anything will change until the airlines start lobbying for it. I've now learned very poignantly how little my opinion matters to the people who are elected to represent my interests.

Thanks America, you're really doing a bang-up job with that democratic republic business.

So the scores are:
-1 to Southwest for denying me the refund when I asked for it on the phone.
+1 to Southwest for not denying the charge dispute when I filed it with my credit card company.
+1 to CitiBank for taking care of this for me (using a credit card does have some great benefits).
-100 to the TSA for implementing stupid "security" rules.
+2 to the Dickersons who successfully received a refund from a large company.
+5 to airlines for acknowledging my complaint.
-20 to government officials/organizations for not acknowledging my existence.

Kyle had today off, so we started out the way all holidays should begin: sleeping in. Then we went to the new Denny's Cafe up the road to see what that's all about. I was happy because I got a tasty breakfast for lunch. While we were out, we stopped at Home Depot for some supplies: a new pot, a set of drill bits, and a hook. Our goal for the afternoon was to hang the windchimes my parents got us for Christmas and to re-pot the rose bush. It had fallen victim to some idiotic vandals (isn't knocking a potted plant off its ledge and onto a cement patio where it will shatter into a million pieces just about the funniest thing you can think of to do on a Saturday night at 11:30?). Anyway, we got the chimes hung (with the help of a ladder we borrowed from friends, though w/o using the drill or hook) and the plant re-potted. Hopefully it's not too shocked to live. 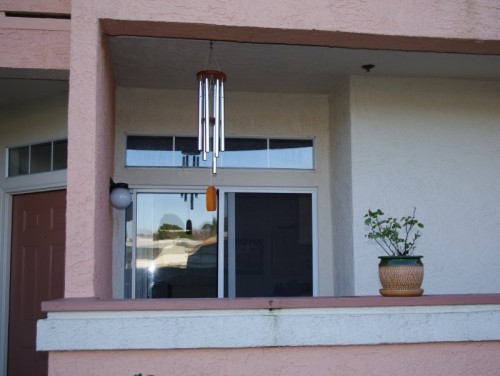 It looks nice, right? I'm not sure how much wind the chimes will get in there, but we'll see. They sound amazing! And here's my handyman: 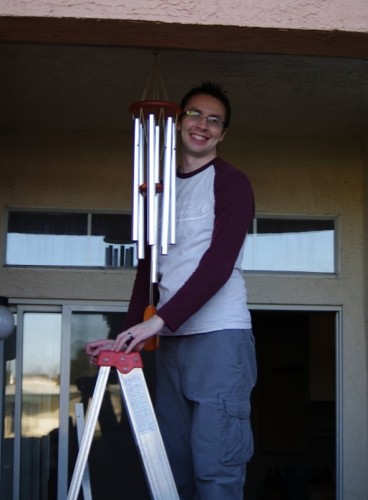 It's been two years since my surgeries, and I really think that everyone should get to celebrate that they're alive every year. It's so much fun! (It has been argued that this is what birthdays are for, but I think it's different. Feels different to me, anyway.)

So the anniversary of the second surgery was on Saturday, and we decided to go out to dinner to commemorate the occasion. There's a local Italian place called Strizzi's that I've been wanting to try, plus Kyle won a gift card at a work party last month. It was decided! We walked around downtown Livermore while we waited and then got to sit at a tall table (I love tall tables!). The food was really good and we sat around saying things like, "Two years ago I couldn't have eaten this food, since it's definitely not a clear liquid diet," and remembering how my awesome friends and family got me through.

It was a good evening. 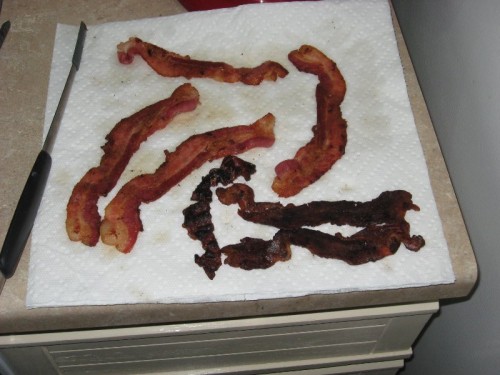