Well, I said last month that Heather's feet would be in her mouth soon, right? Here you go: 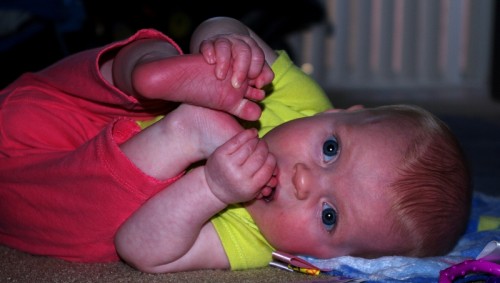 She chews on her toes all the time. She even spent most of Relief Society one week, laying on my lap with both her feet pulled up to her mouth, going from one foot to the other. She's also started sucking/chewing on her thumb, though not for very long at a time. It's pretty much the cutest thing ever. And I don't know if she's actually teething yet or not, but she has definitely figured out biting/chewing. She spends as much time chomping on things as sucking on them these days. Even her pacifier! Speaking of which, she learned a trick a few weeks ago, going from this: 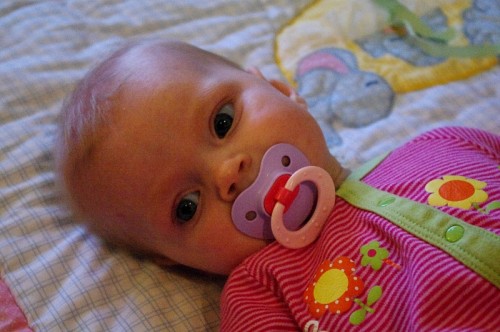 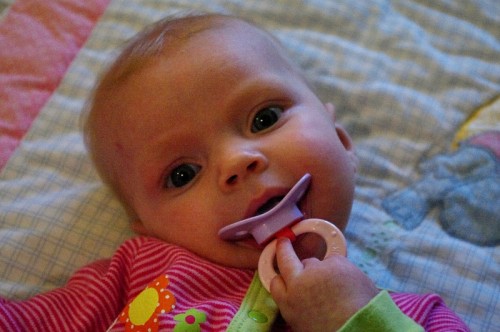 While sucking on the binkie, she opens her mouth as wide as she can, then pops the bottom edge of the binkie in with her fingers (while keeping the nipple in there, too) and bites down on it. I don't know why this is so entertaining for her, but she does it all the time.

Solids are going great. She's now eaten rice cereal, oatmeal, barley cereal (mixed with prune juice these days, to keep things moving), avocado, and sweet potato. (This week, her new food will be butternut squash!) So far, she's loved everything we've fed her, though lately she seems to like the cereal less than before.

My least favorite recent development is that Heather will no longer fall asleep for Kyle. We have no idea why. This sucks because putting her down for naptime/bed was already my least favorite part of the day, and now I get no relief. On the subject of sleep, though, she's started doing very strange things when she's trying to settle down to sleep. She sleeps in basically two positions: (1) flopped over to one side or the other, with her legs out in front so she makes an "L," or (2) flat on her back, with her hands up behind her head, elbows out, and her feet up near her bum, with her knees flopped out (yes, it looks ridiculous). Oh, and Henrietta is usually over her face. But before she'll settle into either of these positions, she flops around like a crazy person! Her hands/arms pull up so she can rub her face in Henrietta, and her legs get pulled up, straightened out, and then slammed down onto the mattress, not unlike a bull pawing the ground before charging. Over and over and over. It's insane, and I have no idea how it helps her relax. But it seems to. 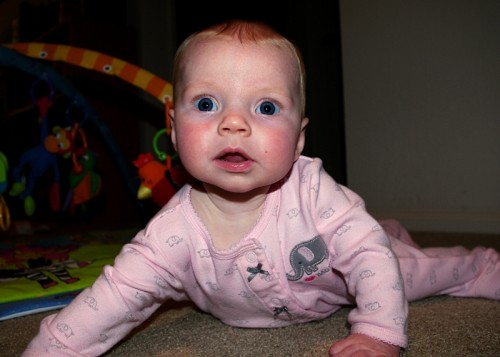 Heather can laugh now, but Kyle's the best at getting her to do it. It's mostly when you tickle her, or do something along those lines. It's really weird though, this kind of barking chuckle.

She really likes going for walks in her stroller. She just sits up (sometimes even leaning forward) and LOOKS at everything. Cars going by always get her attention, and it's funny to see her head whip around as she follows them. 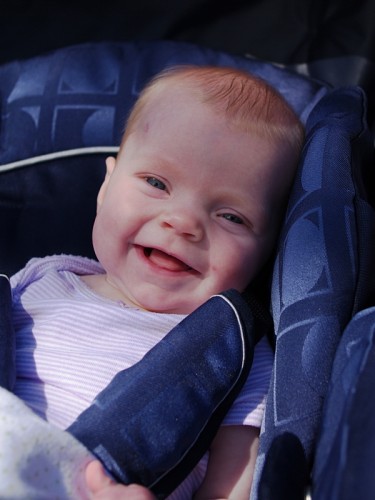 All of a sudden, Heather became quite mobile. She's been able to roll from her stomach to her back for a while now, and there was a lengthy lead-up to learning that skill. But one morning, she just started rolling from her back to her front, and now there's no containing her. She can roll around all over the place, and she can squirm a little bit to get things that are just out of her reach. It's pretty funny to look away, then realize she's moved a few feet in the time you were checking your email. The other morning, I laid her down on her playmat, then sat down to eat my breakfast. When I got up to put my dishes away, she was like this: 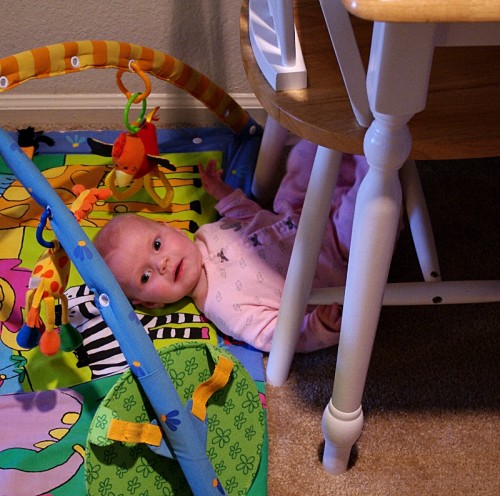 Originally, she had been turned the other direction (feet to the left of the picture) and was entirely on the mat. I really can't figure out how she wriggled down between the chair legs like that.

So, to begin with, Heather would swat at things with her fists. Then she progressed to grabbing things. Now, she's on to touching things. She'll reach out and just kind of feel the hanging toys on her playmat. It's really cute. And while she's nursing, she'll often reach up and play with my hand or try to reach some of my hair so she can run her fingers through it. (Also, she loves Kyle's hair. She thinks it's super fun to run her hands through.) She also reaches out for faces, particularly mouths. And when we read to her, she'll sit way forward and try to grab the pictures on the pages. When do babies recognize the difference between pictures and real objects? 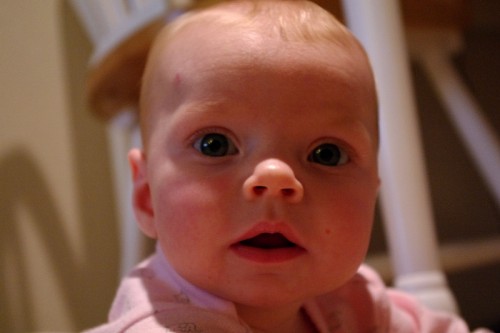 I was all set to tell you all that Heather's sleep has gone back to normal, and even improved. For several days, that was true. It was easy to get her down, and she'd even nap for an hour or two at a time, which she has never done with any regularity. But now we're back to lousy naps again. Honestly, I feel like I have two babies. Happy Heather seems to only show up for a few days at a time every few weeks, but she's fantastically awesome and fun. She naps like a rockstar and is happy and a true joy when she's awake. But mostly, we get Fussy Heather, who naps very poorly and is only really happy for a half hour or so after waking up. Much of the rest of the day, she's cranky and clingy and very demanding, not enjoying anything for very long. I wish I knew how to make her happier more often. My personal theory is that something makes her uncomfortable (gas, constipation, teething, whatever), which both irritates her and keeps her from sleeping well, making things even worse. I don't know if that's accurate or not, though, and even if it is, it's difficult to tell what's bothering her or how to help.

Even so, she's totally adorable and we love her very much. How could you not love this face? 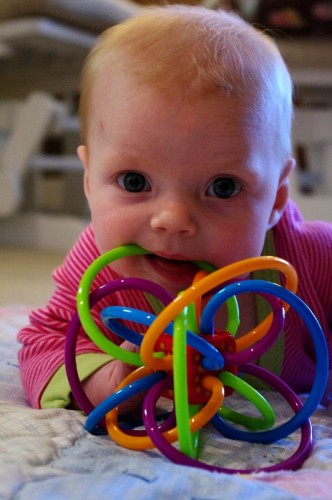