Like I said, we arrived back in Utah and checked into a hotel in Orem. We tried to get some rest for the insanity we knew was coming.

We got up early to get to the dealership and pick up Kyle's car (if you recall, it broke and had to be hospitalized just as we were leaving town). Kyle was scheduled to defend his thesis at 10 am, and the movers were to come to my house between 9 and 10, so he took off for campus and I headed over to my house (aka, T and BJ's house). I was way bummed that I couldn't go to Kyle's defense, but Kyle called me at 9:55 to say that the movers had just called him, and they wouldn't arrive until 10:30, so I could, in theory, come to campus and see most of his presentation. Of course, I couldn't actually get from Orem to campus in five minutes, and when I did arrive, I'd have to turn around and go back. Sadly, I stayed at T's. Well, the movers got lost and called me at 10:55 for directions (apparently, they'd been calling Kyle's phone all through his defense) and finally got to my house at 11:10. I totally could have gone to see Kyle defend. I was pretty annoyed about that.

BUT, for the record, moving with movers is totally the way to go. I sat on the couch, held the baby, and talked to T while they packed up my room and loaded the truck. It was lovely, and I'm considering refusing to ever move again without movers. Especially when compared to the madness Kyle and I both endured getting my stuff to Orem from Provo two months ago. Way more stressful.

The movers finished up my place and we went over to Kyle's. Inconveniently, he was still stuck on campus doing paperwork (after having successfully passed his defense!), so I got them started the best I could until Kyle came back. The company that was shipping my car was there to pick it up, too, so I handed that over to them and said farewell to independent transportation for a week or so. That was weird. We eventually got all Kyle's stuff packed up and the movers were on their way.

Full day, right? Not done yet! We still had an open house that night. We swung by Costco to pick up the cake (thanks, Josh, for getting that all ready to go!) and by Panda for the food and headed up to Riverton. We'd wanted to be there by 5, but with one thing and another (including a crazy thunderstorm on the highway), we were at Panda at 6, when the shindig was supposed to be starting. But we were at the Homers' house by, oh, 6:15 or so, and the majority of our guests were coming from the same direction we were, so they got weather and traffic, too. We unloaded food and Wiis and went upstairs to change into our formal gear (we wanted one last wear out of it, even though it was casual dress for everyone else).

We both had tons of fun seeing our friends and unexpected family members. The food was good, and we got to play Guitar Hero and Mario Kart and even croquet. (Sadly, I don't have pictures of these happenings yet. I'll probably post them when I get them, though, because it was rather a sight.) Very late that night, we trundled back over to the hotel and collapsed. We were exhausted.

This was recuperation-and-tying-up-loose-ends day. Mostly, we slept in really late. And ran a couple of errands before leaving town.

We packed up Kyle's car with wedding gifts, luggage, and a few more delicate items we didn't want put in the moving van and headed out to California. On our way out of town, though, Kyle detoured us over to the Kennecott copper mine. 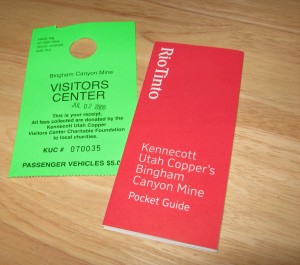 I've been wanting to go for months, and Kyle said we could. But at the time, the visitors' center was closed for winter, and then things got really busy. I mentioned it once a month or so ago, and Kyle said we still had time. But then we both got really busy, what with moving and thesising and marrying and such, so I just figured it wouldn't happen. I should have known Kyle wouldn't forget!

It was way fun, too. It's an open-pit mine, and it's huge. Just a mind-blowingly massive hole in the ground, but it's all tiered and such, and you can see trucks working down at the bottom and all along the roads up it. They look like little toys down there! There's some fun stuff at the visitors' center, too, about the process and suchlike.

We decided to take this trip a bit slower than the last one and stay the night in Winnemucca, NV. There's really not a lot to say about the area: it's desert and casinos as far as the eye can see. Both days of travel went smoothly, though, and we got to Livermore in plenty of time to check into our hotel and find fireworks to celebrate the Fourth. Livermore has a whole fair-type-thing, and we got cotton candy, which made my day. The fireworks were awesome, and I was glad we got to see them. (Usually, if I don't get fireworks on the Fourth, I can always try again on Pioneer Day. That probably won't work this year...)

On Sunday, we attended our new ward, and it went well. It was weird to introduce myself as Jessica Dickerson, but everybody was really nice and welcoming. Most of the people here seem to really like the ward, so that's a good sign.

We finally got to move into our apartment! We got over here, did check-in and inspection of the property and whatnot, and then it was time to try and procure some necessary furniture and housewares and such. Mostly, we wanted to get a bed on Monday so we could have something to sleep on that night. That so didn't happen. The entire process was one frustration after another: nowhere did same-day delivery, the mattress we wanted from IKEA didn't come rolled up like we thought it did, Home Depot wouldn't rent us a truck for long enough to get back up there again, etc. We were both very frustrated with the mattress situation, but we did find a fabulous bed we both like that should last us for probably the rest of forever. Major sale, too, which was the only way we could afford a bed that would last us forever. 😀 We found some bedding at Bed Bath & Beyond, and an air mattress at Walmart. Very much not the best night's sleep we've had.

This brings us up to yesterday, which was also very full. Kyle started his job at the lab (it was all orientation-type stuff, and it sounded very boring) while I stayed home for deliveries. The movers came at around 10 and brought everything in. The unpacking of it all looks to be a very daunting task: 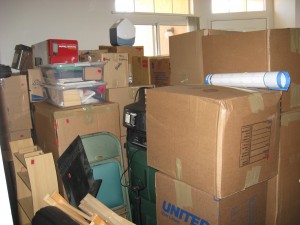 That should take some time. Yeah. Also, though, the bed was delivered, which was nice. And we even managed to get a mattress! We rented a truck from Home Depot, drove out to IKEA, got the mattress and box spring loaded up, came back, unloaded the truck, and got the truck back to Home Depot in just a couple of hours. It was great. (I learned, though, that my side muscles are NOT as strong as they used to be. I could feel all the muscles around where the chest tubes went pulling and straining: lifting that box spring about did me in. I wonder if it's still just healing, or if the scar tissue is what it is and that sort of thing will always be more difficult. Guess we'll find out.) We slept lots better last night, in a real bed, on a real mattress.

And now we're up to date! Kyle just left for work, and my morning dose of Excedrin is kicking in, so I'm about to go get ready for the day. My car should be delivered at some point today, so that'll be nice. Then I'll be able to run errands while Kyle's at work, instead of having to wait until he gets back and traffic is bad and stores are closing.