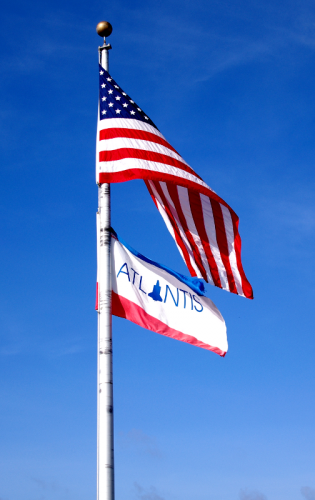 Friday was the big day of the launch. Our vehicle placard was for 9:00am, so we were supposed to arrive at the visitors' center by that time. Expecting traffic to be a disaster we planned to be on the road by 7 at the latest. Mom had decided to ride with us to make travel arrangements easier for everyone else and since she'd probably be up by that time anyway.

So we got up before the sun and got ready to go. The free breakfast at our hotel started at 6:30 so we popped in there right after it opened and grabbed some food to eat on the road. We picked up Mom and headed off. I re-routed us around Orlando to avoid any normal traffic delays expecting regular commuter problem to be exacerbated by launch-watchers.

Being so early we didn't have much trouble. About 10 miles out we hit bumper-to-bumper traffic on the single-lane-per-direction road connecting to the causeway over to Merritt Island. It moved along fairly regularly though. The placard checkpoint was about 6 miles out from the visitors' center and once we passed that it was smooth sailing to the parking lot. All in all, our drive out was not bad. It took about 2 hours total.

Another group of our party was set to leave about an hour after us and their trip took a little longer but they arrived without too much trouble. The final group was supposed to arrive by 11. They were stuck in much worse traffic and it took them about 4 hours to get there, I think. Apparently the big hold up was the vast number of vehicles that didn't have placards that thought they'd just drive out there regardless.

Anyway, we arrived a little before 9. 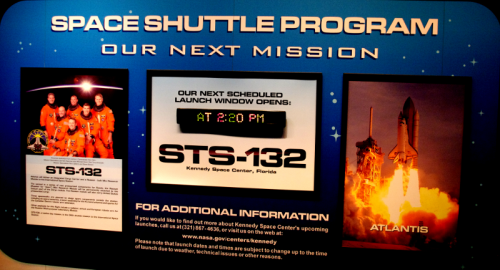 The Launch was scheduled for 2:20pm, so we had several hours to kill. We started by heading straight to the IMAX theater to watch the IMAX 3D Hubble Telescope story. Jess loved it. She really likes the Hubble pictures and they used some fancy techniques to create 3D models of the imagery and then fly you through it. It was pretty cool.

After the IMAX movie we met up with group 2 that was arriving. We also took the opportunity to apply ample amounts of sunscreen. Then it was time for lunch. We went to the Orbit Cafe and bought hamburgers and fries.

Once we were done with lunch we went and looked at the astronaut memorial and saw an alligator and a big turtle hanging out in the water. Then we wandered over to the Rocket Garden and read about some of the ridiculously large rockets that were built over the years.

It must have been around this time that the final group arrived and we went to find somewhere to try to watch the launch. It was crowded, to say the least. And it was insanely hot and also rather humid. All things that make for a great party on concrete. We had about an hour to wait. So we waited. We were able to see the screen they had set up so we had some status updates. Finally it was launch time. Everything was looking good and the 10-second final countdown began.

The engines fired up and the shuttle began to rise into the air. Being 7 miles away you don't hear much of anything for quite some time. But we watched it rise up over the treeline (no direct line of sight to the pad from the visitors' center). I had thought about renting a really fancy lens to try and get some sweet pictures. But decided against it and just snapped away with our dinky little 55mm lens.

The pictures are acceptable for remembering the event. Here's just after liftoff: 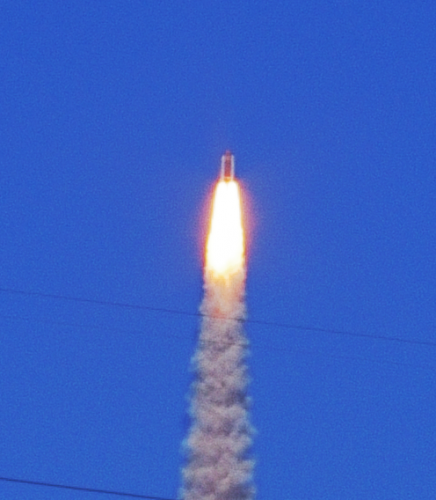 And the smoke plume around the time the solid rocket boosters were getting dropped off: 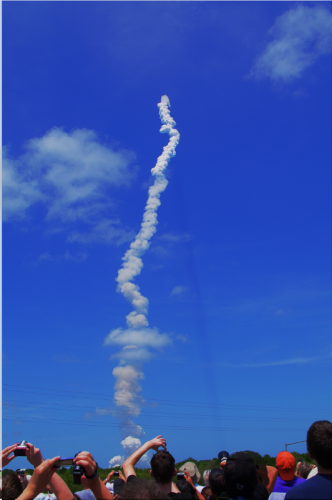 It was a mighty fun rumble when the sound wave finally reached us. After the shuttle was out of sight we went in to the Launch Status Center and watched some replays from the various NASA cameras. After some much needed air conditioning and sitting we went and saw the mock-up shuttle and then went to the Shuttle Launch Simulator. The SLS was pretty fun. I'd recommend it. The nice thing about the Visitors' Center is that the extras inside are included in the price. So it doesn't cost extra for the IMAX or the Launch Simulator.

After that we met up with the remaining other group and got ready to head back. One group left while we waited for Mike who would transfer to our vehicle. So we got some ice-cream cones and waited for him to checkout at the gift shop. We finally left about 30 minutes after the other group.

He checked his fancy Nexus One phone and found out how bad traffic was so we routed around the damage and had the GPS find us a new path away from the toll roads. We ended up one some little road with no phone service but also no traffic and cruised right along at 55-60 mph. We actually got home before any of the other groups. The first group to leave had left a couple of hours before us, but gave up and stopped for food. We thought it was pretty funny. It pays to travel with the nerds.