We wanted to do something to get out of the house this weekend. I found out about a program at Point Reyes National Seashore where twice a month they take a small group down to the lighthouse at night, give a little tour, and illuminate the lighthouse.

It sounded like fun. Then I found out that they were doing a sand sculpture contest the next day! We thought it'd be a fun way to spend the weekend. However, it being Labor Day weekend we couldn't find any way to spend the night anywhere near Point Reyes. Every campground was full, every motel, hotel, and inn. So we had to drop the full-weekend activity thing. But we did still get to go on Saturday and see the lighthouse. 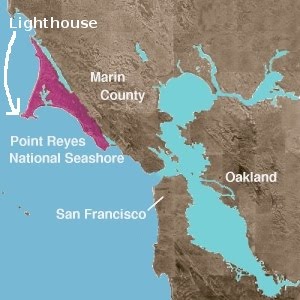 We packed up and headed out around 1. We drove out to San Anselmo and stopped at a Subway to get some sandwiches. We bought a bag of ice and some sodas and put it all in the cooler and continued on our way to the seashore. Once we made it to the National Seashore we still had to drive out to the lighthouse which is on a tip of land which is actually on the Pacific tectonic plate.

So we reached the park which has no entrance fee (yay!) and continued driving out towards the lighthouse.

On the way we stopped at one of the beaches; Jess even played in the icy water; which turned out to be dangerous due to the monsters: 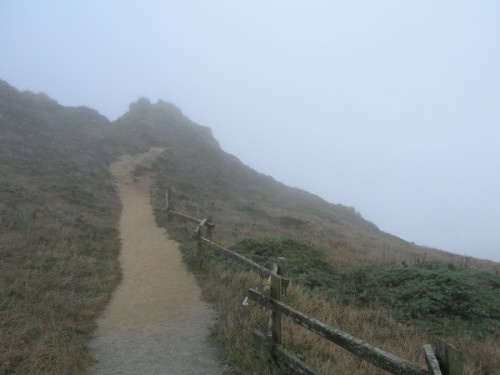 Once we finished playing at the beach (that is, once we got hungry) we finished our drive to the parking lot near the lighthouse. After our tasty, tasty dinner of Subway we still had some time, so we adventured out to the sea lion lookout point. By this time the fog was really starting to roll in and we were reminded of the Lord of the Rings when Sam and Frodo are wandering around in the fog.

There are supposed to be sea lions down below us. We couldn't see any, but we could hear some barking.

Finally it was time to head out to the lighthouse for the program. We saw some wildlife along the way, such as this deer: 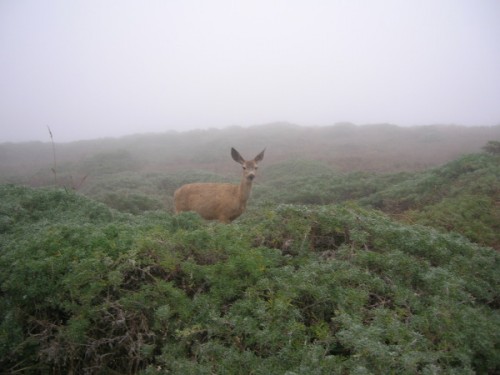 I also was able to get some pretty neat pictures: 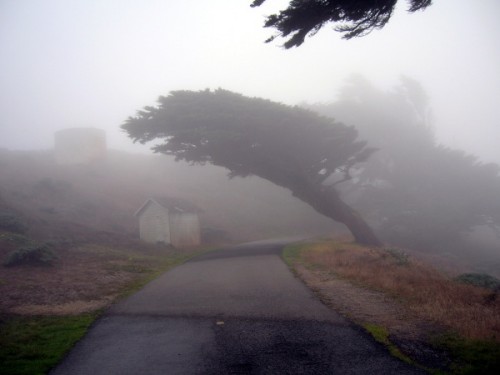 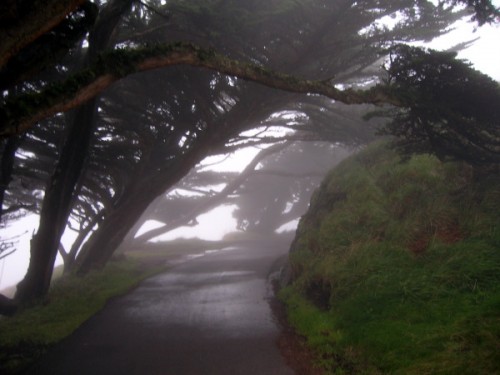 It was weird standing under the trees. The fog was so dense that it was condensing on the trees fast enough that it was actually raining beneath the branches.

We met up with the guide and walked down to the lighthouse (308 steps!). Here you can see the actual lighthouse and in the next picture is the currently used, automatic light which is operated by the US Coast Guard. 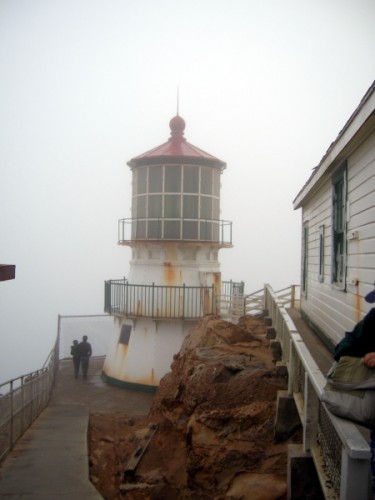 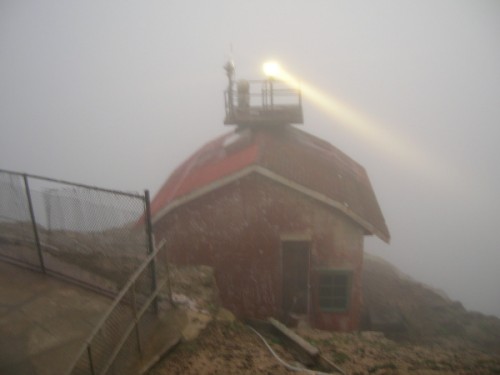 After some tour information it was finally dark so I got a fun picture of the automated light on our way into the lighthouse. 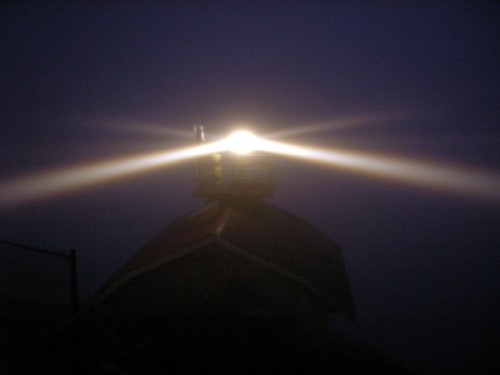 Inside you can see the inner workings of all the original gearwork that made the beams rotate. This is apparently a big deal, most historic lighthouses don't have the original gearwork. Even more impressive is that the gearwork still works too. They can't actually turn the structure at the moment though. Apparently there is a structural weakness in the roof and the rotating of the 6000 pound light structure could cause the roof to collapse. So they're working on getting funding to replace the roof (which requires removing the entire light structure piece by piece first). 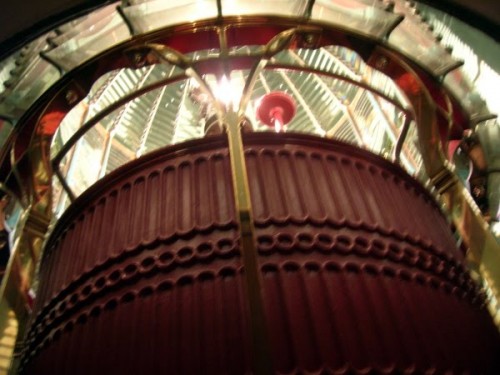 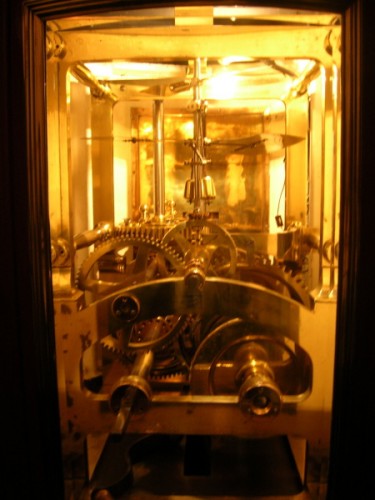 Then the guide removed the curtain from the light and we got to see it all lit up. Apparently they keep the light on all the time to keep the building dry and warm (to help protect the equipment), so they have a curtain up to keep it from blinding tourists and confusing people trying to view the actual light, I guess. 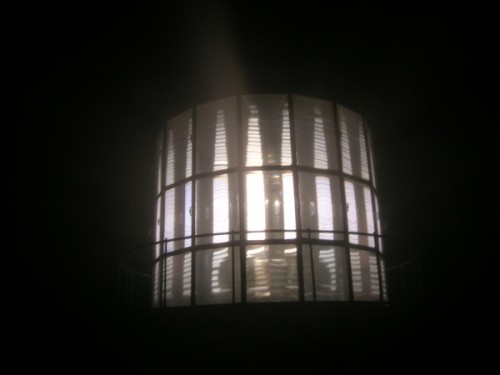 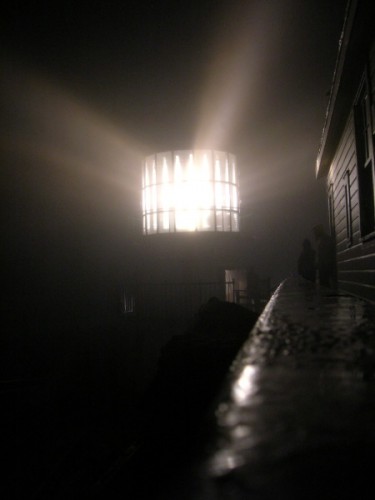 Then we got to walk back up the stairs of Mordor. It was dark and cold and our legs were tired. It was so foggy you couldn't see more than a small section at a time. 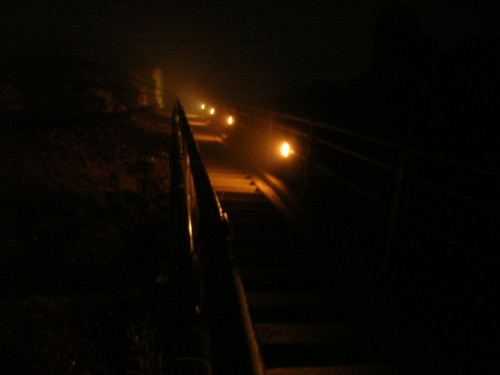 Then we got to get in the car and drive all the way back. It was foggy for about half of the drive through the park, so it was slow moving. We stopped for some deer that were crossing the road and several rabbits ran across in front of us. But we made it home. It was a lot of fun.