I finally got around to buying some more camera equipment. We have a tripod now! Nothing fancy; it was actually only $15 from B&H, but had great reviews (along the lines of great for the price, great for amateur photographers, etc). It actually is quite a decent piece of equipment for $15. I also bought a neutral density filter and a polarizer.

The neutral density filter is, essentially, a piece of uniformly darkened glass to reduce the amount of light coming into the camera. This allows you to have more control over your exposure when working in very bright lighting (like direct sunlight) when you would otherwise be forced into a very fast shutter speed.

The polarizer is, well, a polarizer. Like polarized sunglasses. It reduces the amount of light entering the camera by only allowing light with a specific polarization through. This lets you do things like minimize/remove reflections off of glass and water. It also tends to result in more vibrant skies.

Anyway, so those arrived on Friday and I wanted to play with them a little. So I thought it might be fun to go to a highway overpass to take some longer-exposure pictures where, though sunny, the cars mostly disappear. It was also blazing hot in the mid-to-upper 90s and Jess wasn't too excited at the prospect. I told her it would be interesting because I bet it wouldn't take long for the police to show up and bother us.

So we drove out to the overpass and I set up the camera and took some sample shots. After 10 minutes I was done and starting to pack up. It was then, while I was breaking down the tripod, that the police officer pulled up to ask us what we were doing. Luckily he was nice about it (probably partly due to clearly seeing that we weren't up to any trouble), and suggested we find another place to take pictures. Apparently they had received calls from concerned motorists. I guess someone on an overpass with a camera is just too strange for people to fathom and therefore it must be something suspicious.

Anyway, here are the pictures I took to give a basic idea of what we can do with these new fun tools. 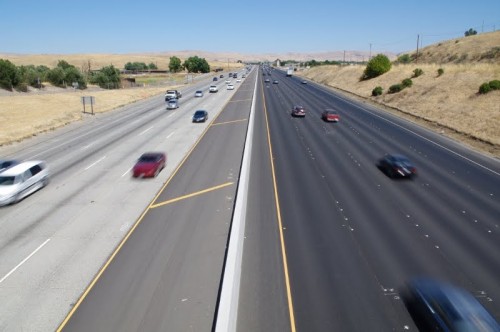 When we add the polarizer we see that the sky is richer. ISO 100, f/22, but the shutter time lengthened to 1/10 of a second (which is noticeable in the further blurring of the cars): 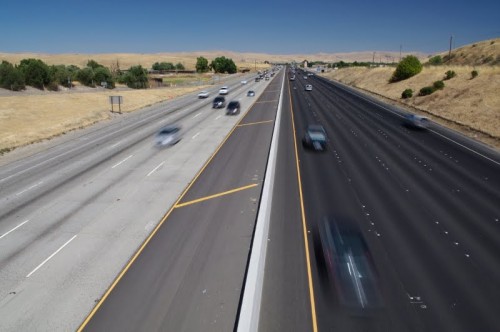 Next we add the neutral density filter (and the polarizer) to really cut down the light. Again ISO 100 and f/22 aperture. But now the shutter time is 1 full second. Notice how the cars are almost completely gone from the scene except as they become more distant (where they don't move very far per unit time in relation to the image). 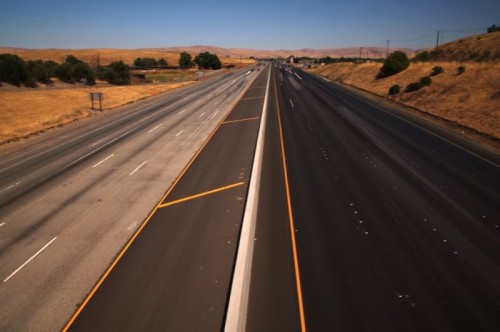 One thought on “New Camera Equipment”