Jess' car has a terminal case of busted transmission.  The cost of replacing the transmission is more than the car would be worth once installed.  So we're probably not going to do that.  It's kind of too bad since her car only has ~50k miles; but it is 14 years old.

I was having trouble falling asleep last night partly because a song was stuck in my head.

This is how I pictured my mind looking last night while lying in bed:

There was just the one stupid muppet sitting in the corner singing at the top of his lungs while the rest of me was trying to sleep.  It was pretty funny to think about though.

I realize this isn't very democratic of me, but honestly, I'm just tired of being outraged.

I was outraged when 455 members of Congress and President Bush passed the PATRIOT Act and signed it into law at the end of October 2001.

I was outraged when, despite the world's largest anti-war demonstrations, and based on a series of falsified information, Bush invaded Iraq in March 2003.

I was outraged when Bush was caught illegally authorizing warrant-less wiretapping from 2002-2005.

I was outraged when, in response, Congress (including then-Senator Barack Obama, despite having campaigned against it) simply passed a new law stating that warrants weren't needed for wiretaps so long as someone could say it was somehow related to terrorism.  And stating that everyone involved in the illegal warrant-less wiretapping program would be granted retroactive immunity for their illegal activities.

I was outraged when the TSA decided that it was okay to take and store nude pictures of airline passengers.

I was outraged when the TSA lied over and over and over again about the capabilities and refused to allow any independent organization to examine potential health risks of the scanners.

I was outraged when the TSA decided they would perform highly invasive pat-down procedures in what only appears to be an attempt to discourage people from opting out of the scanners.

I was outraged when the TSA began running checkpoints at bus stations, train stations, and highways.

I was outraged when it was discovered that President Bush had authorized the permanent imprisonment without trial of pretty much anyone the military felt like picking up (including U.S. citizens).

I was outraged when it was discovered that President Bush authorized the use of torture (and here) on prisoners of war and attempted to side-step the Geneva Conventions by calling it "enhanced interrogation techniques" and them "enemy combatants" (including U.S. citizens).

I was outraged when President Obama redefined due process to exclude the Judicial Branch and began assassinating U.S. citizens.

So please forgive me when I hear about wide-spread dragnet surveillance of U.S. Citizens and I just can't seem to muster the energy to continue to be outraged.

I've expressed my discontent with the above practices.  I've written letters to my Congressional Representatives and the President.  I've voted for third-party politicians (none of whom win, of course).  And I've donated money to the Electronic Frontier Foundation (EFF) and the Electronic Privacy Information Center (EPIC).

I've tried to share my opinions in a reasonable and rational way, but it makes no difference when apparently, millions upon millions of people think these programs are a good thing because "I'm a good guy so it won't affect me" and "whatever keeps us safe from terrorists is A-OK."

It also doesn't help that about half the people that also dislike this crap think the best response is to buy more guns, but won't bother to do anything else.  And more than half of those people think electing Republicans is the solution!

Let's not pretend this is a partisan problem.  But if that's too much, at least try to look far enough ahead to realize that any power you allow "your" party to have today will also be wielded by "their" party within 10 years.

I've been working on a new project recently.

It started with the goal of a photography gallery website where I could put my pictures and allow people to self-service buy prints/canvases/etc. through one of the many companies that sell such things.

I found a promising option, but it turned out to not be as helpful as I had hoped.  They wanted me to sign up with a payment processing company, file for a state tax identification number, etc, etc.  Way more effort than I wanted to go through.

Then I found another option, but, on top of the cut they take for each sale they also want $30 a year, which I don't really feel like paying.

So I took another tactic: I created a photography gallery website and licensed my pictures under the Creative Commons Attribution-NonCommercial-ShareAlike 3.0 Unported License.  It's not nearly as complicated as it sounds.  It essentially means you can do just about anything you want with the photos except use them commercially so long you attribute them to me as the copyright owner.

So anyone is free to have prints or canvases or whatever made from the photos. 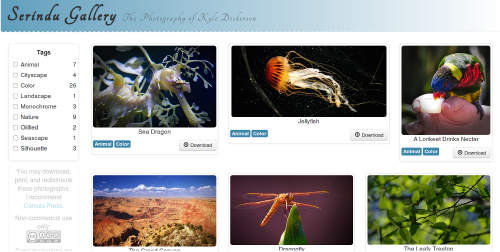 Serindu is just a name I made up years ago for an online game, it doesn't mean anything, I just like the way it flows.