Megan and Chad came to visit for the evening on Tuesday.  So Heather got to meet her cousin Charlie.  Believe it or not, Charlie is 6 weeks younger than Heather. 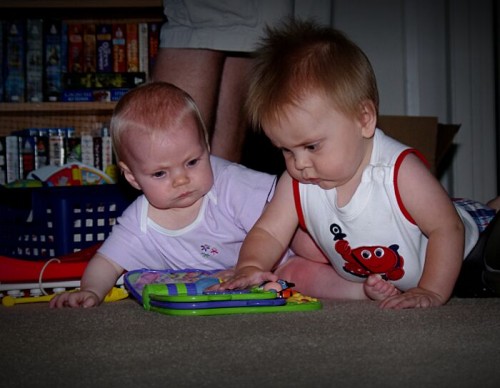 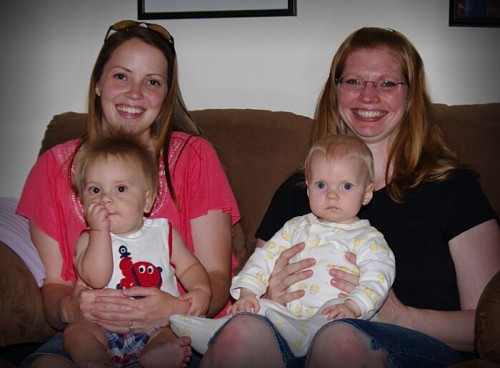 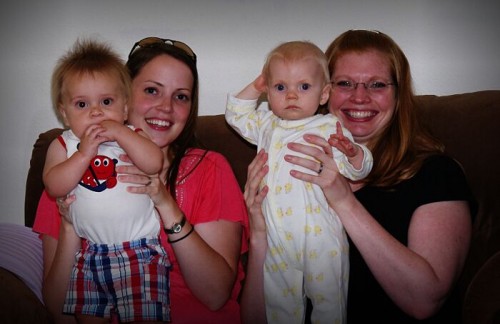 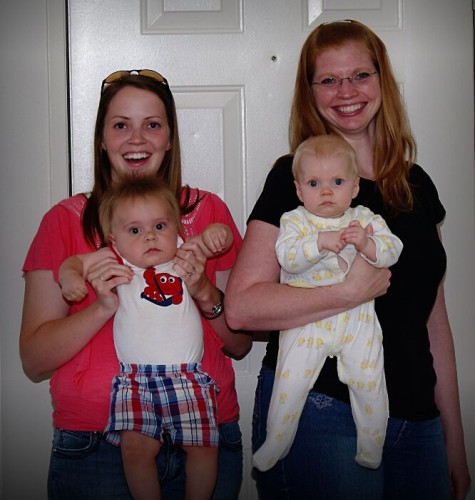 Just sticking this here for the rest of the Internet to benefit from.

I was rebuilding the HTPC with an updated OS and needed to get LIRC working again for my remote using the original XBox DVD dongle connected via USB.

I found this post which describes the process of building and using the lirc_xbox kernel module.  Which worked fine in XBMCBuntu (based on Ubuntu 11.10).  But when I tried to follow the instruction in Linux Mint 13 XFCE I got the error "E: Unable to find a source package for lirc" when attempting the line "sudo apt-get build-dep lirc".

I worked around the problem by running the same command on my laptop running Ubuntu 12.04 which gave me the correct list of dependencies:

I used that list in a "sudo apt-get install [long list of package names]" and was able to successfully get the build dependencies installed and follow the rest of Mr. Plow's instructions and get my remote working properly.

Since I saw that a few other people were having the same issue, I thought I'd post this in case anyone else gets stuck on the problem.

Heather finally got a long-desired wish; she got to touch the laptop.  She was ecstatic. 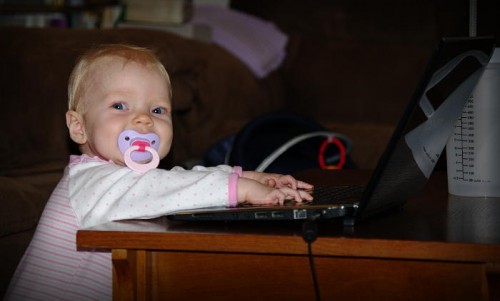 Maybe it's my imagination, but it really seems like she caught on to how I type and kind of, sort of tried to make her hands work the same way.  She would occasionally stop mashing keys and gently slide her fingers across the touchpad.  She also discovered the button that makes the menu pop up and disappear and she spent a bit of time pressing it repeatedly. 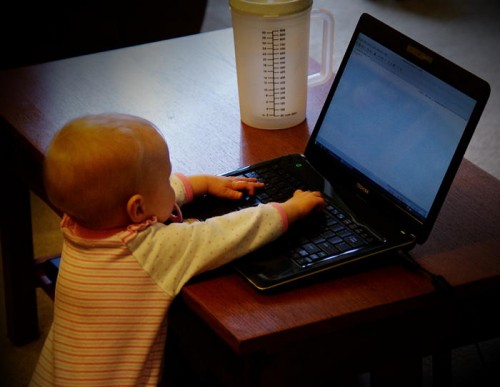 Since we've entered summer our electricity rate tiers have switched to the summer levels.  This means that the lower (cheaper) tiers are smaller so you start running into the much more expensive tiers sooner.  Tiers 1 and 2 are both pretty cheap, 13 and 15 cents per kWh, but tier 3 jumps to 30 cents per kWh.  So whenever possible we try to avoid landing in tier 3.

A while back Mom gave me a Kill-A-Watt meter.  Our electricity bill informs us that we're consistently using substantially more electricity than "similar homes in your area."  Which seemed odd since we don't obviously waste energy.  So I finally got around to checking on our electronics to find out what's guzzling our energy.

Jess has an old stereo thing that we use to listen to music when going to bed.  I discovered that this stereo was drawing ~18 watts regardless of what it was doing, 24 hours a day, 7 days a week.  So just having this stereo plugged in was costing us somewhere between $20 and $45 a year depending on the tier.

I have a desktop computer which I use as a file server and media center (via XBMC).  It holds all of our DVDs so that the actual DVDs sit in a box somewhere out of the way.  It also holds all of our music files and I use it to download various things via bittorrent (Linux ISOs, games purchased via the Humble Bundle, perfectly legal things, of course).  Thus the computer was usually on 24/7 also.

So I was rather shocked and appalled to discover that it was drawing ~106 watts when running.  Keeping that machine on was costing us ~$100-$200 a year!  So the first thing I did was dig into configuration options and disconnect unused components.  Via this route I was able to bring its energy usage down to about 80 watts.  Better, but not great.

Enter the Logitech Squeezebox Radio and the SheevaPlug. 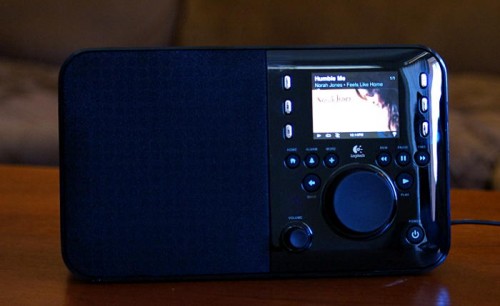 The Squeezebox Radio was something I've wanted for a little while.  It's a nifty device and the very low power usage was just a nice bonus.  It's, essentially, a music streaming device with built-in speaker and wireless network connection.  So you just plug it in and you can listen to Internet radio stations, connect to a Pandora account (or most other music streaming services), and play music from a local server via the freely available Logitech Media Server.  Something I like about it is that all the software is open source and they don't make any attempt at locking down the software or hardware.

Anyway, I received the Squeezebox Radio for my birthday this year.  Part of its job was going to replace Jess' old stereo system.  It's working great at that task and takes up less than a third of the space.  It's small (smaller than I expected) and easy to move so Jess often moves it to the living room during the day, into the bathroom for Heather's bathtime, etc.

The Squeezebox Radio draws ~2.0 watts when running (~2.2 watts when the screen is on).  So that's a big win over the stereo drawing 18 watts.  But it also contributes in savings in other ways.  Instead of running the full blown stereo system in the living room for music Jess uses the Squeezebox Radio, so that's going to count for something.

Overall I am very pleased with the Squeezebox Radio.

The Squeezebox Radio spends much of its time streaming music locally from the desktop (using the mentioned media server software).  And the computer was the big power hog.  So let's address that now. 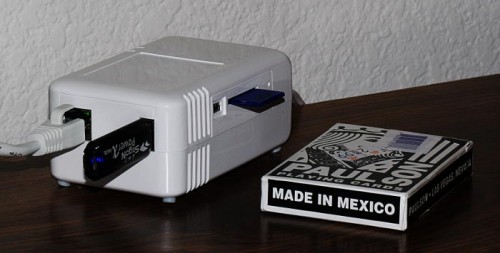 To try and reduce the power usage of the computer I spent some time researching low-power computing options.  I researched building an Intel Atom based machine, an AMD Fusion based machine, a dedicated NAS device, and a few other options.  But based on those systems it looked like I was going to get a lot more power than I needed and still be pulling 20-30 watts.

I then turned my attention to the Plug Computer scene.  Plug computers are designed to be cheap, low power, plugged in somewhere out of the way, and mostly forgotten. They have a vibrant community built around them.

There are several plug computers to choose from.  I went with the SheevaPlug because it has a long history with many success stories and guides.  Its age means it's a little less capable than some of the other offerings, but it looked like it would do what I needed just fine.

I used the 4 GB card to install the operating system (Debian Linux) and other necessary software (like the Logitech Media Server, Transmission [a bittorrent client], etc.).

The 64 GB USB flash drive is holding all the data I need.  It has our music library, backup files from the Board (the Board gets backed up nightly, previously to my desktop, now to the SheevaPlug), and any currently active torrent files.

Maybe some of the other plug computers are different, but setting up a SheevaPlug isn't exactly for the novice.  I had to cobble together bits and pieces from various guides in order to get everything working correctly.  It requires a working knowledge of Linux, a comfortable familiarity with command lines and a basic understanding of memory addressing (well, if you want to have any idea what the commands you're typing do, that is).

Here are the main resources I used:
http://www.cyrius.com/debian/kirkwood/sheevaplug/
http://www.cyrius.com/debian/kirkwood/sheevaplug/install.html
http://plug.noloop.net/sheevaplug-hacks/installing-debian/
http://wiki.slimdevices.com/index.php/SheevaPlug_Installation_guide
http://d-i.debian.org/daily-images/armel/20120705-08:35/kirkwood/netboot/marvell/sheevaplug/ (for the latest Debian installer images)
I also needed some decent Google skills to solve various issues along the way.

The SheevaPlug is up and running smoothly now.  Running full tilt it draws about 3.5 watts.  So the Squeezebox Radio and SheevaPlug together use about 6 watts compared to the ~125 watts previously needed for the desktop and stereo.  So over the course of 1 year this set up will save us somewhere between $120 and $200 in electricity.  The SheevaPlug costs $99, so it will pay for itself in a year and that's ignoring the reduced cooling costs.

Jess gave Heather some cut-up plums.  She really enjoyed them and made a royal mess.  (Sorry for the shaky camera work, I cut it to 17 seconds to avoid the most nauseating part when I start walking to get closer to her.)

She was so pleased with herself.  Also, she loves the camera.  She's a complete ham. 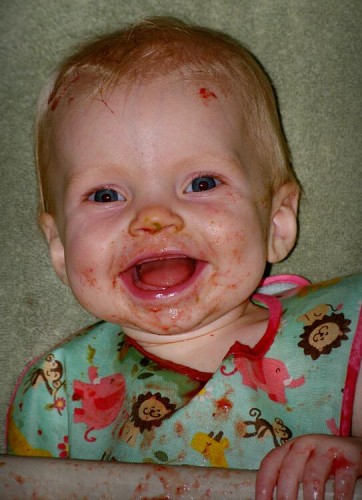 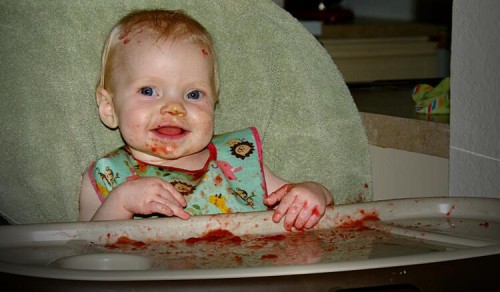 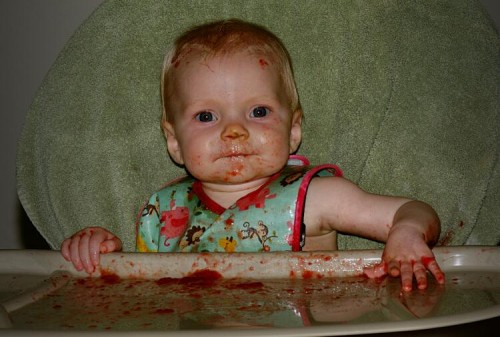 This is her mugshot from the incident: 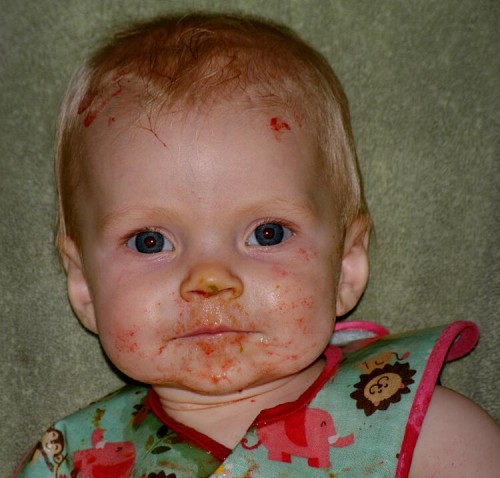 "Your charges will never stick!  I'll be back on the streets by tomorrow!"