Heather is doing soccer again this year on Saturday mornings.  This week was her first week and it was hot.  Soccer starts at 10:50am and it was already over 90 degrees and climbing.  But she stayed hydrated and I used the time to work on my action photography skills.

It's interesting how a small change in camera settings can result in a dramatic change in image presentation.

I started with the shutter set to 1/100th of a second, which captured images like this: 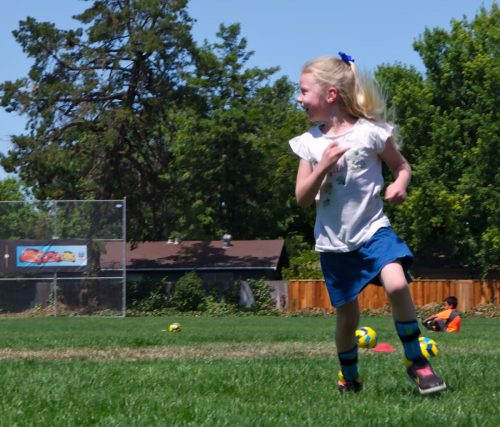 The scene is representative, and fairly sharp.  You can see some motion in her hands and feet, but overall it is a static image.

Stretching the shutter to 1/25th of a second gives you a totally different result: 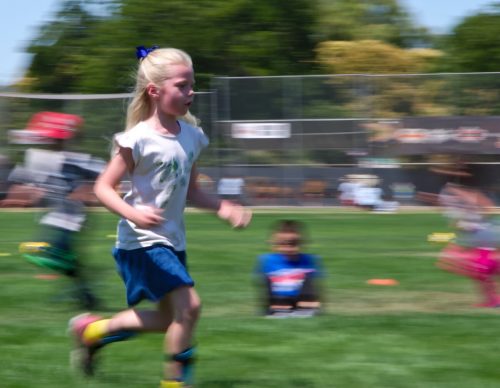 She's clearly moving, the background distractions are reduced via the motion blur and she becomes the uncontested focus of attention.  It's a much more interesting, dynamic image.

You can try using a wider aperture to reduce your depth of field to achieve similar separation between subject and background (which I've tried in the past), but that's tough in full sunlight.  You'll need filters to stop down the light and then capturing the subject in focus becomes difficult as your depth of field shrinks.

The trick here is to pan the camera with the subject throughout the shutter release.  It takes practice, but the results are worth it--which is why I've been practicing it.

Here's a couple more shots that came out decently.  In the first one, Heather is jumping over the pile of balls.  And in the second she is dribbling across the field. 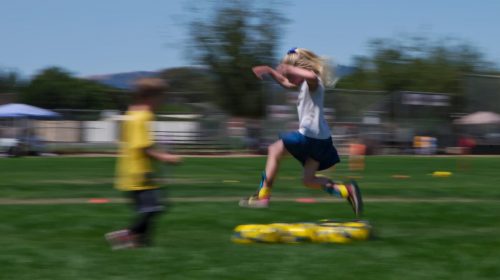 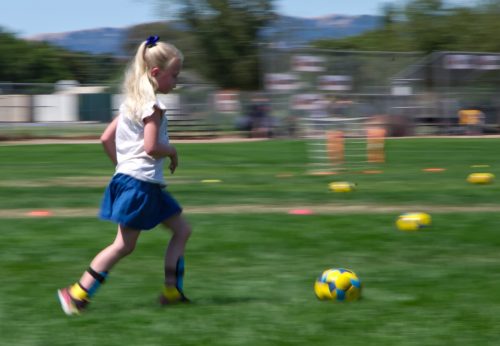 I got my 2007 Honda Civic LX in April 2007.  It's now just over ten years old and going strong.  I just passed 90,000 miles.  I fully expect it to keep going for another 10 years, though I may decide to swap it for an electric vehicle before it's totally worn out.

In 10 years I have had zero issues in terms of reliability or mechanical functionality.  It has received all services as scheduled by the built-in "Maintenance Minder" system.  It is on its third set of tires, its second set of brake pads, and its third battery (all counts include the factory-installed items). 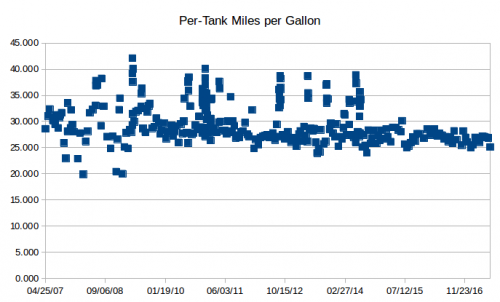 Efficiency has been consistent though it appears to be slowly dropping, but that might be a false interpretation of the data as, since we bought the Odyssey, the Civic no longer goes on long trips and has none of the up-ticks in efficiency gained from long highway traveling.

The lifetime efficiency is 29.86 miles-per-gallon (total miles traveled divided by total gallons of gas consumed; not the average of the per-tank efficiencies).

The amount of driving I've done with the Civic has been quite consistent over the years.  You can see some areas of rapid increase which signify long car trips driven over just a few days or weeks. 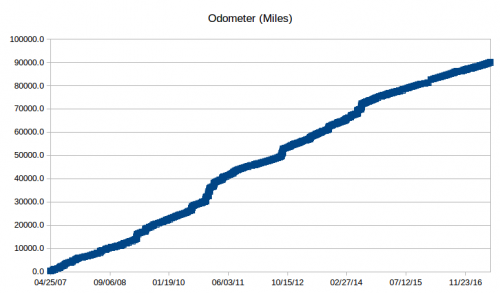 Overall, it has been a great car, though not without some minor annoyances.

A few of the LED segments on the speedometer display flicker, especially in hot weather.  Probably a weak piece of solder or something that becomes inconsistent in the heat.  Slightly annoying, but not a big deal.

The driver-seat height adjustment seems to slowly sink back down.  The height adjustment is a pneumatic system (as far as I can tell) that I think slowly leaks out the air pressure and causes the seat to drop back down to the bottom.  I usually pump it back up once a month or so and I only move it up a centimeter or two so it's not a big deal.

The driver-side window auto-retract system is overeager.  That's the system that prevents you from closing the window on an object when you use the "auto close" feature by pulling the switch all the way up.  The window will reach about an inch from closing and then retract back down.  Holding the switch overrides the auto-retract system.  So, again, slightly annoying, but not a big deal.

Honestly, those three things are the only functionality issues with the entire vehicle.  No mechanical issues, just minor annoyances.

Here I'm excluding recall work which could have affected the vehicle's reliability/safety, but was corrected for free and a priori to any incident.  The only particularly notable ones have been the possibly faulty O-ring on a speed sensor which may cause wheel failure and the faulty airbag inflater (part of the Takata recalls).  Both of which were corrected without issue.

The biggest problem with the car has been paint failure.  Several years ago Honda issued a voluntary recall due to an identified issue with paint longevity, but I misread the notice and missed the window to have them pay for some repainting.  Which may be somewhat moot.  The recall was for paint failure on the hood, roof, and trunk--which I had in great quantity--but I also had paint failure on the door panels and fenders.  I'm sure part of the problem was my not regularly cleaning and waxing the car, but even so, the paint should have held up better (which Honda admits).

In anticipation of owning the Civic for another 10 years I decided to get it repainted to both protect the metal and so it doesn't look terrible.

The first picture does not do a good job of exposing the differences from before (top) to after (bottom): 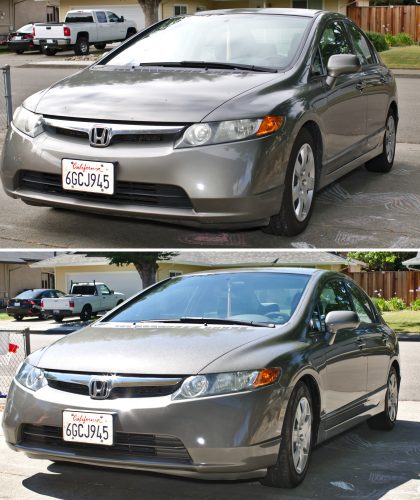 But once we start looking at the details it becomes obvious.  Left is before, right is after.

Top is before (obviously), bottom is after: 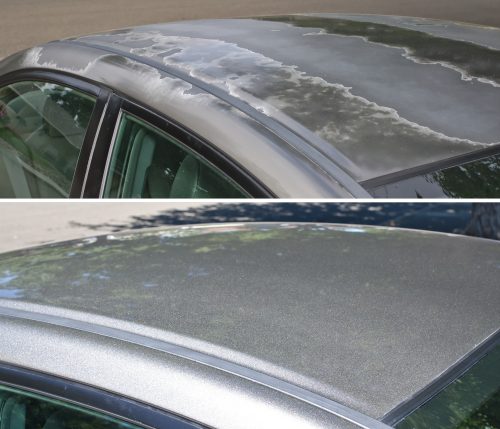 Here's to another 10 years!