It's Halloween! So we finally got around to carving our pumpkin. Well, okay, Kyle did the carving—while talking on the phone, no less. But I took pictures! So here ya go: 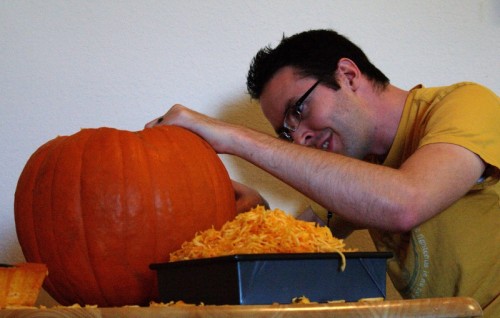 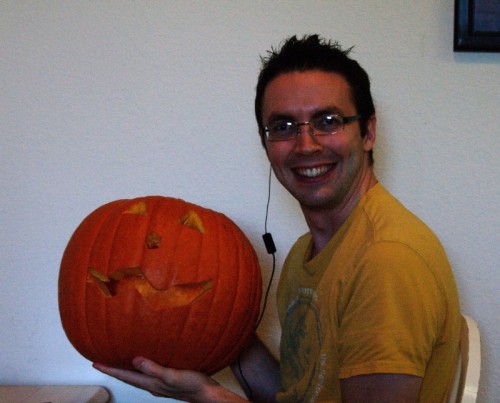 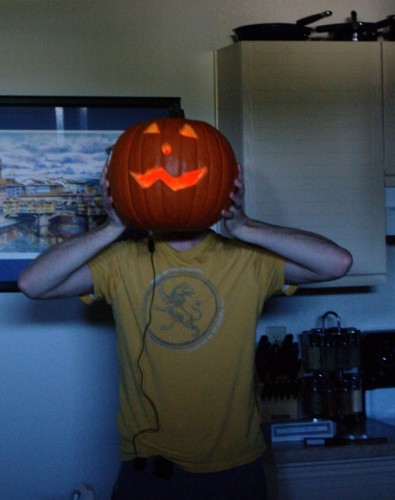 Spooky, am I right?

This one had me stumped at first. Certain tax changes were agreed upon between the legislature and the governor in 2008. These changes included various ways for corporations to finagle their tax burdens. One method being to shift net-operating-losses to previous tax years and get refunds, another being to choose which formula gets used to calculate their taxes (however they want from year to year). Proposition 24 is to repeal those changes before they go into effect and keep the tax law as it was in 2009.

The analysis provided by the state didn't give me any obvious arguments for or against. It ends up in the realm of nuanced business accounting. So I was having a hard time trying to form an opinion on the matter. The paid-for arguments were both sensationalist and lacking any real foundational evidence, so they were of no help.

The next step then, is to follow the money. And here is where the decision became easy.

The following data comes from ballotpedia.org.

In favor of proposition 24 means repealing the new tax laws which created more flexibility in corporations' tax burden. This side has raised over $13 million with donations from such groups as the California Teachers Association, America's Families First, National Education Association, Alliance for a Better California, and the California School Employees Association.

Against proposition 24 means keeping the new tax laws. This side has raised over $14 million with donations from such groups as Viacom, Cisco, Time Warner, Disney, Genentech, FOX, CBS, General Electric, DirecTV, and Pfizer.

That pretty much sealed my vote. If it's worth over $1 million a piece to these companies then I can only assume it's because they each intend to benefit by more than that. And my experience is that the companies on that list (and pretty much all companies) have never sought to reduce their prices and help out their customers simply because they ended up with extra cash in their pockets.

I need to get moving on finishing up these posts. 4 more propositions to do, and then I still need to actually look at candidates.

Prop 23 is an attempt to indefinitely postpone implementing the air pollution control law enacted in 2006. The idea is that companies won't need to worry about changing their environmental impact until unemployment drops below 5.5% for at least 4 straight quarters.

At face value it might seem like a reasonable position if you believe that allowing companies to pollute is an effective way to create jobs. However, the secret exposed by the state-provided analysis is that since 1970 there has only been ~30 quarters of unemployment below 5.5% which occurred during 3 separate time periods separated by several years each (cumulatively, ~18% of the quarters since 1970).

Had they put forth the idea of postponing until unemployment dropped below the average of the last 40 years (which appears to be around 7.5-8.0%) maybe we'd have something to talk about. But this just looks like big companies trying to make an end run around the law.

It seems like every time there are new regulations on an industry companies within that industry cry about how it's going to destroy them. Yet, every time, they seem to find a new way to make record profits within 5 years. I'm not buying the idea that these air pollution control laws are going to destroy any industries. I'm quite confident they'll find ways of abiding by the new regulations and still be profitable. Not only keeping the companies wealthy, but also providing cleaner air for everyone.

I plan to vote against proposition 23.

NPR has an exclusive article about the American Legislative Exchange Council (ALEC) and how it shapes legislation across the nation. ALEC is a membership organization. Legislators pay $50 per year, corporations pay upwards of $20,000 per year (totaling ~$6 billion a year). They hold all-expenses-paid conferences where corporations and legislators get together and "discuss" laws. While ALEC is paying for the conferences you can see from the membership fee distribution that it's really corporations footing the bill.

Part 1 talks about how the text of the AZ immigration law was essentially identical to a bill written during an ALEC conference in association with private prison industry representatives.

You may be thinking, okay it's a lobbying group, nothing particularly unusual about that. But that's exactly the catch. ALEC and its members are incredibly careful to make sure you don't call it a lobbying group. Because lobbyists have all sorts of regulations they have to follow.

Here are some priceless quotes:

[Michael] Hough works for ALEC, but he's also running for state delegate in Maryland, and if elected says he plans to support a similar bill to Arizona's law.

Asked if the private companies usually get to write model bills for the legislators, Hough said, "Yeah, that's the way it's set up. It's a public-private partnership. We believe both sides, businesses and lawmakers should be at the same table, together."

Is it lobbying when private corporations pay money to sit in a room with state lawmakers to draft legislation that they then introduce back home? [Michael] Bowman, a former lobbyist, says, "No, because we're not advocating any positions. We don't tell members to take these bills. We just expose best practices. All we're really doing is developing policies that are in model bill form."

So, one representative from ALEC, Hough, says it's normal for corporations to write the bills. But another ALEC rep, Bowman, says they don't advocate any particular position. The corporations just present their viewpoints in the form of bills that could be passed.

These corporations, out of the goodness of their hearts, are willing to pay tens of thousands of dollars a year to get together with legislators just to have neutral discussions of policy. Surely they wouldn't dare push for a particular position or law that might benefit their company.

ALEC holds conferences which include baseball games, golf tournaments, parties, and entertainment for children. None of which has to be reported by the legislators as corporate gifts. And indeed, not a single participating legislator in Arizona reported any of these as corporate gifts, they reported receiving benefits in excess of $500 from ALEC.

Why not? Well, they're not being paid for by corporations, they're being paid for by ALEC. And, ALEC isn't really paying for it, the legislators are being charged, but they all, conveniently, receive so-called "scholarships" to cover their costs.

"It's not lobbying, it's education!" is the claim from ALEC. Well guess what. In computer science we have educational conferences too. Who pays for them? All the people that want to attend and learn. We pay for our own lodging, food, transportation, and registration fees. And if Microsoft were to come along and say "we're holding a conference, all expenses paid, here's your plane ticket, see you next week" I could only assume that what I was about to attend was an advertising platform for Microsoft.

This one is described as "Prohibits the State from borrowing or taking funds used for transportation, redevelopment, or local government projects and services."

I will admit, I'm not really sure what the point of this proposition is. Based on my reading it seems that normally the State takes the luxury of borrowing funds collected by local governments during the part of the year when State revenue is low. But those funds have to be paid back.

So, as far as I can tell it's mainly a case of people who feel that the State is meddling in local affairs and don't like it. Of course, it seems like if this passes then suddenly the State needs to find another source of money or cut more services and this makes the existing budget less flexible.

The printed arguments, for and against, are both sensationalist drivel. So it's hard to get an idea of what's really behind this proposition.

At the moment I'm leaning towards "no."