Despite a rough start on my cake making, Jess' birthday went well this year.  I don't have a whole lot to say, so here are pictures: 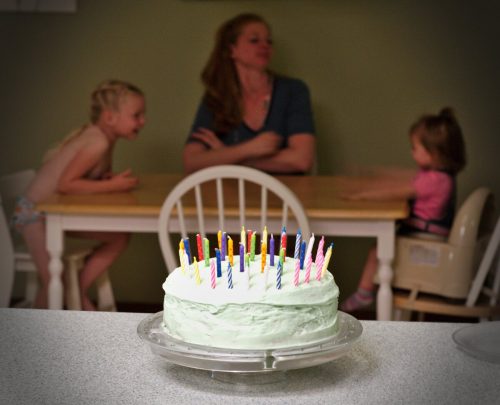 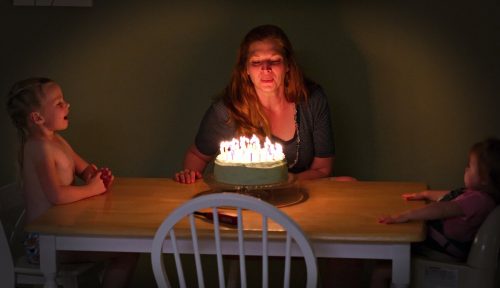 My children will not be obedient and I will never teach them to be obedient.  Obedience is to betray your own sense of morality and instead substitute someone else's.

I believe we have an obligation to act morally rather than obediently.  This is one of the fundamental issues that puts me at odds with LDS theology.  LDS theology defines morality as obedience.

For example, the Book of Mormon starts out with a story of Nephi being commanded by God to murder and rob a drunk man lying in the street in order to then go to the man's home and steal a book.  The LDS Church teaches that this was a great and noble act of obedience and we should all strive to be as obedient as Nephi.  The lesson is that we all must be willing to commit murder if we believe God is commanding us to do it.

Similarly with the story of Abraham and Isaac.  We are taught that we should be so obedient that we will murder our own children and this is adored as virtuous.

The LDS lessons on obedience range from disturbing, to completely nonsensical, to truly concerning.

One of the more disturbing lessons I've come across was given by Staheli of the Quorum of the 70 in the April 1998 General Conference:

While I have had my share of lessons on obedience during my life, one of the most memorable was taught to me as a young boy by my dog and my mother. When I was about eight years of age, my father brought home a puppy which I promptly named Spot. We became the greatest of pals as I tried to teach him a few tricks and obedience to my commands. He learned well, except he could not conquer an overwhelming desire to chase and bark at cars as they came down the dusty street by our home in our small southern Utah town. As hard as I tried, I could not break Spot of his bad habit. One day a neighbor came speeding by in his large truck. He knew Spot and he knew Spot’s bad habit. This time, just as Spot approached the truck in his usual aggressive manner, this man swerved toward Spot, running over him with the rear wheel of his truck.

With tears streaming down my face, I cradled Spot in my arms and ran to the house, calling to my mother and brother for help. As we washed the blood from his head, it soon became apparent that Spot’s disobedient act had dealt him a fatal blow. As the burial of Spot was completed and the tears dried, my mother then taught me one of the great lessons of life as she explained the principle of obedience and its application in my life. She made clear that seemingly small acts of disobedience can result in longer-term consequences of unhappiness, regrets, and even fatal results. --Staheli

The lesson here is clearly not that the neighbor who willfully and intentionally murdered his dog was at fault.  Nor was Staheli himself at fault though he was responsible for the dog's welfare.  It was dog's fault for being disobedient.  And if we're not obedient we might be murdered too.

Here's one example of a nonsensical lesson from a Young Women's lesson manual (manual 3, Chapter 25):

Explain that one of the primary aims of science is to discover additional laws. When scientists discover these higher laws and obey them, marvelous things can happen. The successful landing of men on the moon is an example of the importance of obedience. Men spent years concentrating on discovering and obeying the natural laws that governed gravity, jet propulsion, and other things. Their obedience resulted in the successful landing of a man on the moon. --YW Lesson Manual

The laws of physics are not something you can choose to obey or not.  The entire paragraph makes no sense in the context of trying to teach that obedience is a virtue.

And finally, the lesson that I find truly concerning and really highlights that in LDS theology there is no greater act than obedience.  In 1980, Ezra Taft Benson gave a talk, "The Fourteen Fundamentals in Following the Prophet" in which he quotes Marion G. Romney from the October 1960 General Conference:

I remember years ago when I was a bishop I had President Heber J. Grant talk to our ward. After the meeting I drove him home … Standing by me, he put his arm over my shoulder and said: "My boy, you always keep your eye on the President of the Church and if he ever tells you to do anything, and it is wrong, and you do it, the Lord will bless you for it." Then with a twinkle in his eye, he said, "But you don't need to worry. The Lord will never let his mouthpiece lead the people astray." --Marion Romney

There are two fundamental problems in this quote.  One is that the prophet is infallible.  If "the Lord will never let his mouthpiece lead the people astray" then the prophet must be infallible as far as leading the Church is concerned.  Which contradicts the "leaders are not infallible" explanation that is used whenever doctrine has to be revised.

But the truly concerning part of that quote is that we're told to obey the prophet even when he tells us to do things that are wrong.  That our own sense of morality and our own exercise of agency is so irrelevant that if the prophet tells us to murder our neighbors we need to be obedient and not question else "[we] become [our] own prophet. [We] decide what the Lord wants and what the Lord doesn’t want" (same source, N. Eldon Tanner).  And for some reason a God that granted us agency will find this not only acceptable but laudable.

I find that Galileo had a much more appropriate view on the matter:

I do not feel obliged to believe that the same God who has endowed us with sense, reason, and intellect has intended us to forego their use. --Galileo

Obedience has been used to drive people to great evil throughout history.  I don't want people learning obedience.  I don't want my children learning obedience.  Obedience is too easy to corrupt and can only be unblemished under the direction of a benevolent and infallible dictatorship.  Since the LDS Church readily admits that no mortal is infallible (despite teaching that the prophet cannot lead the Church astray) we should really be wary of the constant demand for obedience.

I will not teach my children obedience.  I will teach them morality.  And I do so with the recognition that morality is harder to teach than obedience.  Teaching obedience can be done with nothing more than fear.  Teaching morality requires teaching awareness, compassion, reasoning, justice, mercy, introspection, empathy, and self-confidence.  I will feel a failure as a parent if my children ever defend their actions by saying, "I was just doing what I was told."

LDS theology is that our purpose on Earth is to exercise our agency and learn to discern right from wrong.  Supposing that is accurate I have a hard time believing that when we die and stand to be judged that the correct answer to "Why did you act that way?" will be "Because you said so."