We ended up going with T-Mobile for several reasons. The main reason that they offer more minutes for the same price as all the other family plans that were available. The other reason is that they let you tack on unlimited data (internet access) for $10/month. Whereas the closest competitor is $30/month and if you want to use a device other than your phone they'll charge you $60/month. So, having my little Nokia n810 I thought that might be handy. Since they were also offering a 30-day trial of the data access I've been having fun trying it out. I've decided it's great if you're traveling a lot and want to stay connected. But rather unnecessary otherwise. So I'll probably cancel it and add it back on for $10/month when I do lots of traveling for the month (assuming I'll be able to actually do this).

So far I'm happy overall with the switch. It didn't go off without a hitch, but that's, sadly, to be expected. The first problem was that we wanted to keep our old numbers, but you're only allowed to do this if your name is on all the accounts. Since my name wasn't on my old account (being part of the family plan) I couldn't keep my number. And since we were putting the new plan in my name, Jess couldn't keep her number. But, that's probably for the best anyways, this way people who live here can call us from landlines without paying long distance.

The second problem was that they gave us phone numbers that weren't local to Livermore. Which was really stupid. So I had to call them up on this one. After getting sent in circles on their stupid menu system I got a hold of someone (thankfully their call centers are actually in the US and the workers speak intelligible English). They changed the numbers for us, but I was still annoyed when they acted like they were doing us a big favor by not charging $15 each line to change the number.

The phones themselves are good and pretty much exactly what I was looking for. I searched for weeks before doing this to find phones that were good at being phones. We don't want phones that try to be a camera, music player, fish scaler, gourmet chef, and, oh, and maybe make calls too. We want phones that are phones first. I finally found the Motorola w490: 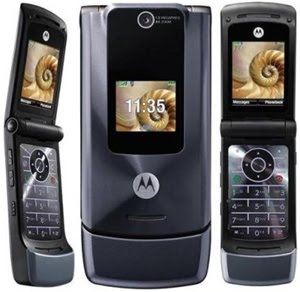 The review I found gave it 3 out of 5 stars and said something along the lines of, "It is good at making calls and has incredible battery life (8+ hours talk-time tested), but the music player isn't very good and the camera isn't very good." That sold me. I'm happily using my phone as a phone.

Another aspect of our plan that has made me happy is that T-Mobile isn't going out of their way to be obnoxious. The phone comes completely unlocked. You can add a microSD card for extra space. It charges through a standard miniUSB connector which you can charge from a socket or your computer (if you happen to have the proper connector), and you can transfer files over the connection or even use the phone as a modem. They don't stop you from loading your own songs to use as ringtones, they don't stop you from tethering your device via Bluetooth and transferring files or using the data connection. You've paid for the hardware and they let you do what you want with it. Very refreshing considering most companies (I'm looking at you, Verizon) still screw you over in this respect pretty badly.

Unfortunately, T-Mobile is still following all the other American companies and screwing you on text messages. I'd be perfectly happy to sign up for a 100 text a month plan to be split across our phones for $1/month (heck I'd even pay $1/month for 50 or even 25, it's still better than $.20 per message), but I'm not going to pay $5/month/phone for some ridiculous number of messages that neither of us is possibly going to use. So we'll live without text messages. Hopefully the FTC or DOJ or whoever it is will finish their investigation and rain down fines and penalties until this collusive practice ends.