The next day after Columbia, Mom and Dad were headed up to Idaho.  We went and visited Railtown 1897 State Historic Park and then Mercer Caverns. 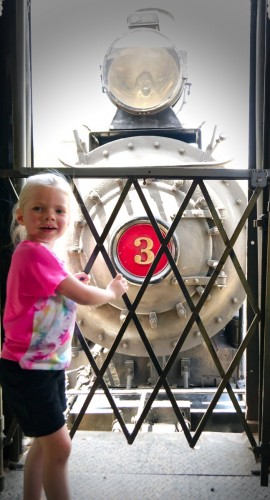 We arrived just in time to catch the 12:00 train.  It was hot.  If you can, you want to sit on one of the cars with open sides; the breeze keeps it much cooler than the cars with just open windows. 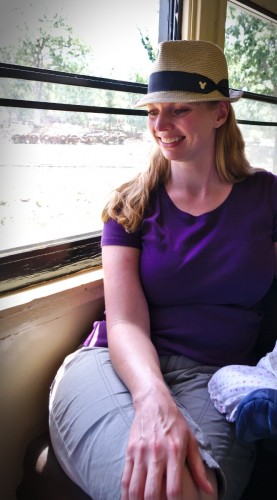 At the halfway point the train stops and the engine decouples and then hooks back up on the other side to take us back. 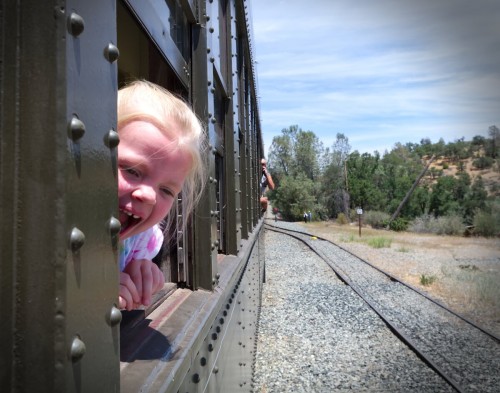 While that was happening all the kids were piled up at the end of the train watching.  I was standing at halfway back in the car to make room.  Then I hear Heather screaming for me.

As I work my way up to her I discover that she'd gotten her head stuck in the gate at the back of the car.  Before I can get to her a woman helped her get her head out.  Heather then turned to her, thinking it was me, and really lost it.  At that point I was only a step away though, so I picked her up and carried her off to try and calm down.

After she calmed down we went back to the end of the car to look out again.  The crowd had dispersed by this time so it was mostly just us and another little boy.  For unknown reasons Heather pushed the boy so I grabbed her arms to discuss why that was not acceptable during which she kicked him [sigh].  So I picked her up again and carried her off screaming.  That part was less than great.

It could have been more relaxing.  I would recommend against visiting when it's over 100 F out. 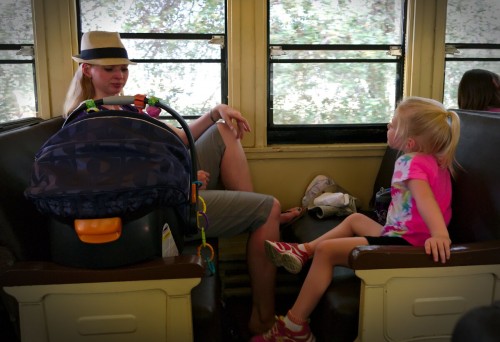 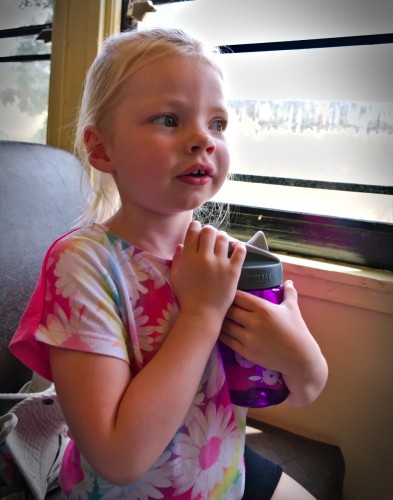 We got back in the van, bought some cold water, and headed off towards Mercer.  At least underground it would be cooler.

On our way there we crossed this bridge.  This sort of highlights California's water problem.  You can see where the water level is supposed to be and used to be.  The little pull-off here has a plaque commemorating this location as the location of one of the first ferry crossings for this water.  At the moment you'd have to work your way pretty far down the cliff to cross the water. 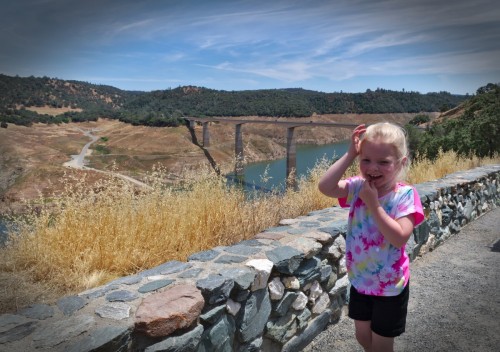 We stopped for lunch in Murphys, which we discovered is apparently a somewhat hoity-toity little town that was having some sort of festival so it was packed.  After contemplating driving back the opposite direction to find some less crowded food, we eventually decided to be adventurous and just go with it.  So we found a parking lot and loaded up the strollers.

We had been heading for the Murphys Grille, but then stumbled upon Peppermint Stick (which didn't sound like a restaurant when we saw it on the GPS receiver).  But they had food and ice-cream which, again, it being over 100 F sounded like a good idea.  We enjoyed some really tasty and plentiful burgers and shakes.

After lunch it was time to delve into the earth where it was blessedly 55 F.  We were concerned we might get chilly in shorts and t-shirts, but let me assure you, the tour is only long enough for the cool air to feel nice.  Heather did end up wearing her jacket, but we ended up just carrying our other jackets the whole time.

I didn't take the camera into the cavern as I was concerned I might end up needing to carry Heather, so I only have pictures from my phone, but the lack of light was mostly too difficult to get any pictures worth looking at.  But I did get this one near the entrance: 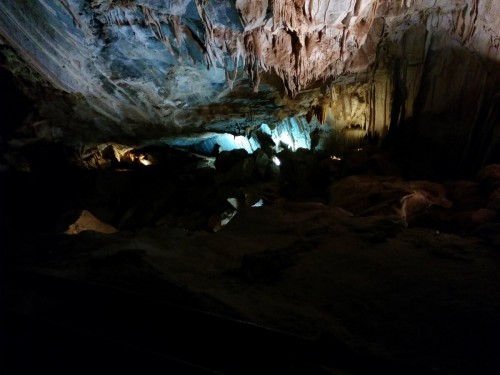 On the cavern tour Heather was a perfect little angel.  The heat seems to really affect her ability to concentrate and maintain her self-control.

After the cavern tour it was time to pile back in the van and head home.