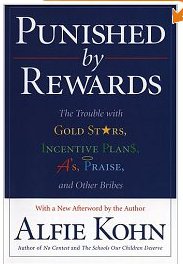 In Part 1 I discussed Kohn's argument for rewards/punishments creating self-centered individuals and how urging a focus on rewards/punishments can have unintended consequences by encouraging short-cutting the desired behavior in order to satisfy the requirements of receiving the reward or avoiding the punishment.

In Part 2 I discussed motivation and the interaction between it and rewards/punishments.

Here, in Part 3, I will go over Kohn's suggested alternatives to rewards and punishments.

If you have now bought in to the idea that rewards and punishments are not only ineffective but counter-productive, long term, (and even if you haven't) then you likely want to know what Kohn suggests as an alternative.

He starts with an important question, "What is your goal?"  If your goal is to simply elicit compliance with your demands then there may not be an alternative to rewards and punishment and you probably don't need one.  So the first question is, do you want blind obedience or internalization of principles?  Back in part 1 I asked you to consider the question of what is is you want your employee/student/child to achieve.  This is where it really matters.

When parents are asked what kind of people they want their children to become they usually respond with things along the lines of: caring, responsible, hard working, self reliant, upstanding, principled, etc.  Unfortunately, with the possible exception of "hard working," rewards/punishments will help develop none of these qualities.

Just think how disturbing it would be to witness a husband tell his wife, "If you have all the floors clean when I come home I'll bring you some flowers."  So why do we think it's fundamentally different when we turn around and say to a child, "If you pick up all your toys I'll give you some ice-cream."?  It seems clear that the lesson is that manipulation is not only acceptable, but desirable.

One piece of the alternative solution is to appeal to reason and empathy in our behavioral guidance (in so far as the situation permits).  "Because I said so" is one of the most useless phrases of parenting and almost universally breeds resentment.  It directly says that there isn't any meaningful reason to take this action other than I want you to and I'm in charge so you have to do as I say.  It comes with no influencing power except the threat of punishment for non-compliance.

Instead of threats or bribes, Kohn suggests explaining the reasoning behind a request.  A calm reasoned approach to help a person understand why they should do something.  As a manager telling your employees they'll be working late tonight is disrespectful.  Explaining to them that such-and-such needs to be done before tomorrow morning, and that you realize it's unpleasant to stay late, is less likely to result in disgruntled resentment (though it probably still won't make anyone happy).

Explaining to a student the utility of learning calculus is more effective (at least it was for me) than just saying it's part of the curriculum.  This idea really resonated with me because I always found a subject more interesting if I could see useful applications of it within my life.  Understanding that calculus was invented in order to accurately describe physics made it more interesting (especially when applied to specific problems).  Doing contrived problem set after contrived problem set of multi-variable equations while in college was not interesting.

For those wondering, yes, Alfie Kohn does have children.  He freely admits that it is hard to use his recommended approach.  It requires a lot of patience.  It is much less effort to simply bribe or threaten, but the research still stands that the long-term consequences will be negative.

"Working with" Rather than "Doing to"

One of Kohn's themes is the idea of approaching children with an attitude of "working with" rather than "doing to."  He suggests that at some point our relationship with our children needs to change from doing things to them to doing things with them (or working with them to solve problems).  When you have an infant you take them on a walk.  As they grow our mindset should change to going on a walk with them.  This is the fundamental shift behind the idea of working with rather than doing to.

To acknowledge that at some point the child is becoming an individual with their own ideas, emotions, and desires is to realize that doing things "to" them can be as disrespectful as doing things "to" another adult.  He suggests we can apply the three C's to help with this process: Content, Collaboration, Choice.  And I'll keep this brief, since we're running quite long now.

Kohn suggests that when a child makes a mistake we should try to work with them to find a way to make the situation right rather than punish.  Instead of bribing them to do what we want we should try to work with them to get the task done (in so far as the task permits).  With this approach a child is more likely to learn that they can come to you for help fixing something when they make a mistake instead of trying to hide from you to avoid punishment.  They can learn that you are there to help and not to bully.

This should be the opportunity for children to make real choices in their life.  This is not the idea of choices where we use the words "you chose" as a lead up to a punishment ("You chose to color on the wall, so you chose to go to your room.").  It is also not the idea of choices where we offer a couple of acceptable options so that we get what we want no matter the "choice."  This can even mean allowing children to make bad choices (when the results will hopefully present a learning scenario and not lead to permanent damage).

This is the process of letting children become autonomous.  In order to learn how to live their own life they need to be given the opportunity to make choices.  A lack of this opportunity sometimes manifests itself in complete disaster then the child finally leaves home to live their own life.  A sudden requirement of making choices can be disastrous to someone who hasn't had the opportunity to do so in an environment where it is easy to recover from bad choices.

Developing a self-awareness and autonomy can help children develop and uphold ethical and moral principles.  When they've been taught that they can and should think for themselves they'll be much more likely to stand up for the things they think and believe when challenged.  They'll also be less likely to accept outside influences because they will have learned the value of their own autonomy.

Due to length I've ignored most of the business applications that Kohn discusses.  They're also very interesting and Kohn dives into them fully in the book.

If you can't tell, I found the book very interesting, but I've done a weak and short job of presenting Kohn's ideas here.  If you found them intriguing I highly recommend you pick up the book and read through it yourself.  I hope to be able to apply Kohn's suggestions in my life.  I think it represents a better way of dealing with people, including children.  I don't want to control or manipulate my children because I hate being controlled and manipulated.  I do want to help them grow into responsible, caring, self-aware, principled adults.  And I realize it will be difficult to do so.

7 thoughts on “Book Discussion: Punished by Rewards (Part 3 - The Alternatives)”