A couple of weeks ago I was lamenting to Jess that we needed to _do_ something.  So on Friday the 15th she suggested I take the afternoon off from work and we go to the Oakland Zoo, so we did.  Heather had a blast, as she always does.  One of her favorite things to do is to hop across the "lily pads" in the kids area.  Which she did for like half an hour and made a friend with another little girl.  Then she lost her balance and stepped into the pond and soaked her shoe, sock, and pant leg.  Which is why she's only wearing one shoe in these pictures.

Her favorite thing to see was the zebras, but we also stopped to watch the lions, giraffes, camels, and elephants.  I had read somewhere that elephant sounds were used as the basis for the Tyrannosaurus Rex sounds in Jurassic park.  Well, while we were watching the elephants one of them made this low growling kind of noise which made me think of that tidbit because it was spot on.  It's apparently also true, a lot of other animals were used to (and usually heavily modified).

It was after the zebras that we headed for the children's area where Heather soaked her foot.  After that it was off to see the tortoises and lemurs.  Luckily, it was a cool day and the tortoises were lounging in their shelter with the heat lamps.  Luckily, I say, because at one point Heather took off running and climbed into the tortoise enclosure before I caught up with her (through one cable-fence and over a short wall; tortoises don't really need much to keep them in).  She only got one leg in before I grabbed her but she was ready to bolt.

After retrieving her we pretended to be tortoises:

And then we rode on a (fake, obviously) tortoise.

The zoo closes at 4 so we headed to as-seen-in-Up! Fentons for dinner and ice-cream: 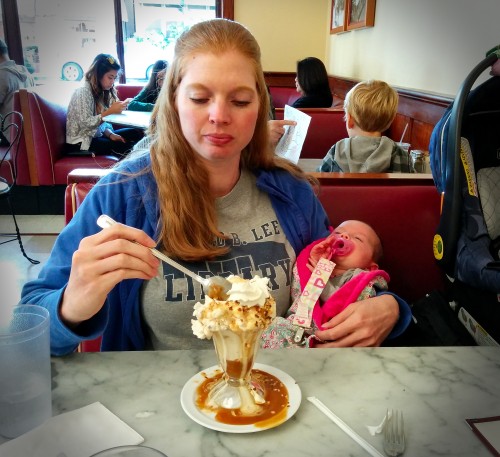 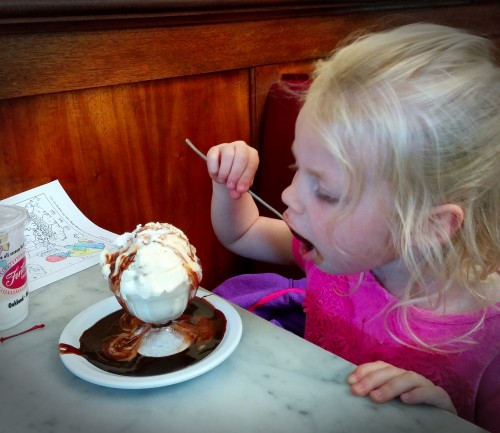 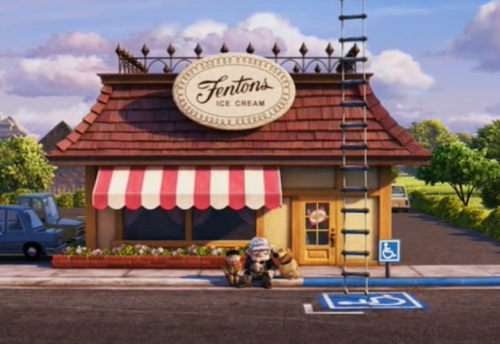 The movie makes it look like it's off by itself in the suburbs.  That's a lie.  The food was pretty good regardless, but a little pricey for what it was.