To celebrate Heather's birthday weekend, we went back up to Tilden Park to ride the train and carousel again. She'd really enjoyed it last time, so we thought it'd be a good treat.

Unfortunately, we sat too near the train engine and the loud whistle scared her to death. She cried the whole ride! 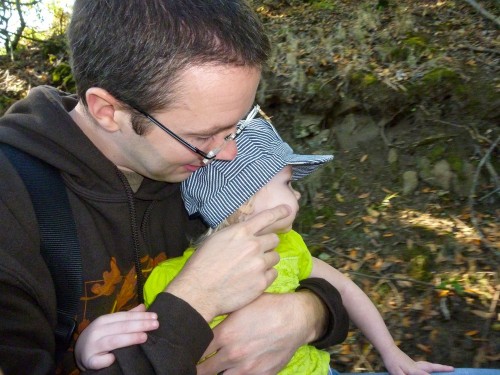 At least we got her a cute conductor's hat. 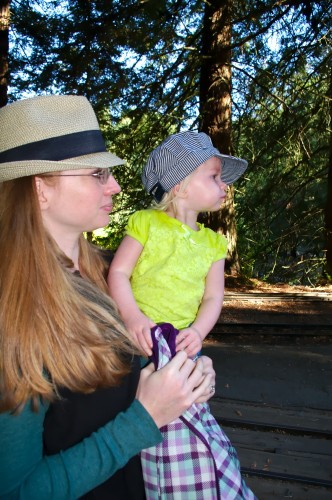 We had bought enough tickets to ride a few times, but Heather wasn't interested in that. We waited for a while, then got in the very last car, so we'd be as far from the whistle as possible. But as soon as we sat down, Heather jumped up and dragged us off. 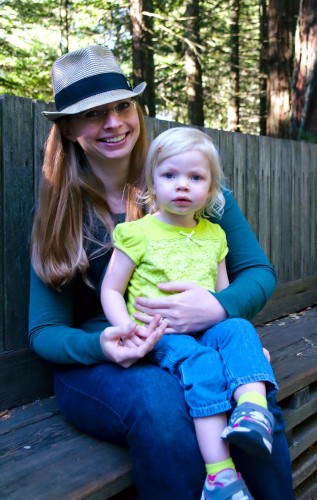 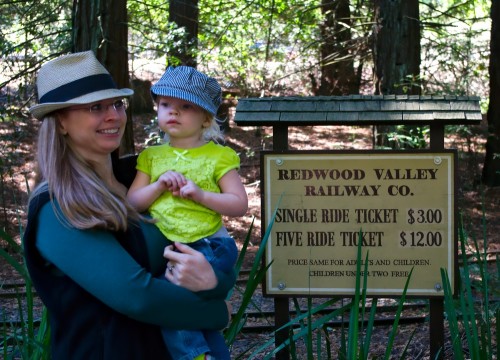 Basically, this sums up her feelings about the train: Run away! Run away! 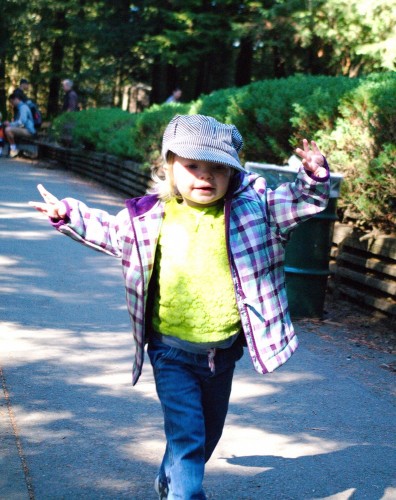 Well, we still had the carousel. We knew she'd love that. And she did like looking at it. But the actual riding part made her cry some more. [Sigh.] 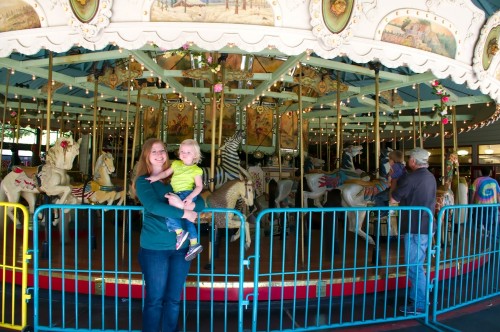 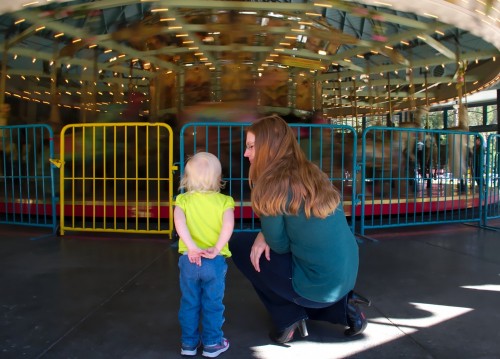 She was eventually happy sitting on one of those boring seats with me. I don't know what was going on with her.  But we pretty much felt like we'd ruined her birthday treat. 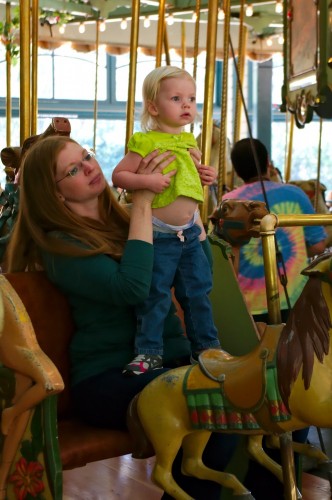 The day of her actual birthday, however, Kyle won by bringing balloons home for her. I saw him pull into the driveway, so I sent Heather to open the door for him. She lost her little mind with excitement! "Gaminoos at the door! Gaminoos at the door!" (For unknown reasons, she called balloons "gaminoos" until the day before yesterday. She's figured it out now, but I'm a little bit sad. It was so cute!)

For her birthday dinner, we had her favorites: hot dogs with ketchup, fries, and baked beans. Does it get any better? 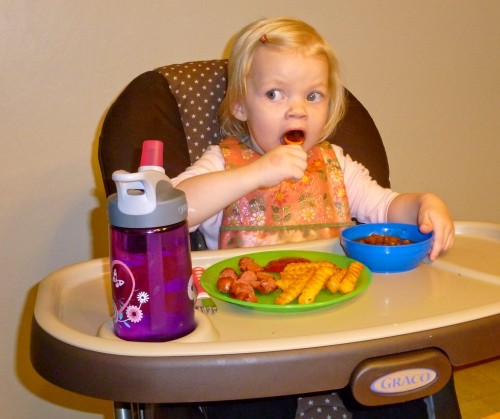 We managed to get both sets of grandparents on video chat to watch her open presents. 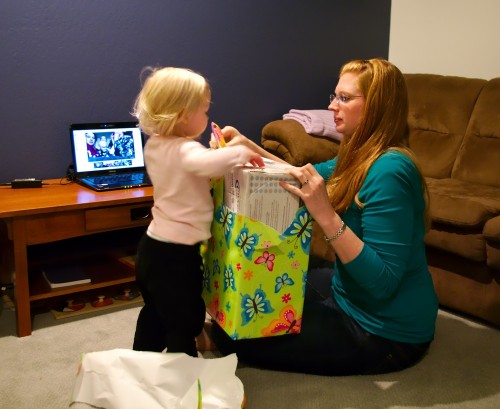 Sitting in her new booster seat, examining toys from Papa and Bubbie. 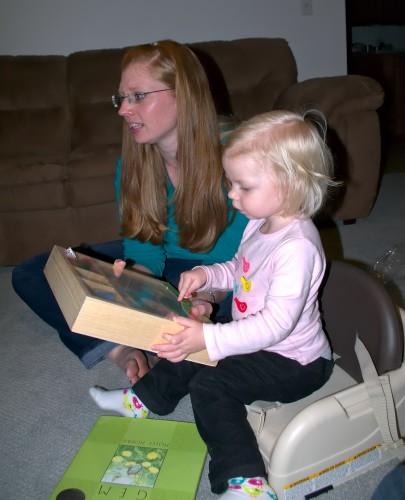 Wearing the tutu Grandma made for her: 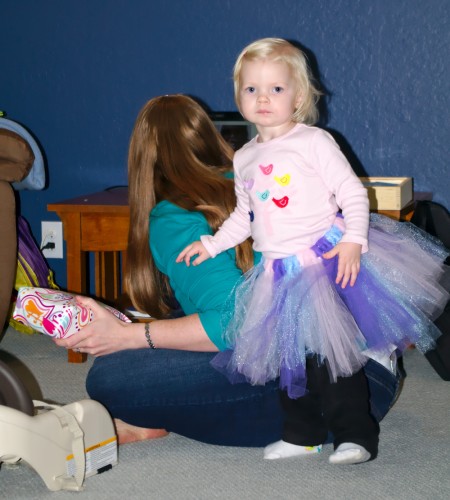 And breaking in the easel we got her. (IKEA rocks.) 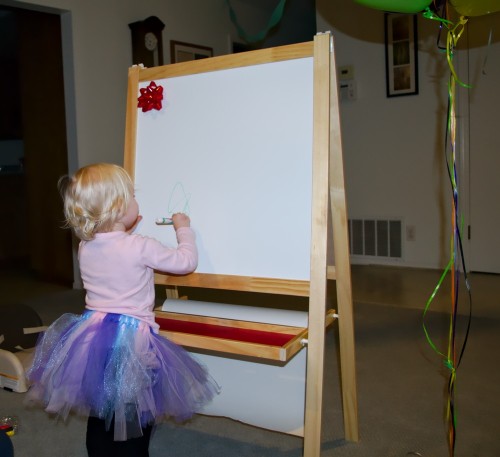 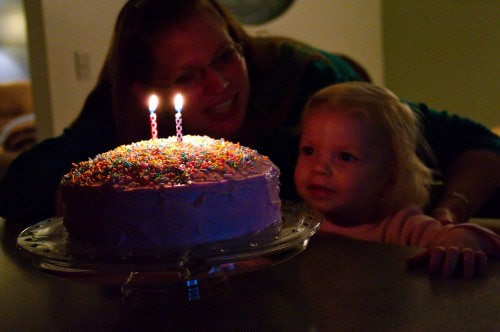 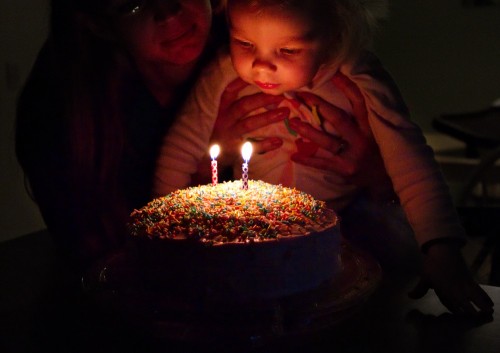 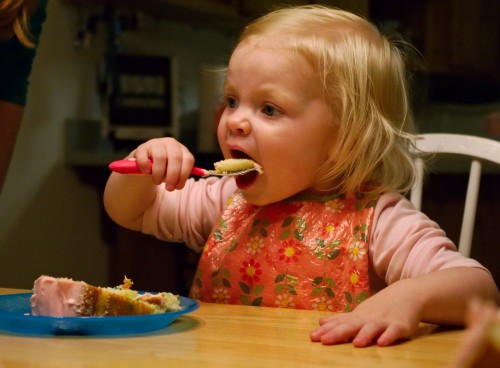 I know I haven't written an explicit Heather update in a long time, but she's pretty universally fabulous. She's become quite chatty, putting several words together and speaking in simple sentences. Her speech is getting much clearer, too, although I still frequently serve as interpreter.

Heather loves to look at books, which pleases Kyle and me no end, of course. She also really enjoys coloring, which is why we got the easel for her. She really likes it! Music is another favorite. She requests certain songs: Child of God, Family Song ("Families Can Be Together Forever"), Temple Song ("I Love to See the Temple"), Popcorn Popping, Sunbeam Jesus Song ("Jesus Wants Me for a Sunbeam"), ABC Song, Twinkle Star, Row Boat, Baa Baa Sheep, and more. We go to story time at the library every Monday morning, and it's a major highlight of her week.

Thankfully, Heather also loves going to nursery. As soon as sacrament meeting is over, she's down and on her way to "Nursery Time!" She loves playing with her friends in nursery and at the park.

Her favorite TV shows (on Netflix) are Sesame Street and Daniel Tiger's Neighborhood. And Winnie the Pooh is still pretty much her favorite movie ever.

At her two-year checkup last week, the doctor said she is doing great! She weighs 26 pounds (approx. 50th percentile) and is 35.5" tall (approx. 85th percentile). I can't believe how different she looks than she used to. Pictures of her at 1 year old don't even look like her. It's weird.

Her typical day starts around 7:30, when Kyle gets her out of her crib. (She wakes up before that, but plays on her own for a little bit.) She eats breakfast (usually yogurt) soon after. The morning's entertainment changes: sometimes we go to a zumba class at the church, sometimes the park, sometimes story time at the library, and sometimes we just chill at home. Lunch is around 11:30, then down for her nap soon after noon. Depending on when she actually falls asleep, she'll get up around 3pm, give or take a half hour or so. Then we usually look at books or something until Kyle comes home from work. Then it's dinner time, and bedtime is around 7:30pm. Heather can be sorta flexible with sleep times, but not too much. When she's overtired, she is more likely to get night terrors, and that ain't no joke. It's pretty awful, so we try to make sure she's getting enough sleep.

I can't think of anything else to say about Heather except that Kyle and I both adore her. She keeps us laughing and generally lights up our lives. So now, I leave you with another video of Heather playing with her balloons: