My family went there when I was 9-ish and I have vague memories of that trip (mainly of Mom being scared as the kids climbed the ladders up from Balcony House [I understand why now]).

We rented a kiva room which is an upgraded room with air conditioning (but that's the only real difference).  We weren't sure whether we'd need air conditioning or not at the beginning of September, but it was nice to have during Heather's afternoon nap times.

We got there late in the evening on Tuesday, September 4.  After we got checked in to our room we had dinner at the Metate Room which is the nicer dinner restaurant.  The place to eat all other meals (and cheaper) is the Far View Terrace Cafe (it's also open for dinner, but closed before we arrived).  The food is a little pricey for what you get, but then, you are basically in the middle of nowhere so you don't have a lot of options.

If you wanted to save some money and plan ahead you could easily bring cereal and sandwich stuff (the rooms have mini-fridges).

But enough of the accommodations--on to the attractions:

It was the somewhat off-season when we were there which means you can get multiple tours on the same day.  Tour tickets can be purchased only at a few places (and not in advance).  One of the locations is the Visitor's Center which happens to be across the street from the Far View Lodge, so walking over when they open at 8am is a great way to make sure you get the tour times you want before they fill up.

We went on tours of two of the cliff dwellings, Cliff Palace in the morning and Balcony House in the afternoon.  We had specifically bought a child-carrier backpack off of Craigslist in which to carry Heather for these adventures and it worked out great.

Compared to Balcony House getting to and from Cliff Palace is easy.  You walk down from the mesa along staircases that have been built and then come back up some into the dwelling.  This dwelling faces west, so we did the tour in the morning while it was in the shade. 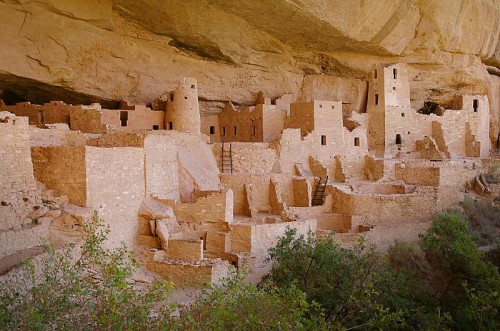 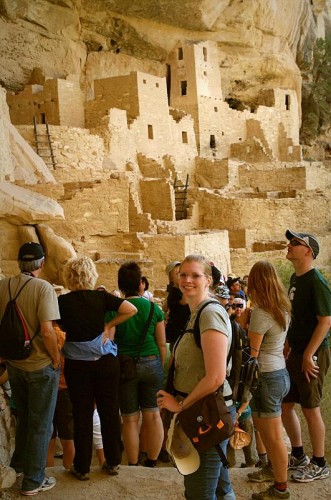 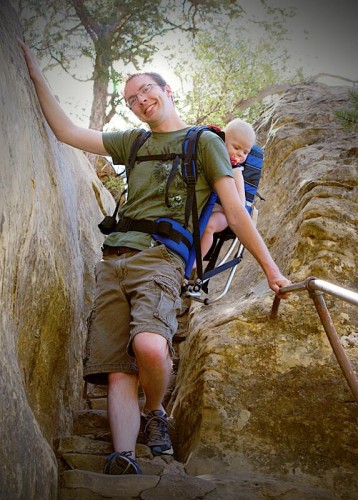 The tour of Cliff Palace overlapped with Heather's normal nap time.  She got a bit fussy, but I was able to bounce her and rock her and eventually she fell asleep on my back. 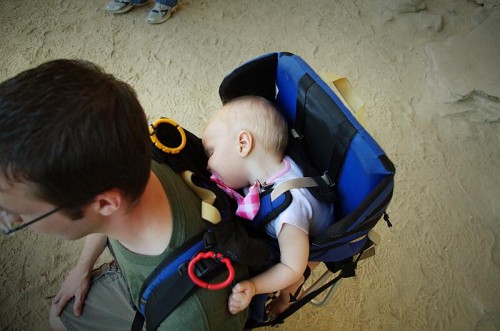 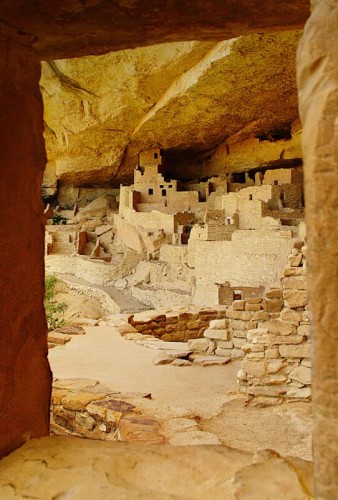 After the Cliff Palace tour we ate lunch and then went back to the room to get Heather a real nap.  Then it was time for our next tour.

Balcony House is harder to get to and from than Cliff Palace.  You start by taking stairs down from the top of the mesa and then you have to climb a ladder to get up into the dwelling.  Once inside you have to squeeze through some fairly narrow passages.  And to get out you have to climb up a few ladders and walk along a very narrow ledge.  This dwelling faces east, so we did it in the afternoon when it was in the shade.

Going through the narrow passages I had to take the backpack off.  For one of them I was able to carry it in front of me and maneuver it through.  But for the other passage we took Heather out and I carried her in my arms while Jess shoved the backpack through in front of her.  Our hands were a little full, so we don't have any pictures of that process and the pictures I took of the passages themselves aren't particularly illustrative.  So here's a picture of Jess and Heather in Balcony House: 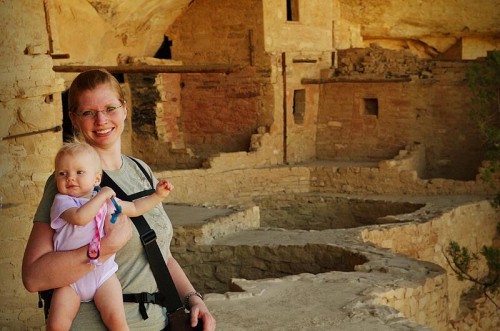 Below is the ladder system to get back up to the parking lot.  Surprisingly, it was essentially what I had remembered from when I was a kid.  The ladder rungs are fairly round and very smooth which makes them feel rather slippery.  Then you walk up a narrow path with a short chain rail/fence and then up another ladder.

Oh, I forgot to mention that below you at this point is essentially a several hundred foot drop to the canyon floor.  So I understand why Mom was nervous about this when we were kids.  I was glad to have Heather 5-point harnessed into a backpack. 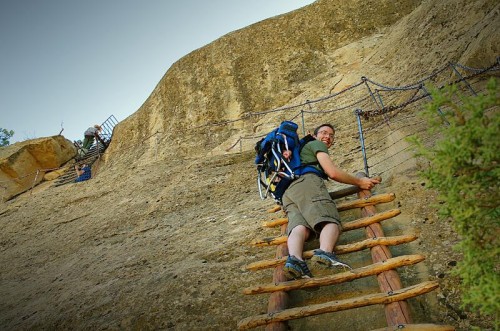 Since Mesa Verde is mostly in the middle of nowhere I thought it'd be a fun place to try taking some pictures of stars.  I was able to take some shots which actually mostly turned out alright before a ranger came and yelled at me.  Despite there being no rules (as far as I could tell) about being out and about at night he was apparently suspicious of my intentions outside at night with a camera on a tripod pointed at the sky (and basically told me to go away). 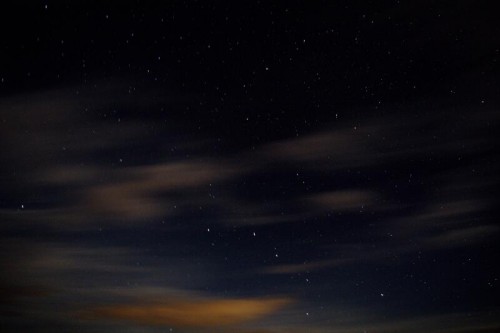 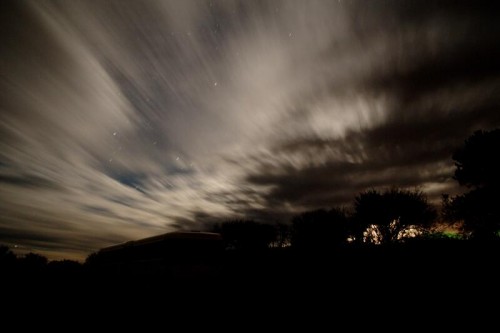 The picture below would be really cool if the exposure hadn't been too long.  All the blurriness is from the motion of the Earth rotating (notice the horizon is nice and sharp).  The lights on the horizon (as far as I could determine) are from a small town about 50 miles away.  So that gives you an idea about what light pollution does when trying to look at the sky. 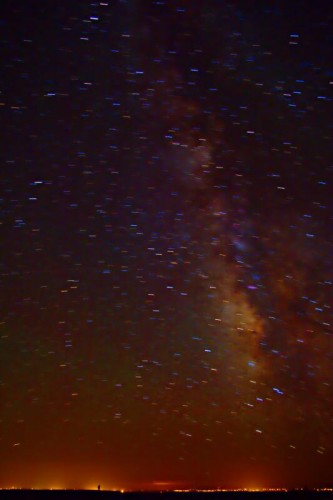 We stayed at Mesa Verde for two nights and then it was time to head home.