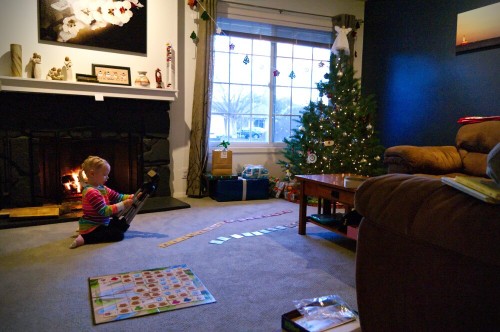 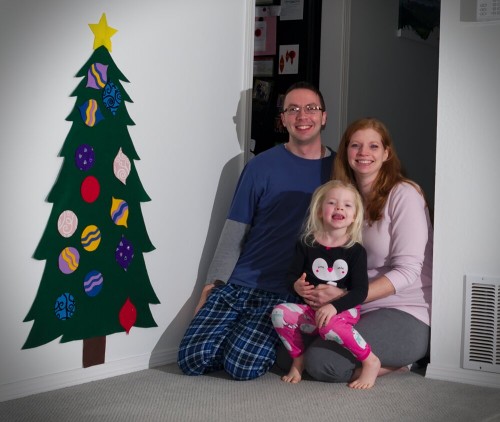 A general Christmas post is forthcoming, but take a look at this grow-your-own-Christmas-tree kit (spoiler: it's actually salt crystals, not a plant). Thanks Mollie.

Here's a 2.5 hour time lapse of it growing (or download it here: Tree Crystals using right-click, save as...), and below is the fully grown tree. 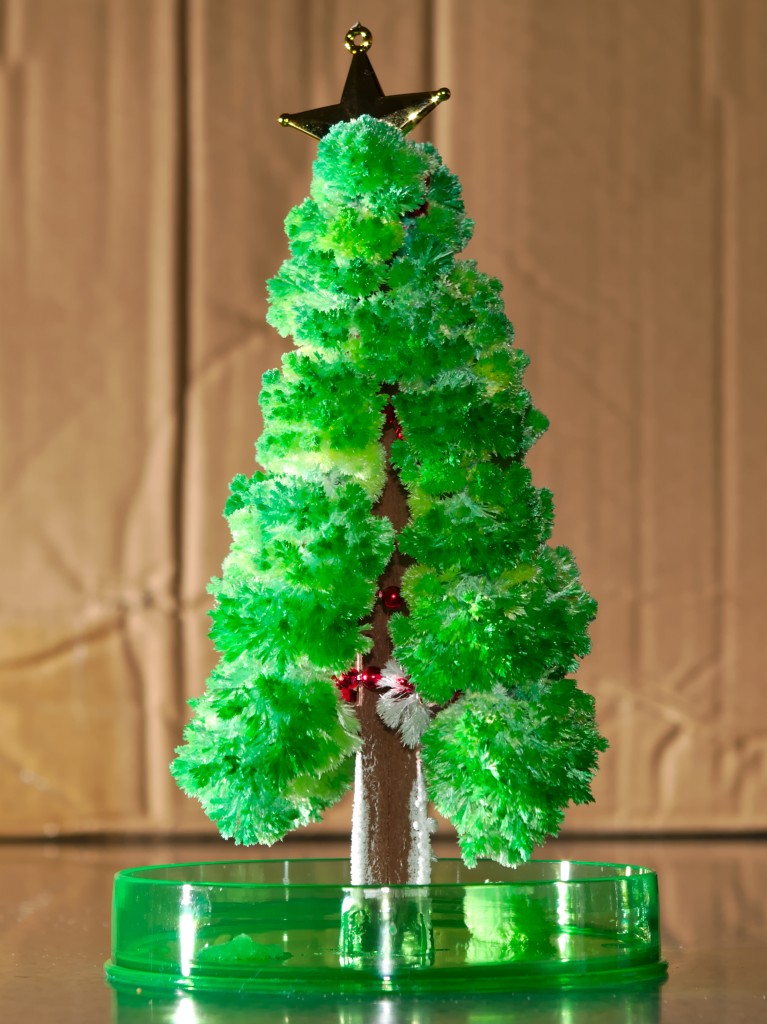 Former Deputy CIA Director John McLaughlin tells NPR, "We may have made a few terrorists uncomfortable for a short period of time in order to get information that we felt was essential to protecting the United States."

By which he means:

In November 2002, a detainee died from hypothermia after he was held "partially nude and chained to a concrete floor."

Some detainees were kept awake for up to 180 hours, "usually standing or in painful stress positions, at times with their hands shackled above their heads."

Some naked detainees were "hooded and dragged up and down corridors while being slapped and punched."

Detainees were kept in total darkness and shackled in isolated cells, bombarded with loud noise and given only a bucket in which to relieve themselves.

...chained to the ceiling, clothed in a diaper, and forced to go to the bathroom on himself.

Multiple CIA detainees subjected to the techniques suffered from hallucinations, paranoia, insomnia and tried to mutilate themselves.

...became completely unresponsive after a period of intense waterboarding.

At least 26 were held "wrongfully," partly because there was no information to justify their detention.

The waterboarding technique was physically harmful, inducing convulsions and vomiting.

Detainees were often held down, naked, on a tarp on the floor, with the tarp pulled up around them to form a makeshift tub, while cold or refrigerated water was poured on them.

Others were hosed down repeatedly while they were shackled naked, in the standing sleep deprivation position.

...the CIA instructed personnel that the interrogation of Abu Zubaydah would take "precedence" over his medical care.

CIA officers also threatened at least three detainees with harm to their families—to include threats to harm the children of a detainee, threats to sexually abuse the mother of a detainee, and a threat to "cut [a detainee's] mother's throat."

Quotes from NPR, CNN, and SF Chronicle articles; and from the document itself.

Is this what you consider acceptable treatment of prisoners?  Would we ever accept this if done to U.S. military personnel?  Is this simply making them uncomfortable?  How could anyone read those descriptions and say all we did was, "made a few terrorists uncomfortable."?

Having just finished my graduate course on terrorism the release of the summary of the report regarding the CIA's interrogation activities is particularly interesting to me.  [NPR coverage here.]

Second, instead of spending pages and pages (as the Department of Justice did) analyzing the legal definition of torture and whether you've violated it; let's use a much easier route.  Sample the population and describe the actions as having been committed against U.S. civilians captured by, let's say, North Korea.  If we consider it torture for North Korea to do that to our citizens then it's torture for us to do it to anybody else.

The argument then usually falls back to, "well, so what if it was torture, we needed the intel it resulted in."  Despite this being a highly disputed claim (especially within the new report) it's irrelevant.  Torture is wrong.  Efficacy does not matter.  Why?  Why is torture wrong?  The simplest argument is that it's wrong for the same reason that capital punishment is wrong.  At some point you're going to do it to someone who is completely innocent and there's no taking it back.  But it's wrong beyond that.  It'd be wrong even if you absolutely knew without any doubt whatsoever that the victim was guilty.  Despite the copious quantities of evidence that torture probably doesn't work, results in backlash, alienates allies, and radicalizes enemies we need no data points here.  This is moral conviction.  Treating another conscious, living thing that way is wrong.

The only thing I find more disgusting than the fact that these actions were carried out in our names is that no one will be held accountable for it.  No one has been or ever will be charged with violating human rights or international conventions.  They did these disgusting things and told the world they did it for us.  Your name, my name, my daughter's name, our flag, our country have been slapped on the use of torture claiming "We Approve!"

I do not approve.

We as a country need to change.  We need to apologize to the victims and their families.  Yes, even though the prisoners most likely were awful people, what we did was unacceptable.  The idea that the victim was a bad person does not excuse mistreating them.  We need to do something to ensure it doesn't happen again.  We need to show why the United States is better than a terrorist organization, not stoop to their level.  If we're going to claim to stand for freedom and justice then we need to actually practice what we preach.

We need to be better.

First things first, I had to make a countdown chain like we had last year. I fancied up the posterboard it'll get mounted on a little bit, though. 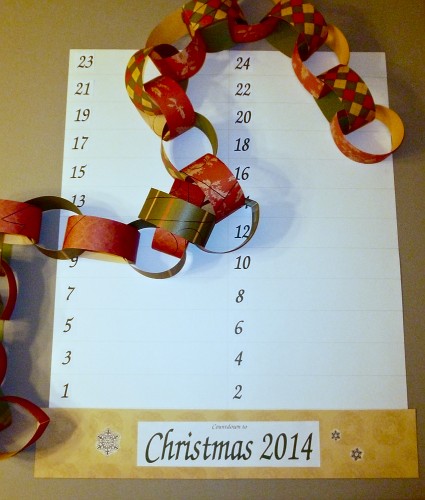 This is what it looks like a few days in: 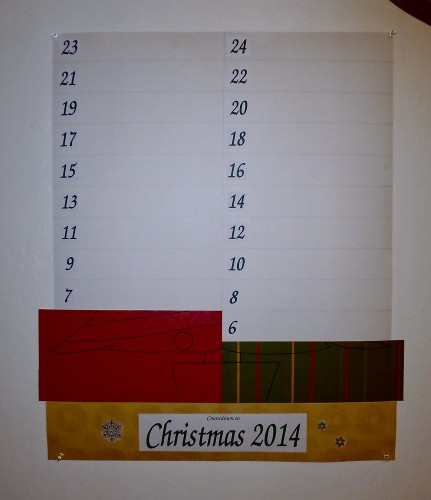 Next, I saw this idea on Pinterest and thought Heather might really like it: a felt Christmas tree with felt ornaments she can decorate and play with all she wants. I freehanded my own tree, but used the templates here for the ornaments and star. I can't sew, but I can cut and glue, so it seemed like a good project for me. I'm pretty pleased with how it turned out, and Heather got super excited when I explained that it was her tree for her to play with however she likes. 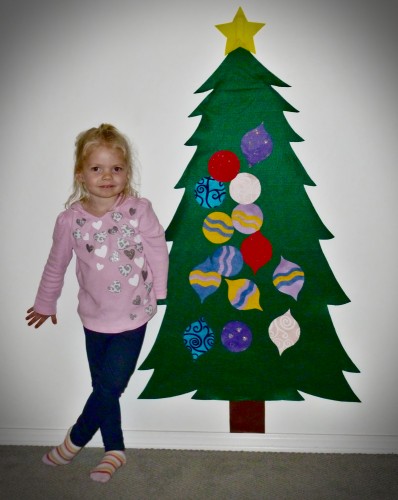 Lastly (though actually, it was started first), I crocheted a garland. Once again, I found the patterns online (stars, trees, and snowflakes) and went from there. 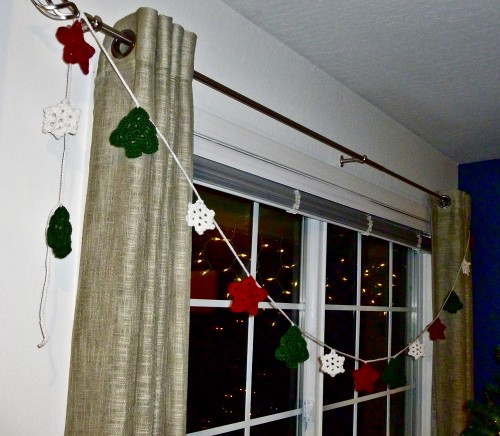 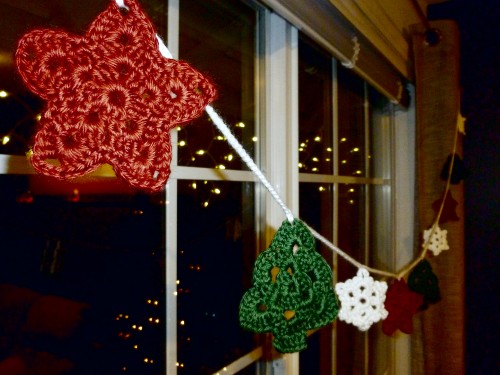 And as a final bonus, I also just ordered a couple of canvases. The first is a page from a coloring book that I colored. I think I'll put it in the nursery. 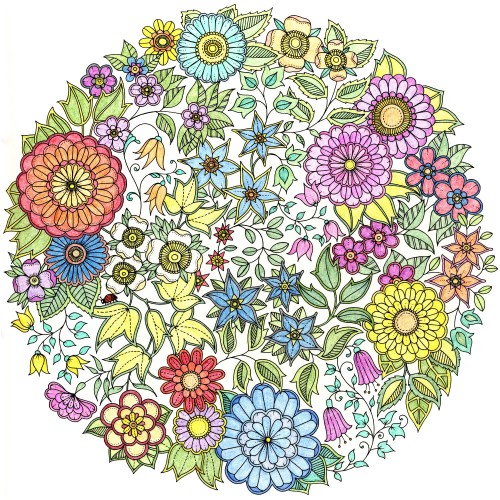 The text on this second canvas is the chorus from a song our Primary learned this last year. The chorus has always moved me in particular, so I put this together (with a lot of help from Kyle) and had it printed up. 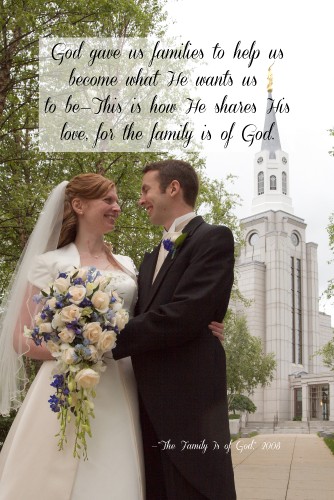