We got up early on Friday October 7 and took the train from Berlin, CT down to Washington, D.C.  Mom & Dad went on this excursion with us.  We spent 5 days in D.C., so this post is fairly long.

From Union Station we walked to our hotel, the Holiday Inn just south of the National Air & Space Museum.  After dropping off our luggage we popped over to the museum for a little bit before closing. 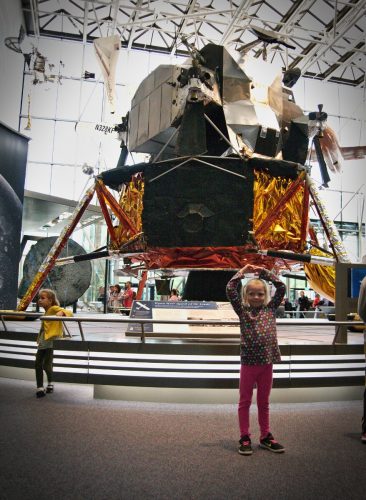 Curiosity Rover!  No idea what Heather is doing... 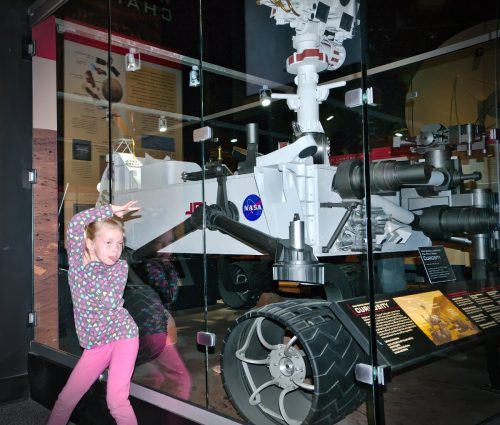 On Saturday we got up, ate breakfast at McDonald's (the only restaurant anywhere near the hotel open for any useful set of hours [except the two sit-down restaurants attached to the hotel]), and headed off to the Building Museum.  A "Building Museum" may not sound very interesting, but it has a bunch of things in it and many that are geared towards young kids. 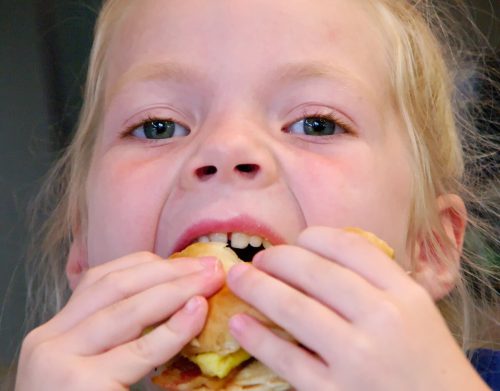 The first snag was that Taste of D.C. was getting set up directly between our hotel and the Building Museum and we had to detour around it since the entire thing was fenced off for several blocks--annoying.  The second snag was that the Building Museum was hosting a pay-to-enter craft fair in their Great Hall which is usually available as a play space--super annoying. 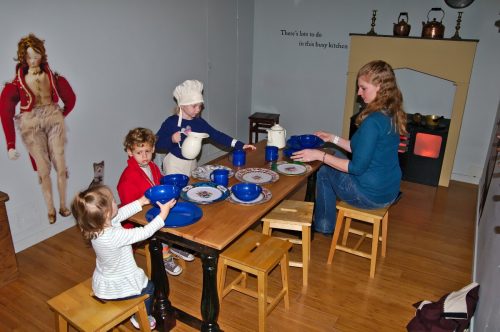 Fun fact:  The Building Museum building was originally the Pension Bureau.  Brick was chosen to meet the anti-flammability requirements as the facility was going to house all the pension records.  The steps were designed to be shallow and easy to climb to make it easier for war veterans to navigate the building while handling pension issues. 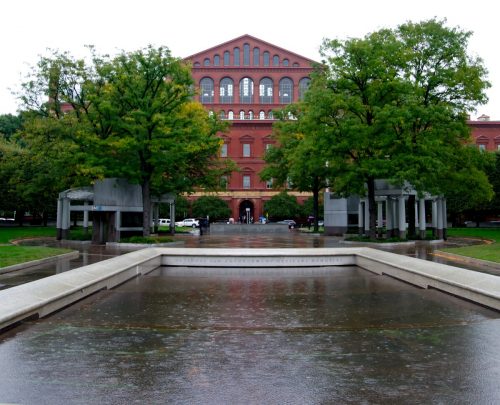 After some time there we grabbed some Subway for lunch nearby.  Then we walked back to the hotel in a light rain in order to get the girls down for a nap.  They were going to need a nap because we were going to be out late getting a West Wing tour of the White House from Mikey.

We took the Metro from the hotel up to the White House and then had dinner at Custom Fuel (a counter-order pizza chain) while we waited for our tour time.  Mikey met us at the restaurant and then off we went.  We made it through guard shacks 1 and 2 successfully and got in to the White House (can't take any pictures inside, except in the Press Room).  We had to pause shortly after starting because a Secret Service agent didn't like where we left the stroller and made me move it, but the rest of the tour went without issue.

We saw the Oval Office, the Roosevelt Room, the door to the Situation Room, the Navy Mess, the Rose Garden, and the Press Room.  Jess was really pleased with the "Jumbos"--pictures taken by the White House Photographer that get hung on the walls throughout the building and changed out regularly. 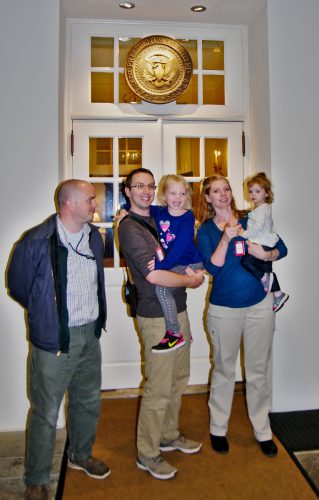 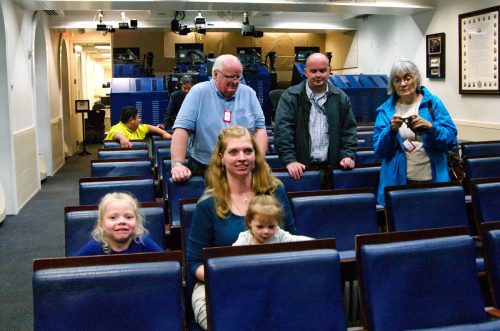 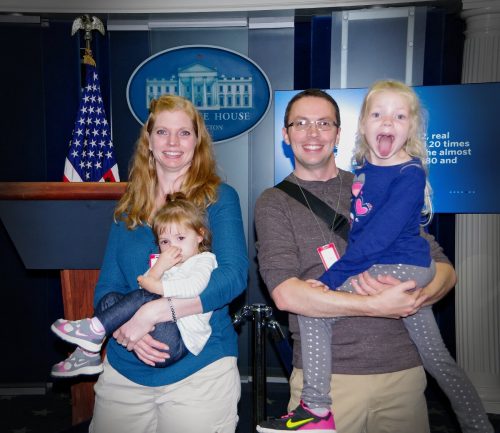 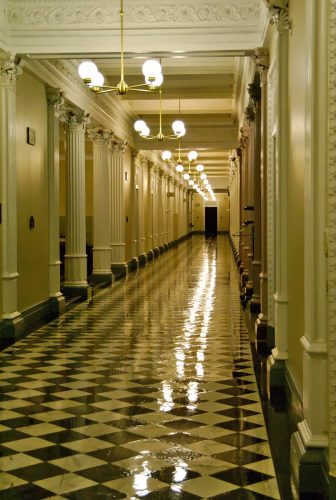 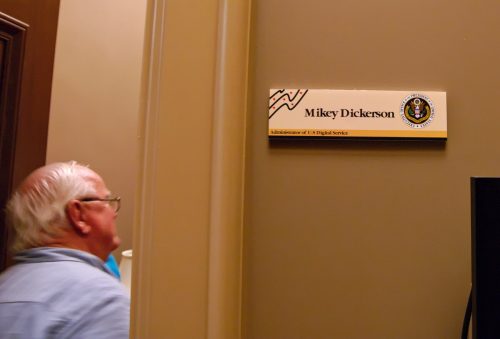 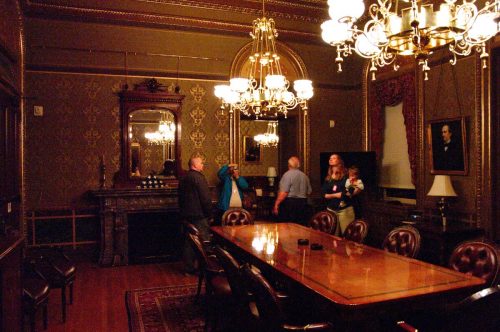 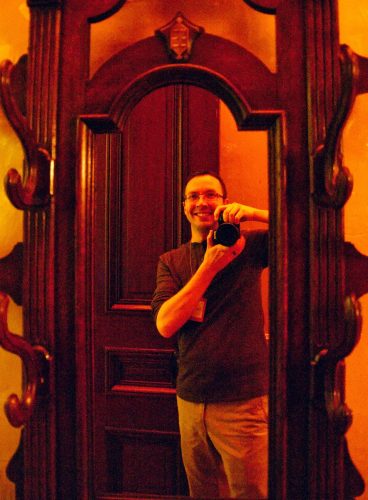 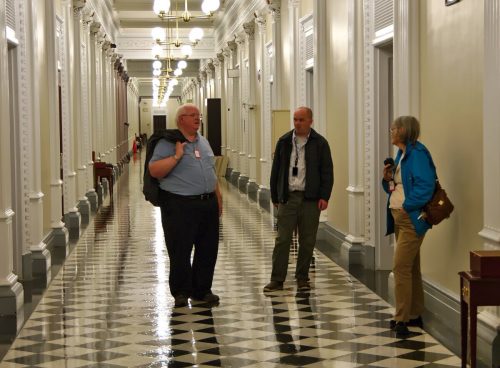 After wandering around the EEOB for a while we got back on the Metro and headed back to the hotel.  Corinne liked the Metro.

Sunday morning we were off to the National Museum of Natural History.  So much to see and not nearly enough time to see it all.  We got through most of one floor including the dinosaurs, mummies, insects, butterflies, and some geology.  Heather and I read a book about mummies on the train ride out, but in the museum she got all weird in that exhibit and we basically raced through to the other side.  Not sure what her deal was. 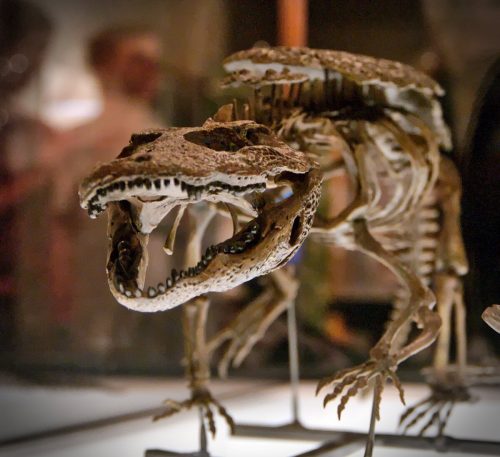 We did the Butterfly Pavilion walk through and the butterflies seemed to like Heather and Jess. 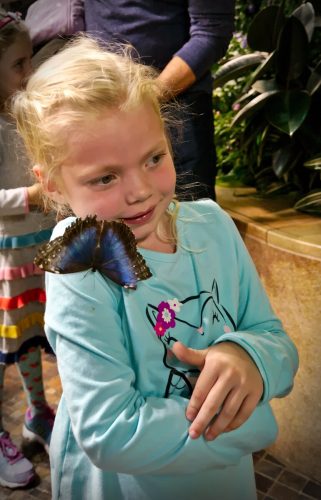 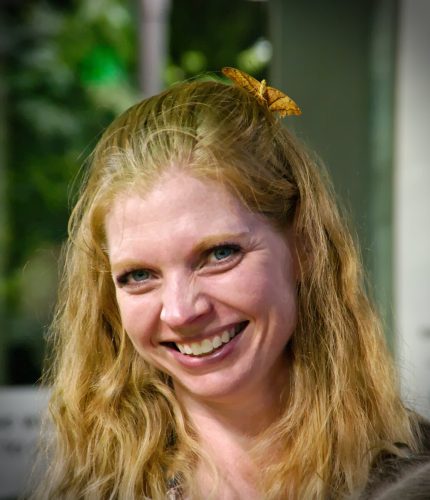 Lunch was down in the atrium and felt a little like the cafeteria in Jurassic Park.

After lunch we walked down to the Washington Monument and on down to the Lincoln Memorial for sunset. 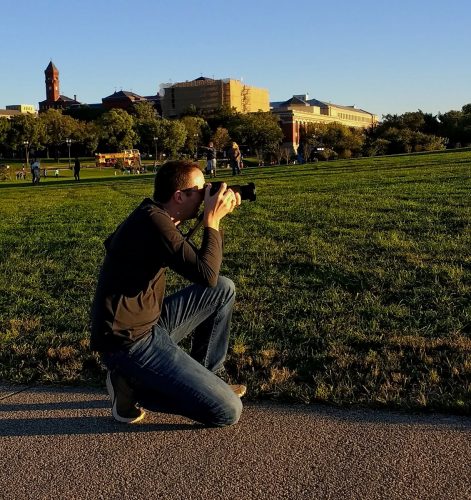 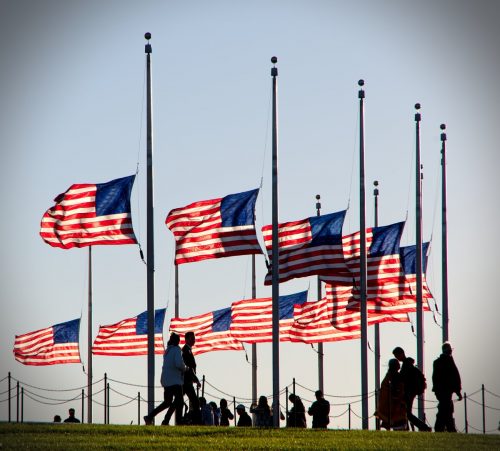 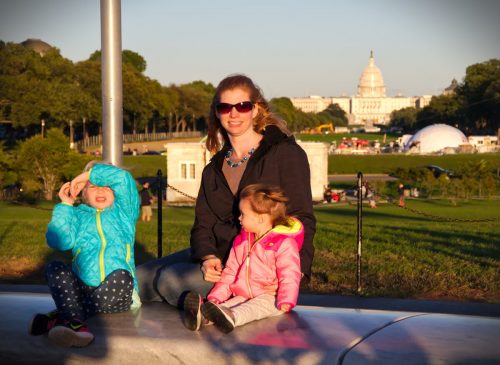 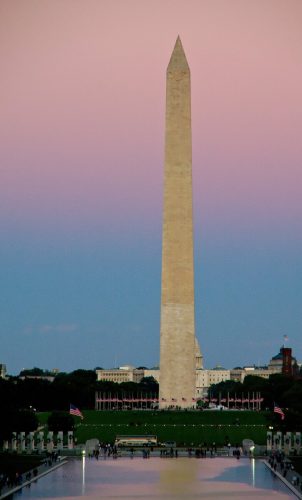 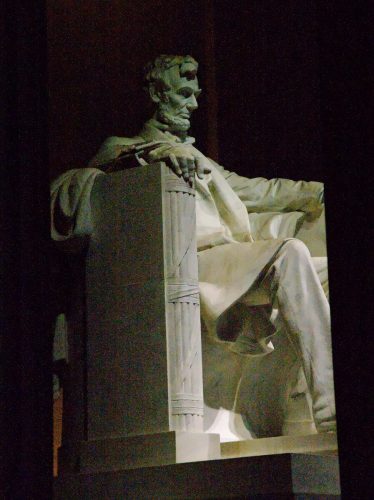 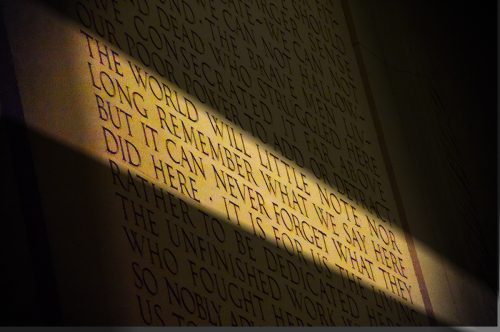 Then we went by the Korean War Veterans Memorial and on back to the hotel.

Monday was Columbus Day.  We headed back to Union Station, but not to leave.  We took a Duck Tour (amphibious assault vehicles from WW II refurbished into tour buses that go through the water as well).  While we waited for the tour to leave we watched the Knights of Columbus do their wreath laying ceremony at the statue of Christopher Columbus that stands outside Union Station. 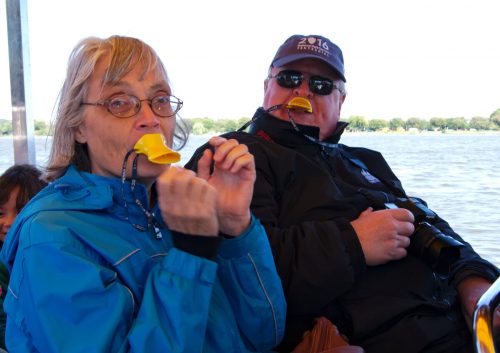 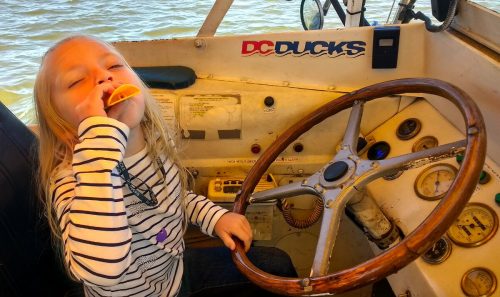 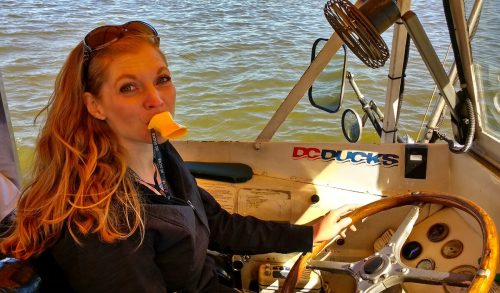 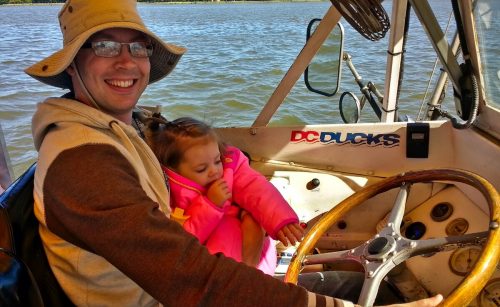 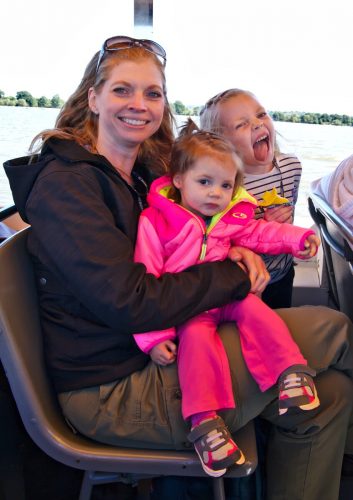 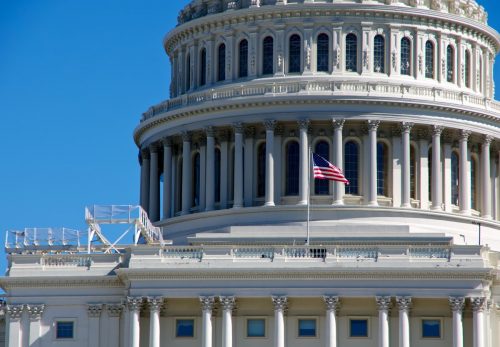 After the Duck Tour we ate lunch and went to the National Postal Museum (just across the street from Union Station).  Here's Heather sitting in the cab of a "semi" mail truck.

Again, you might not think it would be very engaging, but it's a pretty neat museum and not very crowded.  I wish we had had more time to spend there.  But instead it was off to the other side of town to see the Renwick Gallery and try to pick up an official White House Historical Association Christmas tree ornament.  Unfortunately, the WHHA was closed, so I had to order the ornament online instead. But the Renwick Gallery was pretty neat.

Tuesday was our final day in D.C.  We went back to the National Air & Space Museum to see some more exhibits before heading to Union Station for the train ride back to Connecticut.

Here's Heather in front of the Apollo 11 Command Module. 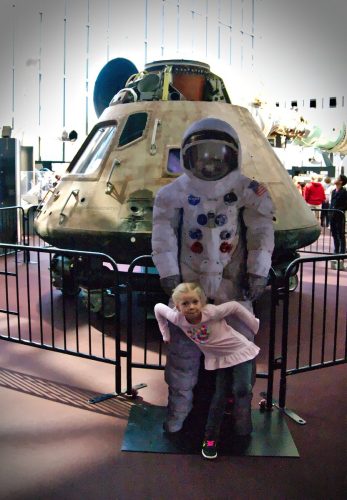 During this trip Heather developed two new anxieties.  One morning she ran and hopped on the elevator before the rest of us and then the doors closed.  We pushed the call button before it started moving and the doors reopened, but she was freaking out.  After that she would basically glue herself to our sides while entering elevators.

The second incident was on the metro.  We were talking about how many more stops before ours and she had misunderstood something we said.  When we reached the next stop (not ours) she jumped out of the train all excited to be on our way.  We started yelling for her to turn around and get back on the train and she did, but she freaked out about it.  Hindsight: It would probably have been smart for one of us to go out after her and bring her back, presumably one of us would have jumped out if she hadn't come right back.  So after that she had to be coaxed on to the metro and soothed in order to dare ride again.

We don't interact much with subways or elevators on a regular basis so we don't really know if these are still issues for her or not, but I'm sure it will resurface at some inopportune time in the future.

Back at the house was another rest day and then Lyman Orchards for apple picking!