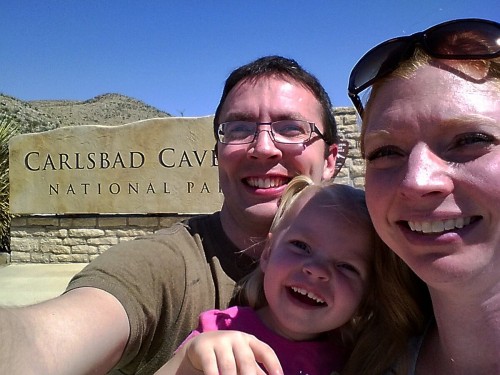 We left Texas on the 29th and headed for Carlsbad, NM.  We got into town and checked into our hotel, found some dinner, and went to bed.  Then it was up the next morning and off to Carlsbad Caverns National Park.  Carlsbad isn't much of a town and probably only really exists because of the caverns.  But people don't take family vacations by driving like they used to and it seems to really be hurting the area.  The parking lot was no more than one-third full which led me to ask an employee when their busy season was.  They replied that it was the busy season.

At least in one way it's a good thing they're not busier.  The staff running the cafeteria were certainly not interested in speedy service.  It honestly took them 10-15 minutes per customer to serve up mainly already-prepared food.  So the line only had about 4 people in it, but you didn't expect to be standing there for an hour before being served.  Regardless, the caverns themselves were pretty interesting.  We took the elevator down to the main cavern (rather than walking down which Jess' knees were not going to cooperate with).  Heather was a bit concerned with the whole thing, but eventually calmed down and enjoyed herself.

I was surprised with how quiet it was.  I expected there to be a lot of echoing such that you could hear people all the time, but that's not the case.  The rocks are apparently of a material that absorbs a lot of sound.  That combined with how few people were around meant that at times we'd be standing by ourselves in near silence, deep underground with minimal lights.

Once we finished up in the caverns we loaded back up in the car and headed off to White Sands National Monument.