By request, here's my attempt to explain Bayes' theorem (cribbing heavily from Wikipedia).

We start with the standard definition of conditional probability (for events A and B):

The summation axiom helps us understand the joint probability of A and B:

Filling back in our definition of conditional probability, we have (with the understanding that P(B) is not 0): 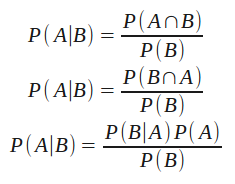 The third equation is the simplest form of Bayes' theorem.  It wasn't very hard to get to and the math, relatively speaking, is quite simple (we're not talking about deriving the Schrödinger equation or anything absurd).  But its application, and understanding what it means, can be tricky.

P(A) is called the "prior," representing our prior belief in the occurrence of event A.

P(A|B) is called the "posterior," representing our belief in the occurrence of event A after (post) accounting for event B.

The remaining pieces, P(B|A) / P(B), are called the "support," representing the support event B provides for the likelihood of event A occurring.

I'll re-use the medical testing scenario from the previous post.

Substituting T to represent a positive test result and D to indicate the presence of the disease our equation becomes:

So now we just need to map the numbers we have about the disease and the test to the variables in our equation:

P(D), our prior, is 1 in 200 million--the disease occurrence rate in the general population.

P(T|¬D), the probability of getting a positive test when the disease is not present is the false-positive rate: 1 in 100,000.

So let's plug these numbers in step by step: 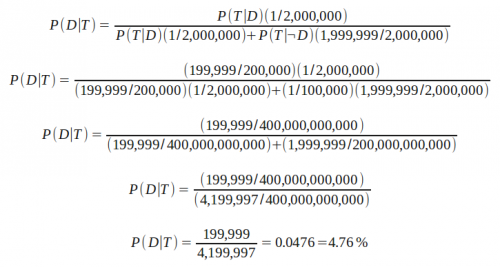 And we see that P(D|T), the probability that the disease is present given a positive test, is only 4.76%.  (My previous post incorrectly reported this as 0.05%, I've corrected the error.)

The dealership was trying to push an insurance policy on me by only reporting P(H|S), but unless we account for the number of Honda Civics on the road in the first place, P(H), we aren't getting the full story.

(Notice that we don't have to actually care about P(S) if all we're doing is comparing car make/models.  P(S) doesn't change for the different make/models so it doesn't affect the relative rankings.)

One thought on “Bayes' Theorem”