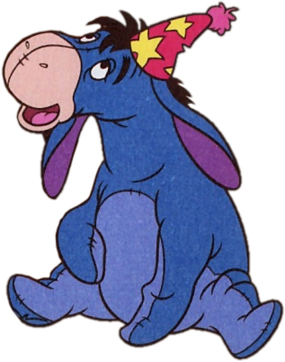 Well, Sunday was my 29th birthday. I've not usually been big into celebrating birthdays, but this one was pretty good and Kyle's been harassing me to blog it, so here we go.

We started the festivities with dinner on Saturday night at the Cheesecake Factory. I've always adored their dulce de leche cheesecake, and I've recently fallen in love with their chicken marsala with mushrooms, so that's where I chose to go. I would highly recommend both to anyone, but Kyle of course abhors the "demon fungus." Weirdo. He did get some very tasty cashew chicken, though, even if he did insist on getting strawberry cheesecake. Anyway...

Our church is at 9 am, so I pretty much never have breakfast on Sundays (unless it's a granola bar or Pop Tarts), but Kyle got up and made a real breakfast(!) of scrambled eggs and french toast while I showered. After church, I wanted to open presents, but Kyle said I wasn't allowed to until we had cake (which wouldn't be until that evening). But I already knew that one of the presents was a laptop (mine has been dying, so Kyle had been watching sales for several weeks, and we picked one out about a week ago), and I knew it would require a bit of setup. I also knew we had all afternoon ahead of us, which would be a perfect time to do all that setup, so I convinced Kyle that he could get the cake in the oven, and then I could open just that one present. (I later convinced him, with my womanly wiles, that waiting until we had cake would be silly; we compromised and I opened the rest of the presents after the cake was finished.)

So Kyle worked on the cake. Now, I had requested, for my birthday cake, white cake with cherry frosting. But when Kyle went to the store on Saturday, he couldn't find cherry frosting anywhere. Oh, I forgot to mention that I was actually sick all weekend (just a cold, and the worst of it was on Friday and Monday-Tuesday, oddly enough), so I didn't accompany him to the store. When he got back, he told me he'd actually been to three stores and hadn't found any frosting. He was going back out, though. I told him to only go to one more store, and just get cream cheese frosting if they didn't have cherry, but he went to three more (he claims they were "on the way," which makes no sense at all) and still couldn't find any. He came home all upset that I wasn't going to get the cake that I wanted, and I had a hard time consoling him. But the cake still turned out great.

I opened up the laptop: 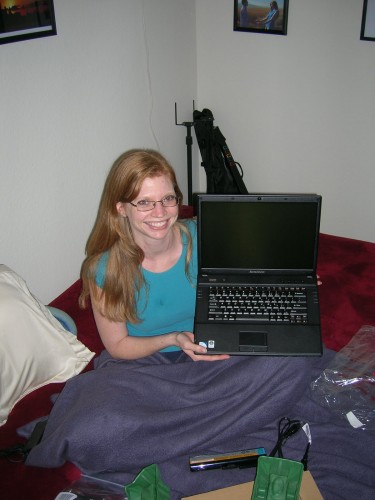 and we spent quite some time getting things set up. We had to get Windows off of it and Linux on to it, and then get all my old stuff transferred over. Fortunately, I married a Master of Science who knows how to do all this stuff fairly easily, so now I'm just getting used to things like a slightly different keyboard layout. And loving that I can actually unplug it and move it around, unlike my old one. Brilliant.

I had to do at least a Body Test on the Wii Fit because Kyle told me that it would do special things for my birthday, and he was right! It was so exciting. The Fit Board guy who talks to you and such wore a party hat, and there were streamers and confetti! 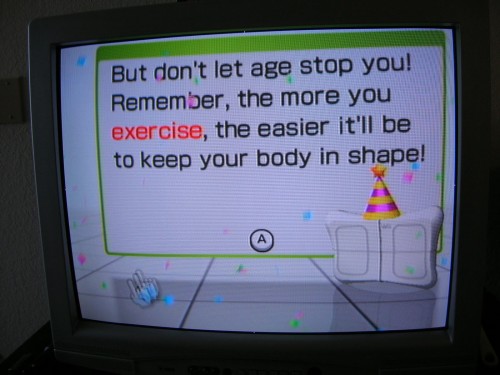 We invited some friends over for cake (and rice krispie treats and apple crisp) that evening. This is one reason we'd hoped the couches would have been here by then, but they weren't. It turned out alright, though, because one of the couples has a daughter, Chloe, who amused herself all night by jumping on the air mattress. It's good that she got to come over while it was still out. Anyway, they sang happy birthday and I only had to cheat a little bit to blow out all the candles: 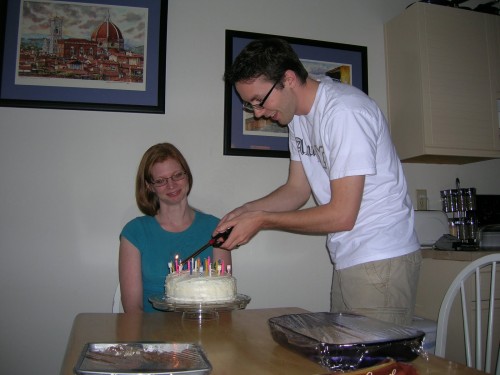 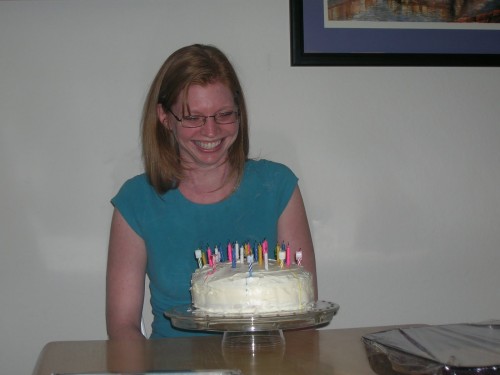 We had yummy treats, hung out and talked for a long time, and even played Mario Kart. All in all, it was a great way to start my last year as a twenty-something.

4 thoughts on “A Day for Eeyore”