On the 16th we went to look at lights around town with friends. It was even a bit chilly.

Christmas Eve at home with cheese fondue with fresh bread and hot chocolate. And a couple of terrible, low-light pictures of the girls opening gifts to each other. Heather received a fossil dig kit and Corinne received 2 Magna-Tile plates (she ran around the house screaming she was so excited).

We added an alicorn and a narwhal to our Christmas lights this year. The alicorn immediately required replacement supports as it would fall over in a slight breeze and its lights are already having issues. So it may have to be returned. But the girls _loved_ it.

And I upgraded our "fire" with some flame-effect lights mounted on a board at the back of the fireplace. Surprisingly convincing in peripheral vision.

I made another Bûche de Noël this year. Unlike last year I skipped all the hazelnut parts and went with a filling of dark-chocolate creme & chocolate-chips with dark-chocolate ganache frosting and chocolate chips for garnish. It was pretty good.

Heather had a Holiday Concert for school on the 18th.  She had a blast.  The program was all 4 kindergarten classes at her school so the multi-purpose room was packed.  Luckily she's a head taller than most of the other kids in her class so I was still able to get a couple pictures of her through the crowd. 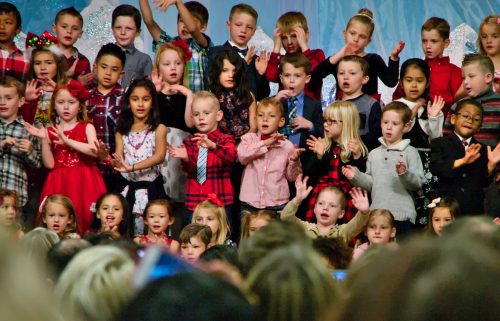 Then it was quickly in to Christmas Eve with our own little "program."  Heather read us "Santa from Cincinnati": 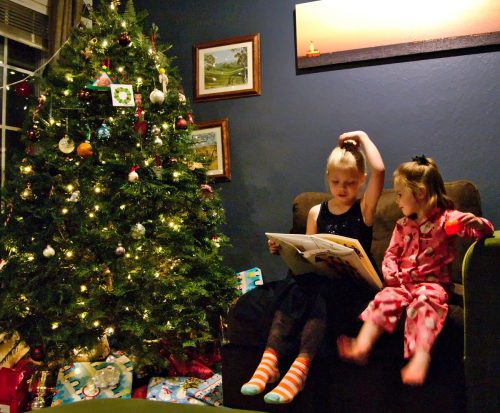 After the program the girls opened their presents for each other: 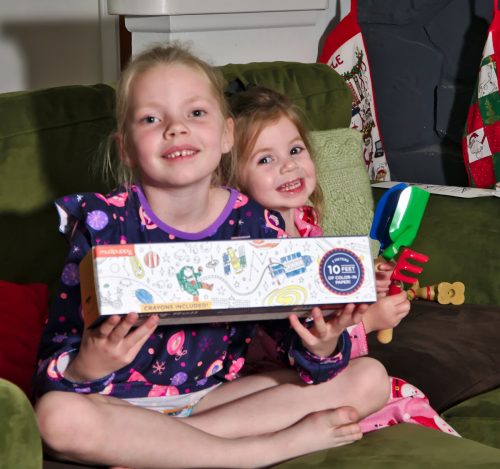 Corinne fell asleep clutching the trowel from the garden tool set.  Heather woke up at no-one-knows-but-possibly-2-something and colored in about 3 feet of her 10-foot space coloring roll. 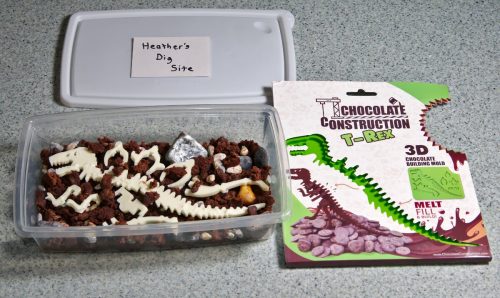 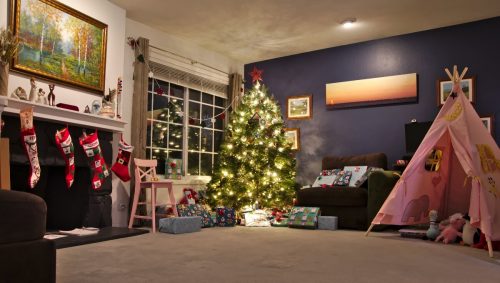 And in the very early morning we snapped an obligatory don't-move-yet shot: 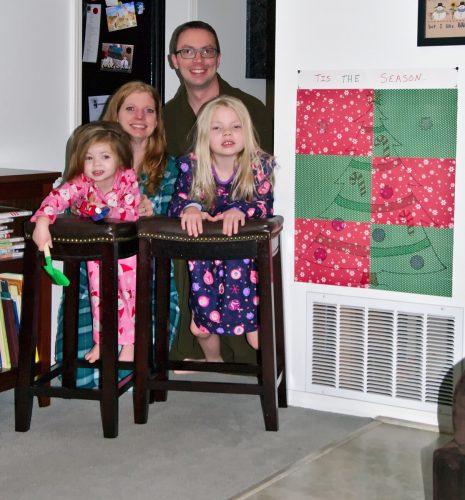 You'll notice it is still dark outside.  Heather had been up possibly since as early as 2-something, but no later than 4.  Corinne was up starting at 4:30.  We held them off until 6:30, but couldn't keep them contained any longer. 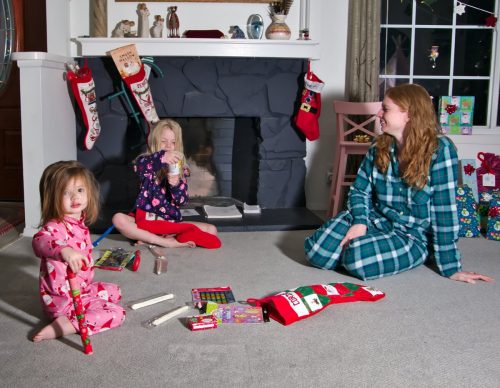 Corinne got a chair in her favorite color: 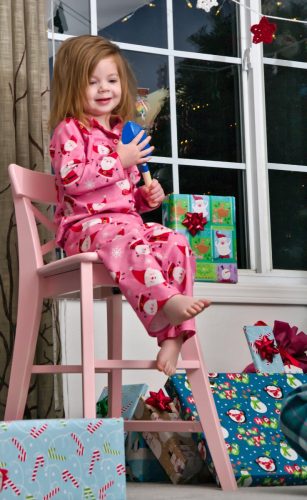 Heather was a super helper handing out gifts from under the tree. 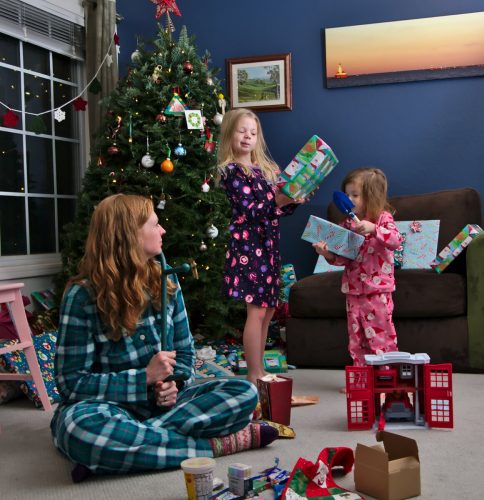 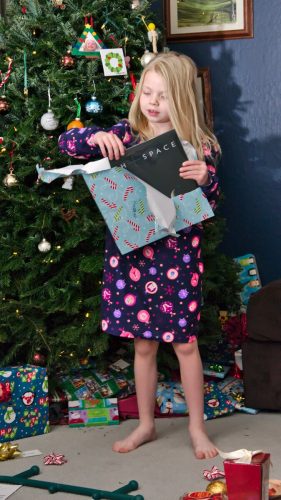 Corinne is enamored of this plane. 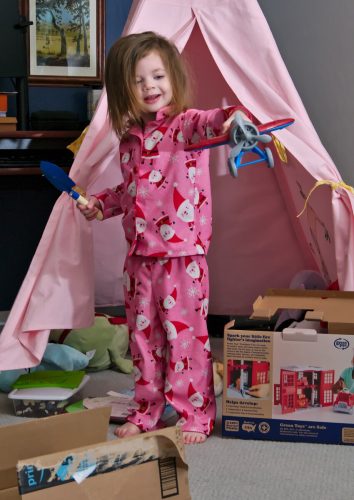 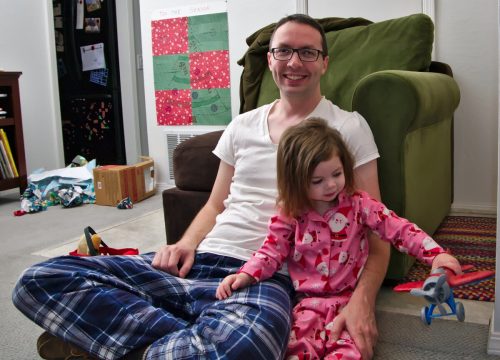 Jess is pleased with her yarn bowl: 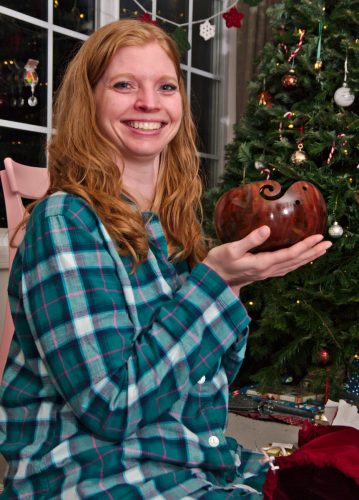 After a brief break for some much-needed breakfast, the sun had risen, and the unwrapping was complete.  Now, nap time. 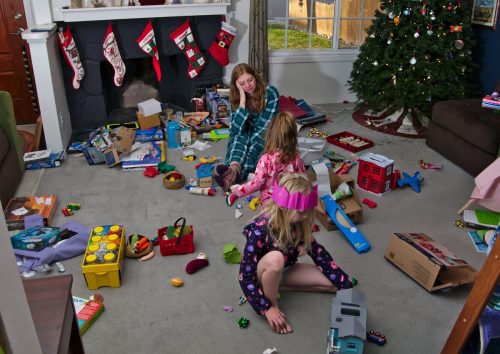 We tried to make corn flake wreaths today. They sort of worked. Corinne did not like having butter on her hands, so she jumped ship early on, but Heather helped shape them. 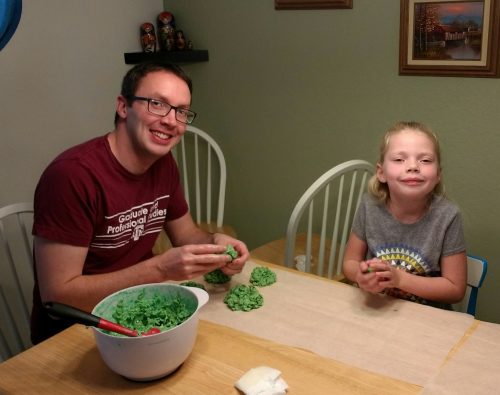 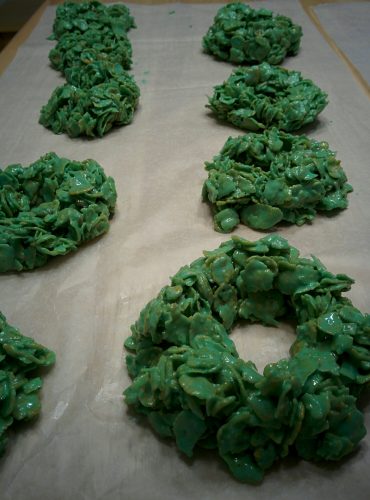