Jess and Heather are doing great. 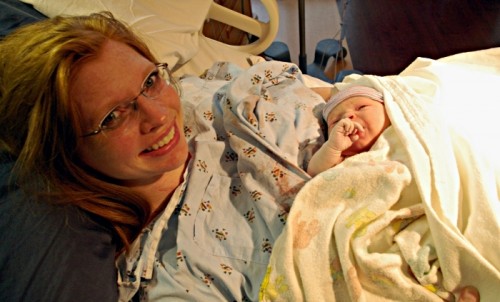 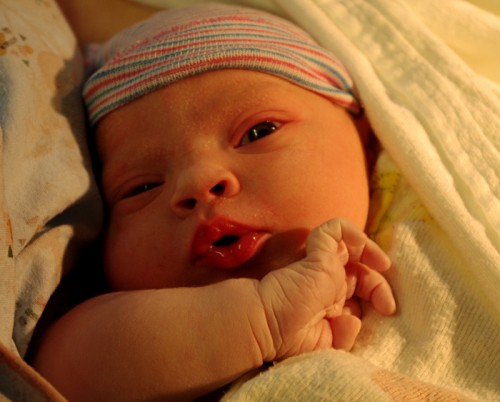 I'll leave the detailed story for Jess to write up.

I had another doctor's appointment this morning. We started with a non-stress test, which involved an ultrasound to check fluid levels and then monitoring to see how the baby's heart rate changed with her movements. Everything looks good, which is great. (Though I will admit to trying to come up with something they could find that would require a quick induction but not actually be problematic. I couldn't think of anything.) Then I met with the midwife, and while she was glad to hear that I've been having (extremely sporadic) contractions since Saturday and agrees that the baby has definitely dropped, she says I have still not progressed, cervix-wise. I was really hoping those contractions would have accomplished something, but apparently I fail at this.

We scheduled an induction for Monday night (yep, we'll be spending Halloween in the hospital, unless this baby gets a move on). We're to call at 6pm to make sure they're not swamped and then be there at 7 (please note that this is precisely the time of day we had hoped to avoid driving to the hospital because traffic is going to suuuuuuuck). Assuming I'm still not progressed at all, they'll start me with Cytotec and then give me Pitocin in the morning. (Though it sounds like they'll just keep giving me Cytotec until they see good progress, so it may take longer.) She warned me that inductions can take a couple of days, start to finish. So it looks like we'll be having a November baby, which is something I really never even considered. (Technically, I could still go into labor on my own before then, but it's not very likely.)

To make my day even more fun, I discovered that my car, which has been parked under a tree for the last week, is covered in bird poop. It's truly disgusting. Like I'm in any condition to wash my car at this point! Also, when I left the doctor's office, I couldn't get into my nasty car because the car next to me was parked too close (jerk!). I had to get in the passenger's side and clamber over to my seat, which was super fun and easy to do. But it's all okay because in the opinion of Random Guy in the Parking Lot, it's awesome that I'm pregnant because his daughter is flying from an island off Alaska to the mainland to have her baby today. Yes, that makes up for everything. (Actually, he was very nice and even offered to back my car out for me if I couldn't get in. It's just that there's very little in the world I don't resent at this point.)

Lastly, I discovered that the mascara I just bought (a curse on makeup companies who keep changing their product lines so you are continually forced to try new things instead of just sticking with the great one you finally found) needs replacing. Apparently, "water-resistant" is not even close to "waterproof" and will not hold up against tears. Stupid me for thinking it might be good enough.

Blah. If it sounds like I'm in a lousy mood, it's because I am. Hopefully I'll get through the next 5 days and have a blissfully easy labor that does not end in a c-section (I really think I've had enough surgeries) and I can write a happy blog next week. Cross your fingers.

Well, today's the due date. Big whoop. I saw the midwife again on Wednesday, and we've still got no progress. Everything looks healthy, though, which is fantastic. I have another appointment this Wednesday, along with a non-stress test (to monitor the baby's heart rate, movements, etc.) and we can schedule an induction then. I'm still really hoping she comes earlier, though! I don't want to do this for another week...

The day won't be a total loss, though: Kyle and I decided we'd go out for dinner tonight if we didn't have a baby yet. I'm betting we'll try out our new local California Pizza Kitchen, which never disappoints. And hey, mebbe we'll require dessert from the Cheesecake Factory next door. Who knows?

Well, it worked! I am over my cold. Finally. Of course, I had a migraine all last week, just to keep me from getting anything done or being any use to anyone, but that's gone now, too. So now I'm trying to get all the stuff done that I thought I'd be doing a month or so ago, like deep cleaning the apartment. This is tricky because I don't have a lot of energy or ease of mobility at this point, but I'm making progress. And Kyle, of course, is a huge help—he cleaned our carpets over the weekend while I laid on the couch, in addition to doing a lot of the cooking and such lately while I've...well, laid on the couch. I've been really frustrated with my inability to do anything for the last few weeks, but he's helped keep me sane (or as close to it as possible).

I got my very first-ever pedicure on Monday (thanks, Rebecca!) and I've decided I need one of those massage chairs. I sat in it for 40 minutes, and my back didn't hurt the whole time! It was bliss. And it was super nice to get my toenails done, since it's been getting really difficult to do them myself! Hopefully it'll last for a few weeks and I won't have to worry about it until a little while after the baby's born. Using the same logic, I scheduled a haircut for yesterday, but when I tried to leave for it, my car wouldn't start! So that's now been rescheduled for Monday. Kyle looked at the car when he got home (using his nerd tools, which he decided are now cool because now they're car tools) and determined that the battery was, somehow, dead. (We still agree that the noise it was making was weird for a dead battery, but that's what it was.) Kyle couldn't get his car around to jump mine because our neighbor's car was parked in the only accessible spot, but she's a nice lady and we just used her car to jump mine. Then we drove around for a half hour or so to let the battery charge up, but when I turned it off, it wouldn't start again. So we got to buy a new battery, which Kyle replaced with just a few of the skills you wouldn't think he'd have, but does, somehow. So that was fun. [Note from Kyle: "nerd tools" being my multimeter, with which I determined that the battery was dead, but the alternator was working fine.]

Ummmm...what else? I went to see my midwife this morning (my OB is going to be out for the rest of my pregnancy with health issues), and things still look good. Baby's in a good position, and seems to be a good size for me, which is reassuring. Sadly, even though I'm at 38 weeks and 5 days, I'm not making any progress. The baby hasn't even dropped yet, which isn't necessarily bad, but would be nice. I've never thought she would come early, but I'm getting rather anxious about her being really late. Largely because I am so ready for this pregnancy to be over, but also because we have things planned and scheduled for the next weeks/months, and I want her to be as old as possible for them. Fortunately, the midwife told me that she could induce me in two weeks (when I'll be just shy of 41 weeks), so there is some light at the end of the tunnel. Of course, I don't want a failed induction that ends up requiring a c-section, either...I've had enough surgery. It'll all work out though, right? Right?

Oh, and because my mom was complaining that I haven't been posting pictures of my pregnant self (of course not! I feel like a bloated whale), here's me on Sunday, at 38 weeks 2 days:

So, a while back I blogged an idea I had about cryptographically signing various documents.  I specifically talked about checks, but you can apply the principle anytime you have a fairly small amount of data which is supposed to be issued from a trusted source: cashier's checks, money orders, driver's licenses, event tickets, passports, boarding passes, etc.

Well, I spent some time playing around and put together a working example.  It's not fancy, but it does the job.  It's been a few months, but it really didn't take that long.  Especially since I had to do some reading about QR codes and using them, along with public-key cryptography, from Python.  So I had a basic prototype done in about a week.  Then back in August I decided to flesh things out a bit more and produce a nice demo application.  I'm calling the system "PaperTrust" as it allows you to embed the trust element onto the paper item.

Text description of the demo:
So, in my demo, we generate data for a cashier's check and then sign it using the demo private key.  We stick the signed data (which includes a signing-organization ID) and the signature into a QR code and stick that onto the check and print it.  Now the check is physical and can be carried around as usual.

Now say you're going to use this check to pay for something from a stranger.  This stranger needs to know they can trust the check.  So they use their verifier application to scan the QR code from your check.  It reads the organization ID, looks up the correct public key for that organization, and verifies that the signature is valid.  It also displays the signed data so the person can compare it to what's physically printed on the check.  This is a cryptographically secure guarantee that the check is valid (or at worst an exact copy of a real check, which should make tracking down counterfeiters a lot easier).  So you would use this in tandem with traditional anti-forgery measures like watermarks, micro-print, thermal ink, etc.

I've put the code up on GitHub: PaperTrust on GitHub.