Thursday night was our one-month anniversary, so Kyle and I celebrated by attending Livermore's Shakespeare Festival, which was presenting A Midsummer Night's Dream. It was outdoors at Concannon Vineyard, and it's gorgeous up there.

The picnic area opened up before the show, so I got a dinner of fried chicken, corn, and mashed potatoes all ready for when Kyle got home from work. He stopped on the way home and got some beautiful flowers... 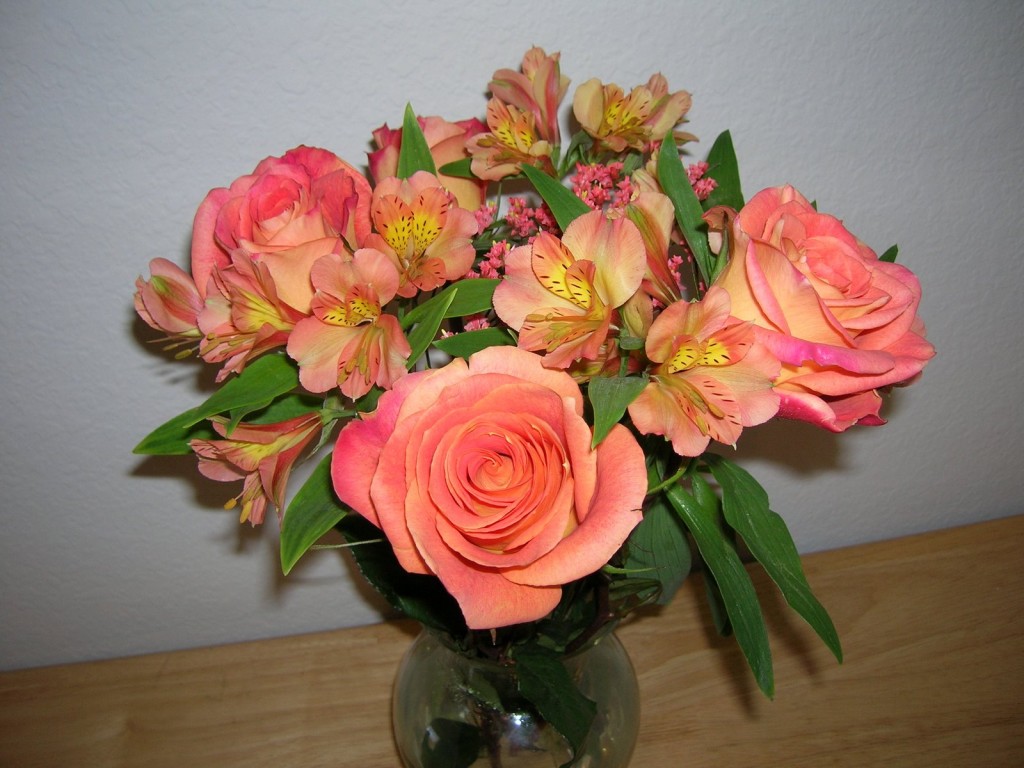 ...and cheesecake. Yes, my husband knows me well. We headed out, parked, picked up our tickets, and set up dinner at a table under an arbor. There were grapes hanging down and everything! The view was amazing--rolling hills, grape vines, rose bushes, and a sunset. It was definitely one of the more picturesque things I've done in my life. And yes, we ate the whole cheesecake (it was a small one, though).

Now, to the actual play. I have a harder time reading Shakespeare's comedies (the tragedies tend to be my favorites). But seeing them performed is another matter entirely! I just struggle with interpreting things properly without any actors to provide intonation or gestures, and what's supposed to be funny often just ends up being confusing. But this performance was wonderful, and we both thoroughly enjoyed it. I laughed myself silly, which is always a good way to celebrate anything.

Yesterday, Kyle told me he was coming home for lunch and mebbe I could pop some popcorn to go with it? (We got an air popper as a wedding gift, and Kyle's been converted.) So I got it all set up and going, then left the room. (Yes, I thought this might not turn out well. I did it anyway. And aren't you glad I did? You know there's awesomeness on the way!)

Well, something sounded off--I think the popping sound stopped rather early--so I ducked back into the kitchen. I found this: 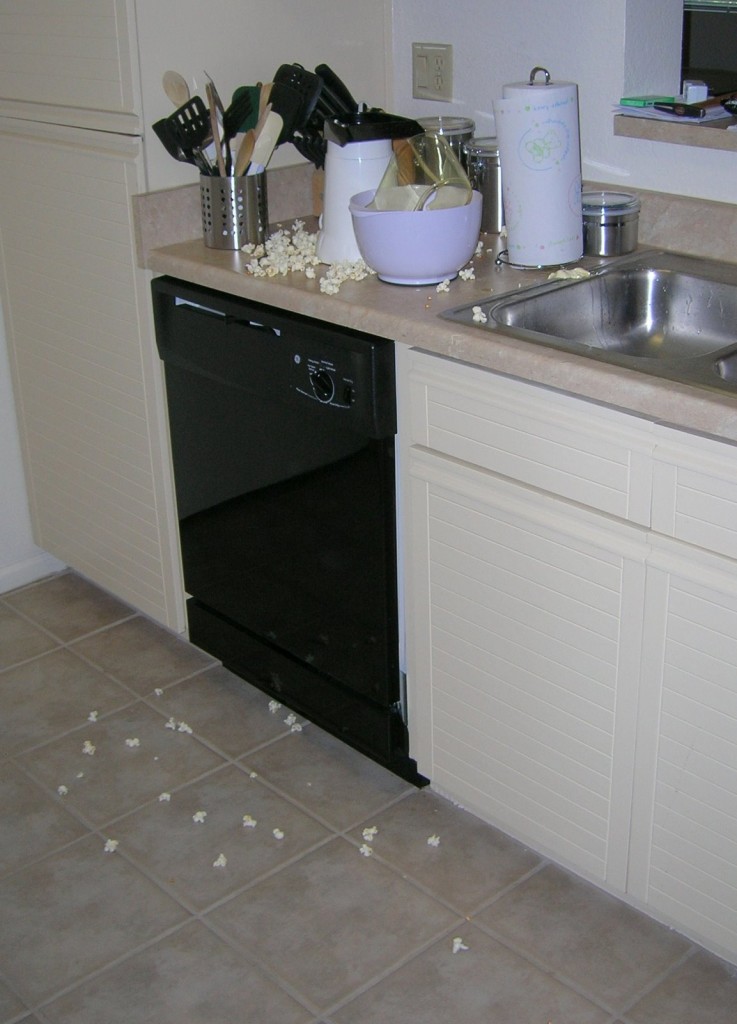 Please note the blob of partially melted butter to the right of the paper towel roll. That was in a little tray atop the popper, melting. Pre-launch, of course. The tray thingie is visible over in the sink.

Needless to say, I was still cleaning up when Kyle got home. Our best guess as to what transpired is that 1) I didn't get the top on securely and/or 2) the corn popped up too quickly and raised the top right off. It was, well, amazing. Just wow.

I have medical insurance again! It's a beautiful thing.

Yep--I have migraine medication again and everything. So lovely.

We went and saw Harry Potter 6 last night. Everyone seems to think it's an incredible movie. I thought it was incredibly flat and lacking almost any substance. Of course when you take a long book and condense it into a movie things are going to get left out, but I think you need to really choose certain scenes and plot points to develop rather than just grazing over everything (and what was the deal with adding an entire scene not in the book which adds nothing to the story?).

So, I don't know what everyone is going crazy about. The piece that the entire book builds toward was entirely anti-climactic for me (No Battle Scene?! They just walk out without any resistance?! Ridiculous!). I was sure that the movie would end with the funeral, but they skipped that entirely too. Instead it's a rather dull scene on top of the astronomy tower.

I think it would have highly benefited from being stretched out another 30 minutes, throw in the fight scene that at least half the audience is waiting for, and develop the important scenes further (the cave lasted all of like 10 minutes).

The book, to me, was mostly to educate us about Voldemort's history. But very little of that comes out in the movie. Since we're not focusing on that, we end up not really focusing on anything, since what Draco is doing is a secret until the very end. So it's kind of like, random thing here, oh Draco acting angsty, another random thing, Dumbledore being vague, Draco being angsty, anti-climactic scene, anti-climactic scene, the end.

Me: I just moved to Livermore from Utah, I need to get a California Driver's License and register my car.
Them: Ok, fill out these forms and take a number.
....
Me: [hands over forms when number is called]
Them: That's $28 for the license and $242 for the registration.
Me: [Grumble, since I just paid $200+ to renew my registration in Utah 3 months ago...]
Them: You'll need to take the written test, but you can't do that now because we don't hand them out after 4:30, and you need to get a smog test done.
Me: [sigh] Ok. Do I get the smog test done here or somewhere else?
Them: You do that here, just come back sometime before 4:30.

Me: I need to take a written test and do a smog test.
Them: Written Test go to window 14, you get the smog test done at a testing facility.
Me: So, not here, like I was told last time.
Them: No, not here.

Me: I have my smog test certificate (another $78.50!) and I need to finish registering my car. [hands over stuff]
Them: You need another signature on this form.
Me: Why?
Them: Because Debora is on the previous registration, so she needs to sign the form as well.
Me: Why didn't someone mention this the last 2 times I was here trying to do this?
Them: They must have overlooked it.

GAH! I've now paid almost $350 and still have nothing. Ok... not quite nothing, I did get the license part done, but I don't actually _have_ a license, I won't get that for another 4 to 6 weeks.

I can tell you exactly why California's government is bankrupt. If the rest of their departments run as efficiently as the DMV there's no reason to wonder. Not to mention that the DMV is only open 4 days a week and closes at 5:00pm. When do they expect people that have jobs to get this done exactly?