I've been telling myself that it's not catastrophic that I'm so far behind in blogging because I have all these pictures, right? The posts may be late, but they'll still happen, so no biggie. But what I haven't been doing is making any other sort of notes about what Corinne is like, and she's already changed so much! Let's see what I can remember. These pics are from April 18 - May 17, when she turned 2 months old. 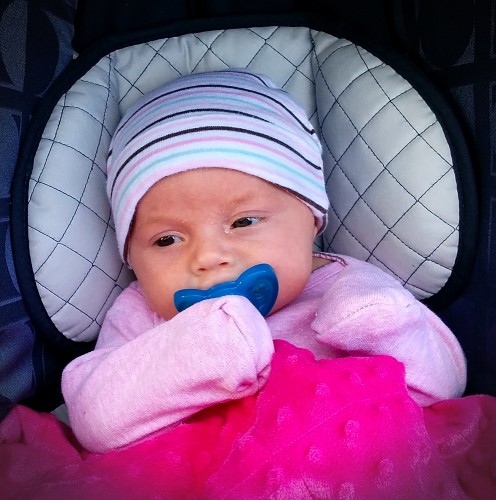 This child does NOT like to be cold. It's just such a contrast to when Heather was a baby, and her issue was being easily overheated. Corinne is the opposite: she gets cold easily, and she hates it. Fortunately, even though it's summer now, we have clothes for winter (from when Heather was her age), so it works out.

She's still sleeping pretty much wherever: 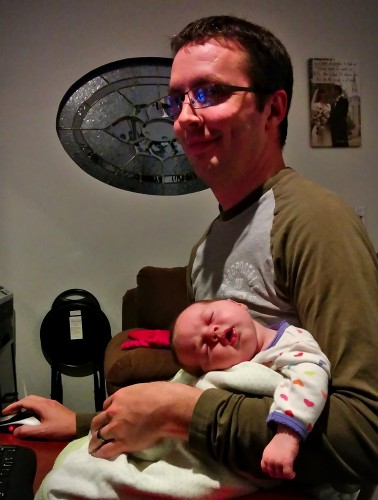 I laid Corinne down on Heather's bed one morning while I was getting Heather ready for the day, and we both thought she looked pretty silly. So we pulled the blanket up and everything, to complete the look. 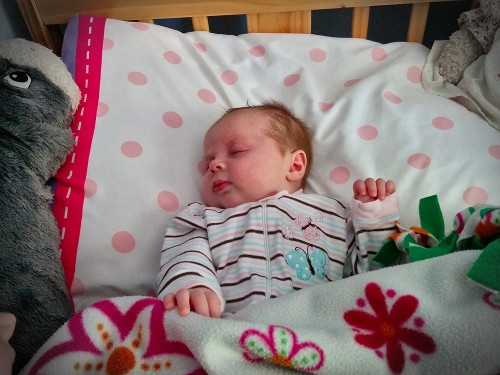 Sucking on her thumb. Not the norm, but it made a cute picture: 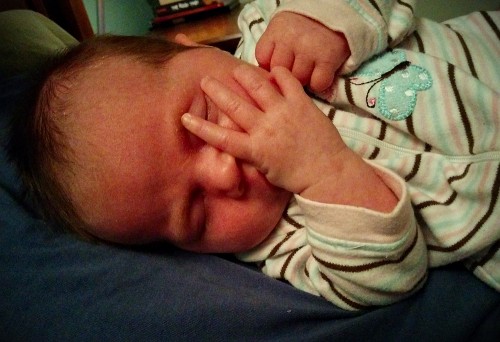 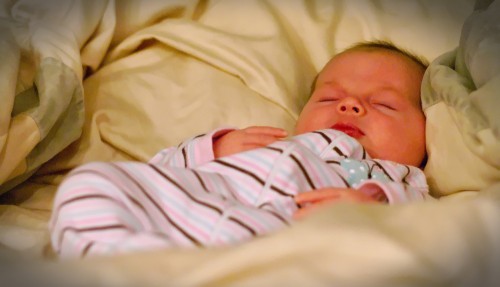 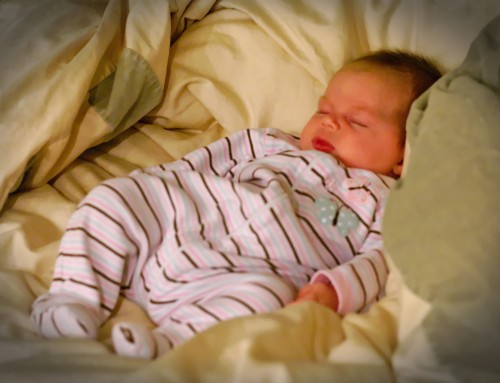 She started batting at toys: 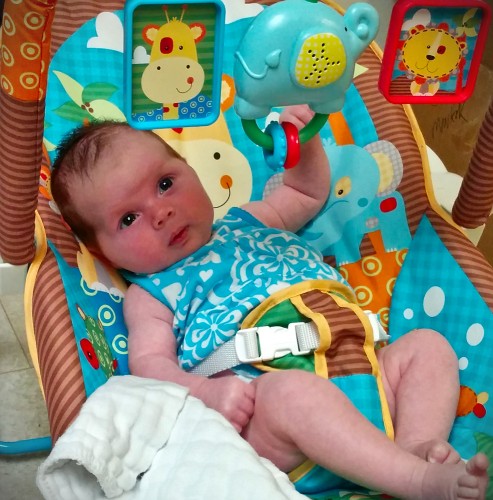 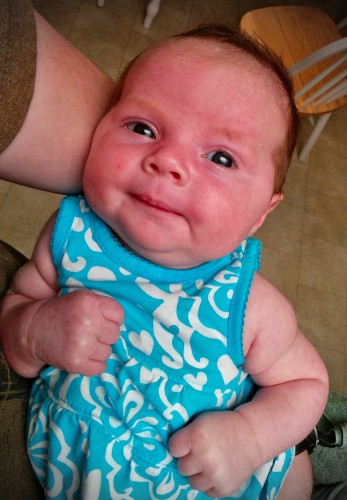 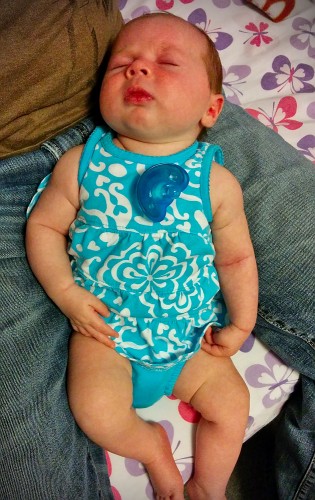 And she started to spend a bit more time awake and alert. I love this picture!

Heather completely adores her little sister. Which is not to say that their interactions are always easy, but the love is there. We do a lot of talking about how you have to be very gentle with babies and let them sleep when they're sleeping...that sort of thing. Heather really likes to help in any way she can, and can't wait for Corinne to become more of a playmate. 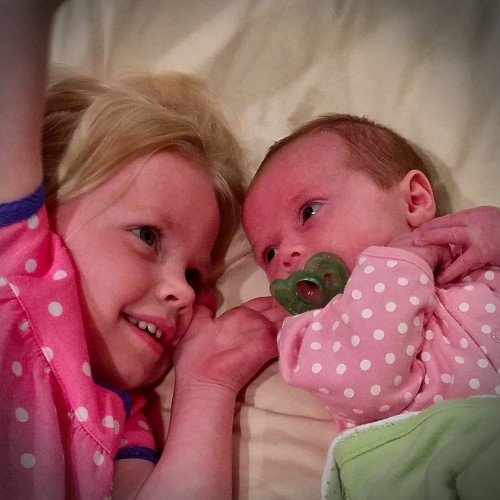 Hee hee. More silly baby, when she was 2 months exactly: 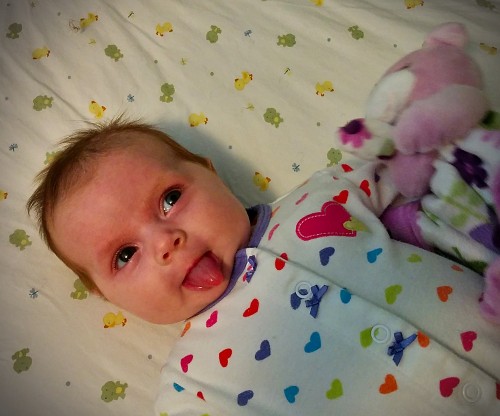 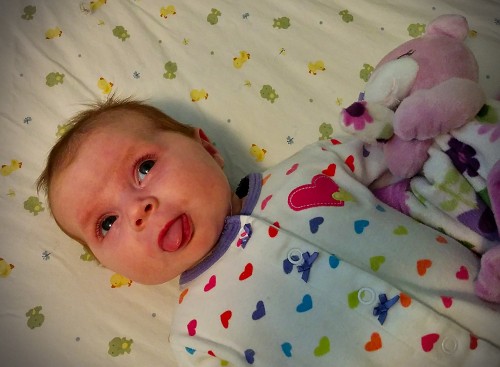 Oh, I can give you some stats. Corinne had her 2-month checkup on May 18. She weighed 10 lbs 6 oz (24th%) and was 22.4" long (27th%). The previous week, I had started noticing some trouble with her feedings: very short, very fussy feedings, mainly. Her doctor suspected reflux, which I had considered, but I didn't realize babies could develop it at 2 months of age; I thought they were born with it or didn't get it. She also started being really fussy after eating, especially if you tried to lay her down, and she got the hiccups a million times a day. She has never done much spitting up at all, but you could hear the stuff coming up into the back of her throat, and then going back down again. And Corinne has always been such a happy, calm baby that these fussy periods were really out of character.

[Since I'm writing this from the future, I can tell you what comes next: I go without dairy for 2 weeks to rule out a dairy sensitivity/allergy, but that doesn't help. (I never realized how much cheese I eat! Goodness, that was hard!) So then we start her on Zantac, to reduce the acidity of her stomach contents. That helps a lot (slightly longer, calmer feedings, and she even starts sleeping through the night!), but she is still fussy after eating, so we add Prevacid. Corinne hates this medication like nothing else on this green earth, but it's really made a difference! I can tell that eating is much more comfortable for her, as is laying flat on her back. So now, at 3.5 months old, I'd say we've got this reflux thing pretty much under control. Hooray!]

Aside from the reflux issue, Corinne is a super chill baby. (And even with that, she's not too bad. It's not one of those nightmare cases you hear horror stories about.) She cries when something is bothering her, and it's not usually too hard to figure out what it is. In general, she goes to sleep easily and just doesn't cause too much of a fuss. We love her!